{{#invoke:Hatnote|hatnote}} Template:Spacetime In physics, the Lorentz transformation (or transformations) is named after the Dutch physicist Hendrik Lorentz. It was the result of attempts by Lorentz and others to explain how the speed of light was observed to be independent of the reference frame, and to understand the symmetries of the laws of electromagnetism. The Lorentz transformation is in accordance with special relativity, but was derived before special relativity.

Many physicists, including Woldemar Voigt, George FitzGerald, Joseph Larmor, and Hendrik Lorentz himself had been discussing the physics implied by these equations since 1887.[1]

Early in 1889, Oliver Heaviside had shown from Maxwell's equations that the electric field surrounding a spherical distribution of charge should cease to have spherical symmetry once the charge is in motion relative to the ether. FitzGerald then conjectured that Heaviside’s distortion result might be applied to a theory of intermolecular forces. Some months later, FitzGerald published the conjecture that bodies in motion are being contracted, in order to explain the baffling outcome of the 1887 ether-wind experiment of Michelson and Morley. In 1892, Lorentz independently presented the same idea in a more detailed manner, which was subsequently called FitzGerald–Lorentz contraction hypothesis.[2] Their explanation was widely known before 1905.[3]

Lorentz (1892–1904) and Larmor (1897–1900), who believed the luminiferous ether hypothesis, were also seeking the transformation under which Maxwell's equations are invariant when transformed from the ether to a moving frame. They extended the FitzGerald–Lorentz contraction hypothesis and found out that the time coordinate has to be modified as well ("local time"). Henri Poincaré gave a physical interpretation to local time (to first order in v/c) as the consequence of clock synchronization, under the assumption that the speed of light is constant in moving frames.[4] Larmor is credited to have been the first to understand the crucial time dilation property inherent in his equations.[5]

In 1905, Poincaré was the first to recognize that the transformation has the properties of a mathematical group, and named it after Lorentz.[6] Later in the same year Albert Einstein published what is now called special relativity, by deriving the Lorentz transformation under the assumptions of the principle of relativity and the constancy of the speed of light in any inertial reference frame, and by abandoning the mechanical aether.[7]

{{safesubst:#invoke:anchor|main}}Below, the Lorentz transformations are called "boosts" in the stated directions.

Boost in the x-direction

These are the simplest forms. The Lorentz transformation for frames in standard configuration can be shown to be (see for example [10] and [11]):

The use of β and γ is standard throughout the literature.[12] For the remainder of the article – they will be also used throughout unless otherwise stated. Since the above is a linear system of equations (more technically a linear transformation), they can be written in matrix form:

According to the principle of relativity, there is no privileged frame of reference, so the inverse transformations frame F′ to frame F must be given by simply negating v:

where the value of γ remains unchanged. These equations are also obtained by algebraically solving the standard equations for the variables t, x, y, z.

Boost in the y or z directions

The above collection of equations apply only for a boost in the x-direction. The standard configuration works equally well in the y or z directions instead of x, and so the results are similar.

where v and so β are now in the y-direction.

where v and so β are now in the z-direction.

The Lorentz or boost matrix is usually denoted by Λ (Greek capital lambda). Above the transformations have been applied to the four-position X,

The Lorentz transform for a boost in one of the above directions can be compactly written as a single matrix equation:

Boost in any direction 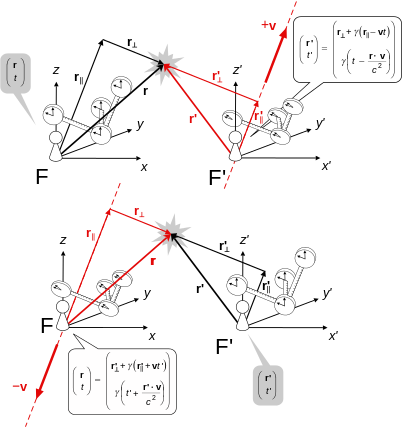 Boost in an arbitrary direction.

where • denotes the dot product (see also orthogonality for more information). Then, only time and the component r‖ in the direction of v;

are "warped" by the Lorentz factor:

The parallel and perpendicular components can be eliminated, by substituting

Since r‖ and v are parallel we have

where geometrically and algebraically:

This method, of eliminating parallel and perpendicular components, can be applied to any Lorentz transformation written in parallel-perpendicular form.

These equations can be expressed in block matrix form as

where I is the 3×3 identity matrix and β = v/c is the relative velocity vector (in units of c) as a column vector – in cartesian and tensor index notation it is:

and β is the magnitude of β:

The transformation Λ can be written in the same form as before,

which has the structure:[13]

and the components deduced from above are:

where δij is the Kronecker delta, and by convention: Latin letters for indices take the values 1, 2, 3, for spatial components of a 4-vector (Greek indices take values 0, 1, 2, 3 for time and space components).

The composition of two Lorentz transformations L(u, U) and L(v, V) which include rotations U and V is given by:[16]

Visualizing the transformations in Minkowski space

Lorentz transformations can be depicted on the Minkowski light cone spacetime diagram.

The momentarily co-moving inertial frames along the world line of a rapidly accelerating observer (center). The vertical direction indicates time, while the horizontal indicates distance, the dashed line is the spacetime trajectory ("world line") of the observer. The small dots are specific events in spacetime. If one imagines these events to be the flashing of a light, then the events that pass the two diagonal lines in the bottom half of the image (the past light cone of the observer in the origin) are the events visible to the observer. The slope of the world line (deviation from being vertical) gives the relative velocity to the observer. Note how the momentarily co-moving inertial frame changes when the observer accelerates.

The yellow axes are the rest frame of an observer, the blue axes correspond to the frame of a moving observer

The red lines are world lines, a continuous sequence of events: straight for an object travelling at constant velocity, curved for an object accelerating. Worldlines of light form the boundary of the light cone.

The purple hyperbolae indicate this is a hyperbolic rotation, the hyperbolic angle ϕ is called rapidity (see below). The greater the relative speed between the reference frames, the more "warped" the axes become. The relative velocity cannot exceed c.

The black arrow is a displacement four-vector between two events (not necessarily on the same world line), showing that in a Lorentz boost; time dilation (fewer time intervals in moving frame) and length contraction (shorter lengths in moving frame) occur. The axes in the moving frame are orthogonal (even though they do not look so).

Then the Lorentz transformation in standard configuration is:

Substituting these expressions into the matrix form of the transformation, it is evident that

Thus, the Lorentz transformation can be seen as a hyperbolic rotation of coordinates in Minkowski space, where the parameter Template:Mvar represents the hyperbolic angle of rotation, often referred to as rapidity. This transformation is sometimes illustrated with a Minkowski diagram, as displayed above.

This 4-by-4 boost matrix can thus be written compactly as a Matrix exponential,

where the simpler Lie-algebraic hyperbolic rotation generator Kx is called a boost generator.

Transformation of other physical quantities

The transformation matrix is universal for all four-vectors, not just 4-dimensional spacetime coordinates. If Z is any four-vector, then:[13]

or in tensor index notation:

More generally, the transformation of any tensor quantity T is given by:[17]

is the inverse matrix of

The crucial insight of Einstein's clock-setting method is the idea that time is relative. In essence, each observer's frame of reference is associated with a unique set of clocks, the result being that time as measured for a location passes at different rates for different observers.[18] This was a direct result of the Lorentz transformations and is called time dilation. We can also clearly see from the Lorentz "local time" transformation that the concept of the relativity of simultaneity and of the relativity of length contraction are also consequences of that clock-setting hypothesis.[19]

Transformation of the electromagnetic field

Lorentz transformations can also be used to prove that magnetic and electric fields are simply different aspects of the same force — the electromagnetic force, as a consequence of relative motion between electric charges and observers.[20] The fact that the electromagnetic field shows relativistic effects becomes clear by carrying out a simple thought experiment:[21]

This shows that the Lorentz transformation also applies to electromagnetic field quantities when changing the frame of reference, given below in vector form.

For relative speeds much less than the speed of light, the Lorentz transformations reduce to the Galilean transformation in accordance with the correspondence principle.

The correspondence limit is usually stated mathematically as: as v → 0, c → ∞. In words: as velocity approaches 0, the speed of light (seems to) approach infinity. Hence, it is sometimes said that nonrelativistic physics is a physics of "instantaneous action at a distance".[18]

In a given coordinate system xμ, if two events A and B are separated by

the spacetime interval between them is given by

This can be written in another form using the Minkowski metric. In this coordinate system,

Then, we can write

or, using the Einstein summation convention,

Now suppose that we make a coordinate transformation xμ → x′ μ. Then, the interval in this coordinate system is given by

It is a result of special relativity that the interval is an invariant. That is, s2 = s′ 2. For this to hold, it can be shown[22] that it is necessary (but not sufficient) for the coordinate transformation to be of the form

Here, Cμ is a constant vector and Λμν a constant matrix, where we require that

Taking the determinant of

A quantity invariant under Lorentz transformations is known as a Lorentz scalar.