Machine learning is a scientific discipline that explores the construction and study of algorithms that can learn from data.[1] Such algorithms operate by building a model based on inputs[2]:2 and using that to make predictions or decisions, rather than following only explicitly programmed instructions.

Machine learning can be considered a subfield of computer science and statistics. It has strong ties to artificial intelligence and optimization, which deliver methods, theory and application domains to the field. Machine learning is employed in a range of computing tasks where designing and programming explicit, rule-based algorithms is infeasible. Example applications include spam filtering, optical character recognition (OCR),[3] search engines and computer vision. Machine learning is sometimes conflated with data mining,[4] although that focuses more on exploratory data analysis.[5] Machine learning and pattern recognition "can be viewed as two facets of the same field."[2]:vii

In 1959, Arthur Samuel defined machine learning as a "Field of study that gives computers the ability to learn without being explicitly programmed".[6]

Tom M. Mitchell provided a widely quoted, more formal definition: "A computer program is said to learn from experience E with respect to some class of tasks T and performance measure P, if its performance at tasks in T, as measured by P, improves with experience E".[7] This definition is notable for its defining machine learning in fundamentally operational rather than cognitive terms, thus following Alan Turing's proposal in Turing's paper "Computing Machinery and Intelligence" that the question "Can machines think?" be replaced with the question "Can machines do what we (as thinking entities) can do?"[8]

{{safesubst:#invoke:anchor|main}} Machine learning tasks are typically classified into three broad categories, depending on the nature of the learning "signal" or "feedback" available to a learning system. These are:[9]

Among other categories of machine learning problems, learning to learn learns its own inductive bias based on previous experience. Developmental learning, elaborated for robot learning, generates its own sequences (also called curriculum) of learning situations to cumulatively acquire repertoires of novel skills through autonomous self-exploration and social interaction with human teachers, and using guidance mechanisms such as active learning, maturation, motor synergies, and imitation.

Another categorization of machine learning tasks arises when one considers the desired output of a machine-learned system:[2]:3 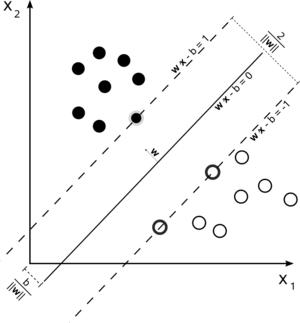 A support vector machine is a classifier that divides its input space into two regions, separated by a linear boundary. Here, it has learned to distinguish black and white circles.

History and relationships to other fields

As a scientific endeavour, machine learning grew out of the quest for artificial intelligence. Already in the early days of AI as an academic discipline, some researchers were interested in having machines learn from data. They attempted to approach the problem with various symbolic methods, as well as what were then termed "neural networks"; mostly perceptrons and other models that were later found to be reinventions of the generalized linear models of statistics. Probabilistic reasoning was also employed, especially in automated medical diagnosis.[9]:488

However, an increasing emphasis on the logical, knowledge-based approach caused a rift between AI and machine learning. Probabilistic systems were plagued by theoretical and practical problems of data acquisition and representation.[9]:488 By 1980, expert systems had come to dominate AI, and statistics was out of favor.[10] Work on symbolic/knowledge-based learning did continue within AI, leading to inductive logic programming,[9]:708–710 but the more statistical line of research was now outside the field of AI proper, in pattern recognition and information retrieval.[9] Neural networks research had been abandoned by AI and computer science around the same time. This line, too, was continued outside the AI/CS field, as "connectionism", by researchers from other disciplines including Hopfield, Rumelhart and Hinton. Their main success came in the mid-1980s with the reinvention of backpropagation.[9]:25

Machine learning, reorganized as a separate field, started to flourish in the 1990s. The field changed its goal from achieving artificial intelligence to tackling solvable problems of a practical nature. It shifted focus away from the symbolic approaches it had inherited from AI, and toward methods and models borrowed from statistics and probability theory.[10] It also benefited from the increasing availability of digitized information, and the possibility to distribute that via the internet.

Machine learning and data mining often employ the same methods and overlap significantly. They can be roughly distinguished as follows:

The two areas overlap in many ways: data mining uses many machine learning methods, but often with a slightly different goal in mind. On the other hand, machine learning also employs data mining methods as "unsupervised learning" or as a preprocessing step to improve learner accuracy. Much of the confusion between these two research communities (which do often have separate conferences and separate journals, ECML PKDD being a major exception) comes from the basic assumptions they work with: in machine learning, performance is usually evaluated with respect to the ability to reproduce known knowledge, while in Knowledge Discovery and Data Mining (KDD) the key task is the discovery of previously unknown knowledge. Evaluated with respect to known knowledge, an uninformed (unsupervised) method will easily be outperformed by supervised methods, while in a typical KDD task, supervised methods cannot be used due to the unavailability of training data.

Machine learning and statistics are closely related fields. According to Michael I. Jordan, the ideas of machine learning, from methodological principles to theoretical tools, have had a long pre-history in statistics.[11] He also suggested the term data science as a placeholder to call the overall field.[11]

Some statisticians have adopted methods from machine learning, leading to a combined field that they call statistical learning.[13]

A core objective of a learner is to generalize from its experience.[2]Template:Full[14] Generalization in this context is the ability of a learning machine to perform accurately on new, unseen examples/tasks after having experienced a learning data set. The training examples come from some generally unknown probability distribution (considered representative of the space of occurrences) and the learner has to build a general model about this space that enables it to produce sufficiently accurate predictions in new cases.

There are many similarities between machine learning theory and statistical inference, although they use different terms.

Decision tree learning uses a decision tree as a predictive model, which maps observations about an item to conclusions about the item's target value.

Association rule learning is a method for discovering interesting relations between variables in large databases.

{{#invoke:main|main}} An artificial neural network (ANN) learning algorithm, usually called "neural network" (NN), is a learning algorithm that is inspired by the structure and functional aspects of biological neural networks. Computations are structured in terms of an interconnected group of artificial neurons, processing information using a connectionist approach to computation. Modern neural networks are non-linear statistical data modeling tools. They are usually used to model complex relationships between inputs and outputs, to find patterns in data, or to capture the statistical structure in an unknown joint probability distribution between observed variables.

Support vector machines (SVMs) are a set of related supervised learning methods used for classification and regression. Given a set of training examples, each marked as belonging to one of two categories, an SVM training algorithm builds a model that predicts whether a new example falls into one category or the other.

{{#invoke:main|main}} Cluster analysis is the assignment of a set of observations into subsets (called clusters) so that observations within the same cluster are similar according to some predesignated criterion or criteria, while observations drawn from different clusters are dissimilar. Different clustering techniques make different assumptions on the structure of the data, often defined by some similarity metric and evaluated for example by internal compactness (similarity between members of the same cluster) and separation between different clusters. Other methods are based on estimated density and graph connectivity. Clustering is a method of unsupervised learning, and a common technique for statistical data analysis.

A Bayesian network, belief network or directed acyclic graphical model is a probabilistic graphical model that represents a set of random variables and their conditional independencies via a directed acyclic graph (DAG). For example, a Bayesian network could represent the probabilistic relationships between diseases and symptoms. Given symptoms, the network can be used to compute the probabilities of the presence of various diseases. Efficient algorithms exist that perform inference and learning.

Several learning algorithms, mostly unsupervised learning algorithms, aim at discovering better representations of the inputs provided during training. Classical examples include principal components analysis and cluster analysis. Representation learning algorithms often attempt to preserve the information in their input but transform it in a way that makes it useful, often as a pre-processing step before performing classification or predictions, allowing to reconstruct the inputs coming from the unknown data generating distribution, while not being necessarily faithful for configurations that are implausible under that distribution.

In this problem, the learning machine is given pairs of examples that are considered similar and pairs of less similar objects. It then needs to learn a similarity function (or a distance metric function) that can predict if new objects are similar. It is sometimes used in Recommendation systems.

In this method, a datum is represented as a linear combination of basis functions, and the coefficients are assumed to be sparse. Let x be a d-dimensional datum, D be a d by n matrix, where each column of D represents a basis function. r is the coefficient to represent x using D. Mathematically, sparse dictionary learning means the following

where r is sparse. Generally speaking, n is assumed to be larger than d to allow the freedom for a sparse representation.

Learning a dictionary along with sparse representations is strongly NP-hard and also difficult to solve approximately.[17] A popular heuristic method for sparse dictionary learning is K-SVD.

Sparse dictionary learning has been applied in several contexts. In classification, the problem is to determine which classes a previously unseen datum belongs to. Suppose a dictionary for each class has already been built. Then a new datum is associated with the class such that it's best sparsely represented by the corresponding dictionary. Sparse dictionary learning has also been applied in image de-noising. The key idea is that a clean image path can be sparsely represented by an image dictionary, but the noise cannot.[18]

A genetic algorithm (GA) is a search heuristic that mimics the process of natural selection, and uses methods such as mutation and crossover to generate new genotype in the hope of finding good solutions to a given problem. In machine learning, genetic algorithms found some uses in the 1980s and 1990s.[19][20]

Applications for machine learning include:

In 2006, the online movie company Netflix held the first "Netflix Prize" competition to find a program to better predict user preferences and improve the accuracy on its existing Cinematch movie recommendation algorithm by at least 10%. A joint team made up of researchers from AT&T Labs-Research in collaboration with the teams Big Chaos and Pragmatic Theory built an ensemble model to win the Grand Prize in 2009 for $1 million.[23]

In 2014 it has been reported that a machine learning algorithm has been applied in Art History to study fine art paintings, and that it may have revealed previously unrecognized influences between artists.[25]

Software suites containing a variety of machine learning algorithms include the following:

mloss is an academic database of open-source machine learning software.