In abstract algebra, a magma (or groupoid; not to be confused with groupoids in category theory) is a basic kind of algebraic structure. Specifically, a magma consists of a set

equipped with a single binary operation

. The binary operation must be closed by definition but no other properties are imposed.

The term groupoid was introduced in 1926 by Heinrich Brandt describing his Brandt groupoid (the English word is a translation of the German Gruppoid). The term was then appropriated by B. A. Hausmann and Øystein Ore (1937)[1] in the sense (of a set with a binary operation) used in this article. In a couple of reviews of subsequent papers in Zentralblatt, Brandt strongly disagreed with this overloading of terminology. The Brandt groupoid is a groupoid in the sense used in category theory, but not in the sense used by Hausmann and Ore. Nevertheless, influential books in semigroup theory, including Clifford and Preston (1961) and Howie (1995) use groupoid in the sense of Hausmann and Ore. Hollings (2014) writes that in the term groupoid is "perhaps most often used in modern mathematics" in the sense given to it in category theory.[2]

According to Bergman and Hausknecht (1996): “There is no generally accepted word for a set with a non necessarily associative binary operation. The word groupoid is used by many universal algebraists, but workers in category theory and related areas object strongly this usage because they use same word to mean "category in which all morphisms are invertible." The term magma was used by Serre [Lie Algebras and Lie Groups, 1965].”[3] It also appears in Bourbaki's Éléments de mathématique, Algèbre, chapitres 1 à 3, 1970.[4]

A magma is a set

matched with an operation "

" that sends any two elements

" is a general placeholder for a properly defined operation. To qualify as a magma, the set and operation

must satisfy the following requirement (known as the magma axiom):

, the result of the operation

And in mathematical notation:

Magmas are not often studied as such; instead there are several different kinds of magmas, depending on what axioms one might require of the operation. Commonly studied types of magmas include 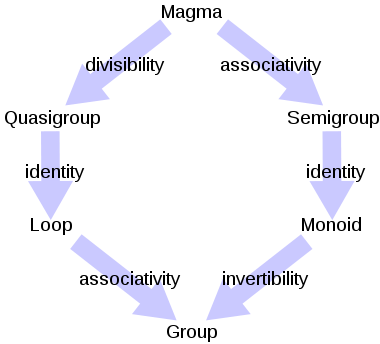 Note that each of divisibility and invertibility
imply the cancellation property.

A morphism of magmas is a function

, that preserves the binary operation:

denote the binary operation on

For the general, non-associative case, the magma operation may be repeatedly iterated. To denote pairings, parentheses are used. The resulting string consists of symbols denoting elements of the magma, and balanced sets of parenthesis. The set of all possible strings of balanced parenthesis is called the Dyck language. The total number of different ways of writing n applications of the magma operator is given by the Catalan number Cn. Thus, for example, C2 = 2, which is just the statement that (ab)c and a(bc) are the only two ways of pairing three elements of a magma with two operations. Less trivially, C3 = 5: ((ab)c)d, (a(bc))d, (ab)(cd), a((bc)d), and a(b(cd)).

is the "most general possible" magma generated by the set

(i.e., there are no relations or axioms imposed on the generators; see free object). It can be described as the set of non-associative words on X with parentheses retained:[6]

It can also be viewed, in terms familiar in computer science, as the magma of binary trees with leaves labelled by elements of

. The operation is that of joining trees at the root. It therefore has a foundational role in syntax.

A free magma has the universal property such that, if

is a function from the set

, then there is a unique extension of

to a morphism of magmas

If • is instead a partial operation, then S is called a partial magma[8] or more often a partial groupoid.[8][9]