Intervals composed of two semitones, such as the major second and the diminished third, are also called tones, whole tones, or whole steps[1] In just intonation, major seconds can occur in at least two different frequency ratios:[2] 9:8 (about 203.9 cents) and 10:9 (about 182.4 cents). The largest (9:8) ones are called major tones or greater tones, the smallest (10:9) are called minor tones or lesser tones. Their size differs by exactly one syntonic comma (81:80, or about 21.5 cents). Some equal temperaments, such as 15-ET and 22-ET, also distinguish between a greater and a lesser tone.

The major second was historically considered one of the most dissonant intervals of the diatonic scale, although much 20th-century music saw it reimagined as a consonance. It is common in many different musical systems, including Arabic music, Turkish music and music of the Balkans, among others. It occurs in both diatonic and pentatonic scales.

Listen to a major second in equal temperament (help·info). Here, middle C is followed by D, which is a tone 200 cents sharper than C, and then by both tones together.

Origin of large and small seconds and thirds in harmonic series.[3]

In tuning systems using just intonation, such as 5-limit tuning, in which major seconds occur in two different sizes, the wider of them is called a major tone or greater tone, and the narrower a minor tone or, lesser tone. The difference in size between a major tone and a minor tone is equal to one syntonic comma (about 21.51 cents).

play (help·info), and it is an approximation thereof in other tuning systems, while the minor tone is the 10:9 ratio[4]

Notice that in these tuning systems, a third kind of whole tone, even wider than the major tone, exists. This interval of two semitones, with ratio 256:225, is simply called the diminished third (for further details, see Five-limit tuning#Size of intervals).

Comparison, in cents, of intervals at or near a major second

In any system where there is only one size of major second, the terms greater and lesser tone (or major and minor tone) are rarely used with a different meaning. Namely, they are used to indicate the two distinct kinds of whole tone, more commonly and more appropriately called major second (M2) and diminished third (d3). Similarly, major semitones and minor semitones are more often and more appropriately referred to as minor seconds (m2) and augmented unisons (A2), or diatonic and chromatic semitones.

Unlike almost all uses of the terms major and minor, these intervals span the same number of semitones. They both span 2 semitones, while, for example, a major third (4 semitones) and minor third (3 semitones) differ by one semitone. Thus, to avoid ambiguity, it is preferable to call them greater tone and lesser tone (see also greater and lesser diesis). 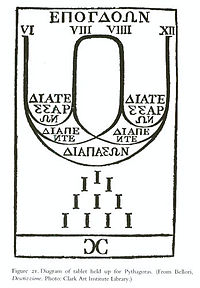 In Pythagorean music theory, the epogdoon (Template:Lang-grc) is the interval with the ratio 9 to 8. The word is composed of the prefix epi- meaning "on top of" and ogdoon meaning "one eighth"; so it means "one eighth in addition". For example, the natural numbers are 8 and 9 in this relation (8+(

According to Plutarch, the Pythagoreans hated the number 17 because it separates the 16 from its Epogdoon 18.[6]