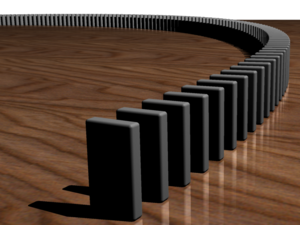 Mathematical induction can be informally illustrated by reference to the sequential effect of falling dominoes.

In 370 BC, Plato's Parmenides may have contained an early example of an implicit inductive proof.[3] The earliest implicit traces of mathematical induction can be found in Euclid's[4] proof that the number of primes is infinite and in Bhaskara's "cyclic method".[5] An opposite iterated technique, counting down rather than up, is found in the Sorites paradox, where one argued that if 1,000,000 grains of sand formed a heap, and removing one grain from a heap left it a heap, then a single grain of sand (or even no grains) forms a heap.

An implicit proof by mathematical induction for arithmetic sequences was introduced in the al-Fakhri written by al-Karaji around 1000 AD, who used it to prove the binomial theorem and properties of Pascal's triangle.Template:Cn

None of these ancient mathematicians, however, explicitly stated the inductive hypothesis. Another similar case (contrary to what Vacca has written, as Freudenthal carefully showed) was that of Francesco Maurolico in his Arithmeticorum libri duo (1575), who used the technique to prove that the sum of the first n odd integers is n2. The first explicit formulation of the principle of induction was given by Pascal in his Traité du triangle arithmétique (1665). Another Frenchman, Fermat, made ample use of a related principle, indirect proof by infinite descent. The inductive hypothesis was also employed by the Swiss Jakob Bernoulli, and from then on it became more or less well known. The modern rigorous and systematic treatment of the principle came only in the 19th century, with George Boole,[6] Augustus de Morgan, Charles Sanders Peirce,[7] Giuseppe Peano, and Richard Dedekind.[5]

The simplest and most common form of mathematical induction infers that a statement involving a natural number n holds for all values of n. The proof consists of two steps:

Mathematical induction can be used to prove that the following statement, which we will call P(n), holds for all natural numbers n.

P(n) gives a formula for the sum of the natural numbers less than or equal to number n. The proof that P(n) is true for each natural number n proceeds as follows.

Inductive step: Show that if P(k) holds, then also P(k + 1) holds. This can be done as follows.

Assume P(k) holds (for some unspecified value of k). It must then be shown that P(k + 1) holds, that is:

Using the induction hypothesis that P(k) holds, the left-hand side can be rewritten to:

Since both the basis and the inductive step have been performed, by mathematical induction, the statement P(n) holds for all natural n. Q.E.D.

Mathematical induction as an inference rule can be formalized as a second-order axiom. The axiom of induction is, in logical symbols,

where P is any predicate and k and n are both natural numbers.

Note that the first quantifier in the axiom ranges over predicates rather than over individual numbers. This is a second-order quantifier, which means that this axiom is stated in second-order logic. Axiomatizing arithmetic induction in first-order logic requires an axiom schema containing a separate axiom for each possible predicate. The article Peano axioms contains further discussion of this issue.

As an inference rule, mathematical induction can be justified as follows. Having proven the base case and the inductive step, then any value can be obtained by performing the inductive step repeatedly. It may be helpful to think of the domino effect. Consider a half line of dominoes each standing on end, and extending infinitely to the right. Suppose that:

With these assumptions one can conclude (using mathematical induction) that all of the dominoes will fall right.

Mathematical induction, as formalized in the second-order axiom above, works because k is used to represent an arbitrary natural number. Then, using the inductive hypothesis, i.e. that P(k) is true, show P(k + 1) is also true. This allows us to "carry" the fact that P(0) is true to the fact that P(1) is also true, and carry P(1) to P(2), etc., thus proving P(n) holds for every natural number n.

Template:No footnotes In practice, proofs by induction are often structured differently, depending on the exact nature of the property to be proved.

Starting at some other number

If we want to prove a statement not for all natural numbers but only for all numbers greater than or equal to a certain number b then:

This can be used, for example, to show that n2 ≥ 3n for n ≥ 3. A more substantial example is a proof that

In this way we can prove that P(n) holds for all n ≥1, or even n ≥−5. This form of mathematical induction is actually a special case of the previous form because if the statement that we intend to prove is P(n) then proving it with these two rules is equivalent with proving P(n + b) for all natural numbers n with the first two steps.

In mathematics, many standard functions, including operations such as "+" and relations such as "=", are binary, meaning that they take two arguments. Often these functions possess properties that implicitly extend them to more than two arguments. For example, once addition a + b is defined and is known to satisfy the associativity property (a + b) + c = a + (b + c), then the ternary addition a + b + c makes sense, either as (a + b) + c or as a + (b + c). Similarly, many axioms and theorems in mathematics are stated only for the binary versions of mathematical operations and relations, and implicitly extend to higher-arity versions.

Suppose that we wish to prove a statement about an n-ary operation implicitly defined from a binary operation, using mathematical induction on n. Then it should come as no surprise that the n = 2 case carries special weight. Here are some examples.

Example: product rule for the derivative

In this example, the binary operation in question is multiplication (of functions). The usual product rule for the derivative taught in calculus states:

or in logarithmic derivative form

This can be generalized to a product of n functions. One has

or in logarithmic derivative form

In each of the n terms of the usual form, just one of the factors is a derivative; the others are not.

When this general fact is proved by mathematical induction, the n = 0 case is trivial,

And for each n ≥ 3, the case is easy to prove from the preceding n − 1 case. The real difficulty lies in the n = 2 case, which is why that is the one stated in the standard product rule.

An alternative way to look at this is to generalize

(a monoid homomorphism) to

Example: Cohen's proof that there is no "horse of a different color"

In this example, the binary relation in question is an equivalence relation applied to horses, such that two horses are equivalent if they are the same color. The argument is essentially identical to the one above, but the crucial n = 1 case fails, causing the entire argument to be invalid.

Joel E. Cohen proposed the following argument, which purports to prove by mathematical induction that all horses are of the same color:[8]

The basis case n = 1 is trivial (as any horse is the same color as itself), and the inductive step is correct in all cases n > 1. However, the logic of the inductive step is incorrect for n = 1, because the statement that "the two sets overlap" is false (there are only n + 1 = 2 horses prior to either removal, and after removal the sets of one horse each do not overlap). Indeed, going from the n = 1 case to the n = 2 case is clearly the crux of the matter; if one could prove the n = 2 case directly without having to infer it from the n = 1 case, then all higher cases would follow from the inductive hypothesis.

Induction on more than one counter

The most common form of induction requires proving that

whereupon the induction principle "automates" n applications of this inference in getting from P(0) to P(n). This could be called "predecessor induction" because each step proves something about a number from something about that number's predecessor.

A variant of interest in computational complexity is "prefix induction", in which one needs to prove

The induction principle then "automates" log(n) applications of this inference in getting from P(0) to P(n). (It's called "prefix induction" because each step proves something about a number from something about the "prefix" of that number formed by truncating the low bit of its binary representation.)

One could take it a step farther to "prefix of prefix induction": one must prove

whereupon the induction principle "automates" log(log(n)) applications of this inference in getting from P(0) to P(n). This form of induction has been used, analogously, to study log-time parallel computation.

Another variant, called complete induction (or strong induction or course of values induction), says that in the second step we may assume not only that the statement holds for n = m but also that it is true for all n less than or equal to m.

{{#invoke:main|main}} The last two steps can be reformulated as one step:

This form of induction, when applied to ordinals (which form a well-ordered and hence well-founded class), is called transfinite induction. It is an important proof technique in set theory, topology and other fields.

Strictly speaking, it is not necessary in transfinite induction to prove the basis, because it is a vacuous special case of the proposition that if P is true of all n < m, then P is true of m. It is vacuously true precisely because there are no values of n < m that could serve as counterexamples.

Equivalence with the well-ordering principle

The principle of mathematical induction is usually stated as an axiom of the natural numbers; see Peano axioms. However, it can be proved from the well-ordering principle. Indeed, suppose the following:

To derive simple induction from these axioms, we must show that if P(n) is some proposition predicated of n, and if:

Proof. Let S be the set of all natural numbers for which P(n) is false. Let us see what happens if we assert that S is nonempty. Well-ordering tells us that S has a least element, say t. Moreover, since P(0) is true, t is not 0. Since every natural number is either zero or some n+1, there is some natural number n such that n+1=t. Now n is less than t, and t is the least element of S. It follows that n is not in S, and so P(n) is true. This means that P(n+1) is true, and so P(t) is true. This is a contradiction, since t was in S. Therefore, S is empty.

It can also be proved that induction, given the other axioms, implies the well-ordering principle.