A mathematical joke is a form of humor which relies on aspects of mathematics or a stereotype of mathematicians to derive humor. The humor may come from a pun, or from a double meaning of a mathematical term, or from a lay person's misunderstanding of a mathematical concept. Mathematician and author John Allen Paulos in his book Mathematics and Humor described several ways that mathematics, generally considered a dry, formal activity, overlaps with humor, a loose, irreverent activity: both are forms of "intellectual play"; both have "logic, pattern, rules, structure"; and both are "economical and explicit".[1]

Some performers combine mathematics and jokes to entertain and/or teach math.[2][3][4] 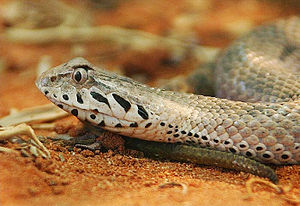 Some jokes use a mathematical term with a second non-technical meaning as the punchline of a joke.

Q. What's purple and commutes?
A. An Abelian grape. (A pun on Abelian group.)[5]

"When Noah sends his animals to go forth and multiply, a pair of snakes replies “We can't multiply, we're adders” — so Noah builds them a log table."[6]

Other jokes create a double meaning from a direct calculation involving facetious variable names, such as this retold from Gravity's Rainbow:[8]

The first part of this joke relies on the fact that the primitive (formed when finding the antiderivative) of the function 1/x is log(x). The second part is then based on the fact that the antiderivative is actually a class of functions, requiring the inclusion of a constant of integration, usually denoted as C—something which calculus students may forget. Thus, the indefinite integral of 1/cabin is "log(cabin) + C", or "A log cabin plus the sea", i.e., "A houseboat".

"There are only 10 types of people in the world: those who understand binary, and those who don't."

This well-known joke[10] mocks phrases that begin with "there are two types of people in the world..." and relies on an ambiguous meaning of the expression 10, which in the binary numeral system is equal to the decimal number two and in any arbitrary numeral system is equal to the number base in use.[11] This can be continued with "There are only 10 types of people in the world: those who understand ternary, those who don't, and those who mistake it for binary" since 10 in ternary is equal to 3 in decimal.

The play on words lies in the similarity of the abbreviation for October/Octal and December/Decimal, and the coincidence that the two representations equal the same amount (

In mathematics, the imaginary number i is defined as the number that solves the equation:

A complex number is a quantity which can be written as the sum of a real number plus an imaginary number.

While a pun has been based upon the constant's name ("complex numbers are all fun and games until someone loses an i"), most jokes treat an imaginary number as if it were a fictional entity. A telephone intercept message of "you have dialed an imaginary number, please rotate your handset ninety degrees and try again" is a typical example.[14]

Some jokes are based on stereotypes of mathematicians tending to think in complicated, abstract terms, causing them to lose touch with the "real world". These compare mathematicians to physicists, engineers, or the "soft" sciences in a form similar to an Englishman, an Irishman and a Scotsman, showing the other scientist doing something practical, while the mathematician proposes a theoretically valid but physically nonsensical solution.

A physicist, a biologist and a mathematician are sitting in a street café watching people entering and leaving the house on the other side of the street. First they see two people entering the house. Time passes. After a while they notice three people leaving the house. The physicist says, "The measurement wasn't accurate." The biologist says, "They must have reproduced." The mathematician says, "If one more person enters the house then it will be empty."[15]

Mathematicians are also shown as averse to making sweeping generalizations from a small amount of data, even if some form of generalization seems plausible:

An astronomer, a physicist and a mathematician are on a train in Scotland. The astronomer looks out of the window, sees a black sheep standing in a field, and remarks, "How odd. All the sheep in Scotland are black!" "No, no, no!" says the physicist. "Only some Scottish sheep are black." The mathematician rolls his eyes at his companions' muddled thinking and says, "In Scotland, there is at least one sheep, at least one side of which appears to be black from here some of the time."[16]

A classic joke involving stereotypes is the "Dictionary of Definitions of Terms Commonly Used in Math Lectures."[17] Examples include "Trivial: If I have to show you how to do this, you're in the wrong class" and "Similarly: At least one line of the proof of this case is the same as before."

This category of jokes comprises those that exploit common misunderstandings of mathematics, or the expectation that most people have only a basic mathematical education, if any.

A museum visitor was admiring a Tyrannosaurus fossil, and asked a nearby museum employee how old it was. "That skeleton's sixty-five million and three years, two months and eighteen days old," the employee replied. "How can you be so precise?" she asked. "Well, when I started working here, I asked a scientist the exact same question, and he said it was sixty-five million years old—and that was three years, two months and eighteen days ago."[18]

The joke is that the employee fails to understand the scientist's implication of the uncertainty in the age of the fossil and uses false precision.

A form of mathematical humor comes from using mathematical tools (both abstract symbols and physical objects such as calculators) in various ways which transgress their intended scope. These constructions are generally devoid of any substantial mathematical content, besides some basic arithmetic.

A set of equivocal jokes applies mathematical reasoning to situations where it is not entirely valid. Many of these are based on a combination of well-known quotes and basic logical constructs such as syllogisms:

Another set of jokes relate to the absence of mathematical reasoning, or misinterpretation of conventional notation:

Another variant of this joke cancels out digits within the numerator and denominator of a fraction:

This produces the correct answer, but uses improper arithmetic.

This appears to prove that 1 = 2, but uses division by zero to produce the result.[21]

Sagan (number) has been defined as "billions and billions", a metric of the number of stars in the observable universe.[22][23]

Similarly, Jenny's constant has been defined as

The mathematical constant 42 appears throughout the Douglas Adams trilogy The Hitchhiker's Guide to the Galaxy, where it is portrayed as "the answer to the ultimate question of life, the universe and everything".[25] The number appears as a fixed value in the TIFF image file format and its derivatives (including for example the ISO standard TIFF/EP) where the content of bytes 2–3 is defined as 42: "An arbitrary but carefully chosen number that further identifies the file as a TIFF file".[26]

Calculator spelling is the formation of words and phrases by displaying a number and turning the calculator upside down.[27] The jest may be formulated as a mathematical problem where the result, when read upside down, appears to be an identifiable phrase like "ShELL OIL" or "Esso" using seven-segment display character representations where the open-top "4" is an inverted 'h' and '5' looks like 'S'. Other letters can be used as numbers too with 8 and 9 representing B and G, respectively.

A mathematical limerick is an expression which, when read aloud, matches the form of a limerick. The following example is attributed to Leigh Mercer:[28]

This is read as follows:

A dozen, a gross, and a score
Plus three times the square root of four
Divided by seven
Plus five times eleven
Is nine squared and not a bit more.

A continuous deformation (homeomorphism) of a coffee cup into a doughnut (torus) and back.

An oft-repeated joke is that topologists can't tell a coffee cup from a doughnut,[29] since a sufficiently pliable doughnut could be reshaped (by a homeomorphism) to the form of a cup by creating a dimple and progressively enlarging it, while shrinking the hole into a handle.