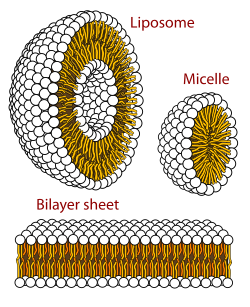 Cross-section view of the structures that can be formed by phospholipids in aqueous solutions (Note that, unlike this illustration, micelles are usually formed by single-chain lipids, since it is tough to fit two chains into this shape) 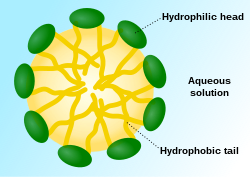 Micelle: Particle of colloidal dimensions that exists in equilibrium with the
molecules or ions in solution from which it is formed.

Note: Based on definition in ref.[1]

Micelle (polymers): Organized auto-assembly formed in a liquid and
composed of amphiphilic macromolecules, in general amphiphilic di-
or tri-block copolymers made of solvophilic and solvophobic blocks.

Note 1: An amphiphilic behavior can be observed for water and an organic
solvent or between two organic solvents.

Note 2: Polymeric micelles have a much lower critical micellar concentration
(CMC) than soap or surfactant micelles, but are nevertheless at equilibrium
with isolated macromolecules called unimers. Therefore, micelle formation
and stability are concentration-dependent.[3]

A micelle (Template:IPAc-en) or micella (Template:IPAc-en) (plural micelles or micellae, respectively) is an aggregate of surfactant molecules dispersed in a liquid colloid. A typical micelle in aqueous solution forms an aggregate with the hydrophilic "head" regions in contact with surrounding solvent, sequestering the hydrophobic single-tail regions in the micelle centre. This phase is caused by the packing behavior of single-tail lipids in a bilayer. The difficulty filling all the volume of the interior of a bilayer, while accommodating the area per head group forced on the molecule by the hydration of the lipid head group, leads to the formation of the micelle. This type of micelle is known as a normal-phase micelle (oil-in-water micelle). Inverse micelles have the head groups at the centre with the tails extending out (water-in-oil micelle). Micelles are approximately spherical in shape. Other phases, including shapes such as ellipsoids, cylinders, and bilayers, are also possible. The shape and size of a micelle are a function of the molecular geometry of its surfactant molecules and solution conditions such as surfactant concentration, temperature, pH, and ionic strength. The process of forming micelles is known as micellisation and forms part of the phase behaviour of many lipids according to their polymorphism.

The ability of a soapy solution to act as a detergent has been recognized for centuries. However, it is only at the beginning of the twentieth century that the constitution of such solutions was scientifically studied. Pioneering work in this area was carried out by James William McBain at the University of Bristol. As early as 1913, he postulated the existence of “colloidal ions” to explain the good electrolytic conductivity of sodium palmitate solutions.[4] These highly mobile, spontaneously formed clusters came to be called micelles, a term borrowed from biology and popularized by G.S. Hartley in his classic book Paraffin Chain Salts: A Study in Micelle Formation.[5]

Micelles composed of ionic surfactants have an electrostatic attraction to the ions that surround them in solution, the latter known as counterions. Although the closest counterions partially mask a charged micelle (by up to 90%), the effects of micelle charge affect the structure of the surrounding solvent at appreciable distances from the micelle. Ionic micelles influence many properties of the mixture, including its electrical conductivity. Adding salts to a colloid containing micelles can decrease the strength of electrostatic interactions and lead to the formation of larger ionic micelles.[6] This is more accurately seen from the point of view of an effective charge in hydration of the system.

{{#invoke:see also|seealso}} Micelles form only when the concentration of surfactant is greater than the critical micelle concentration (CMC), and the temperature of the system is greater than the critical micelle temperature, or Krafft temperature. The formation of micelles can be understood using thermodynamics: Micelles can form spontaneously because of a balance between entropy and enthalpy. In water, the hydrophobic effect is the driving force for micelle formation, despite the fact that assembling surfactant molecules together reduces their entropy. At very low concentrations of the lipid, only monomers are present in true solution. As the concentration of the lipid is increased, a point is reached at which the unfavorable entropy considerations, derived from the hydrophobic end of the molecule, become dominant. At this point, the lipid hydrocarbon chains of a portion of the lipids must be sequestered away from the water. Therefore, the lipid starts to form micelles. In broad terms, above the CMC, the entropic penalty of assembling the surfactant molecules is less than the entropic penalty of caging the surfactant monomers with water molecules. Also important are enthalpic considerations, such as the electrostatic interactions that occur between the charged parts of surfactants.

is the surfactant tail volume,

is the tail length, and

is the equilibrium area per molecule at the aggregate surface.

In a non-polar solvent, it is the exposure of the hydrophilic head groups to the surrounding solvent that is energetically unfavourable, giving rise to a water-in-oil system. In this case, the hydrophilic groups are sequestered in the micelle core and the hydrophobic groups extend away from the centre. These inverse micelles are proportionally less likely to form on increasing headgroup charge, since hydrophilic sequestration would create highly unfavorable electrostatic interactions.

When surfactants are present above the CMC (Critical micelle concentration), they can act as emulsifiers that will allow a compound that is normally insoluble (in the solvent being used) to dissolve. This occurs because the insoluble species can be incorporated into the micelle core, which is itself solubilized in the bulk solvent by virtue of the head groups' favorable interactions with solvent species. The most common example of this phenomenon is detergents, which clean poorly soluble lipophilic material (such as oils and waxes) that cannot be removed by water alone. Detergents clean also by lowering the surface tension of water, making it easier to remove material from a surface. The emulsifying property of surfactants is also the basis for emulsion polymerization.

Micelle formation is essential for the absorption of fat-soluble vitamins and complicated lipids within the human body. Bile salts formed in the liver and secreted by the gall bladder allow micelles of fatty acids to form. This allows the absorption of complicated lipids (e.g., lecithin) and lipid-soluble vitamins (A, D, E, and K) within the micelle by the small intestine.

Micelles can also be used for targeted drug delivery as gold nanoparticles.[8]