where a, b, c, and d are integers, and ad − bc = 1. The group operation is function composition.

where a, b, c, and d are integers, ad − bc = 1, and pairs of matrices A and −A are considered to be identical. The group operation is the usual multiplication of matrices.

The unit determinant of

implies that the fractions a/b, a/c, c/d and b/d are all irreducible, that is have no common factors (provided the denominators are non-zero, of course). More generally, if p/q is an irreducible fraction, then

Elements of the modular group provide a symmetry on the two-dimensional lattice. Let

be two complex numbers whose ratio is not real. Then the set of points

is a lattice of parallelograms on the plane. A different pair of vectors

will generate exactly the same lattice if and only if

for some matrix in S*L(2, Z). It is for this reason that doubly periodic functions, such as elliptic functions, possess a modular group symmetry.

The action of the modular group on the rational numbers can most easily be understood by envisioning a square grid, with grid point (p, q) corresponding to the fraction p/q (see Euclid's orchard). An irreducible fraction is one that is visible from the origin; the action of the modular group on a fraction never takes a visible (irreducible) to a hidden (reducible) one, and vice versa.

are two successive convergents of a continued fraction, then the matrix

belongs to S*L(2, Z). In particular, if bc − ad = 1 for positive integers a,b,c and d with a < b and c < d then a/b and c/d will be neighbours in the Farey sequence of order min(b, d). Important special cases of continued fraction convergents include the Fibonacci numbers and solutions to Pell's equation. In both cases, the numbers can be arranged to form a semigroup subset of the modular group.

so that every element in the modular group can be represented (in a non-unique way) by the composition of powers of S and T. Geometrically, S represents inversion in the unit circle followed by reflection with respect to the origin, while T represents a unit translation to the right.

The generators S and T obey the relations S2 = 1 and (ST)3 = 1. It can be shown [1] that these are a complete set of relations, so the modular group has the presentation:

This presentation describes the modular group as the rotational triangle group (2,3,∞) (∞ as there is no relation on T), and it thus maps onto all triangle groups (2,3,n) by adding the relation Tn = 1, which occurs for instance in the congruence subgroup Γ(n).

Using the generators S and ST instead of S and T, this shows that the modular group is isomorphic to the free product of the cyclic groups C2 and C3:

The braid group B3 is the universal central extension of the modular group.

The braid group B3 is the universal central extension of the modular group, with these sitting as lattices inside the (topological) universal covering group

The braid group B3 in turn is isomorphic to the knot group of the trefoil knot.

The quotients by congruence subgroups are of significant interest.

Other important quotients are the (2,3,n) triangle groups, which correspond geometrically to descending to a cylinder, quotienting the x coordinate mod n, as Tn = (z ↦ z+n). (2,3,5) is the group of icosahedral symmetry, and the (2,3,7) triangle group (and associated tiling) is the cover for all Hurwitz surfaces.

where a, b, c, and d are integers, instead of the usual real numbers, and ad − bc = 1. Put differently, the group PSL(2, R) acts on the upper half-plane H according to the following formula:

Tessellation of the hyperbolic plane 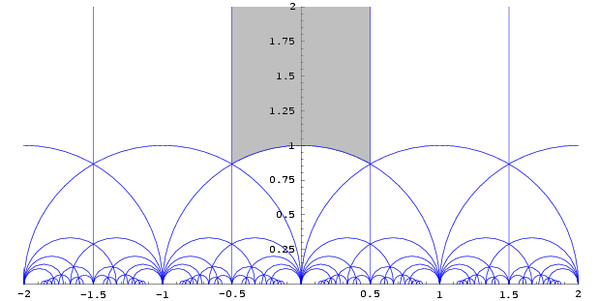 A typical fundamental domain for the action of Γ on the upper half-plane.

The modular group Γ acts on H as a discrete subgroup of PSL(2, R), i.e. for each z in H we can find a neighbourhood of z which does not contain any other element of the orbit of z. This also means that we can construct fundamental domains, which (roughly) contain exactly one representative from the orbit of every z in H. (Care is needed on the boundary of the domain.)

There are many ways of constructing a fundamental domain, but a common choice is the region

By transforming this region in turn by each of the elements of the modular group, a regular tessellation of the hyperbolic plane by congruent hyperbolic triangles is created. Note that each such triangle has one vertex either at infinity or on the real axis Im(z)=0. This tiling can be extended to the Poincaré disk, where every hyperbolic triangle has one vertex on the boundary of the disk. The tiling of the Poincaré disk is given in a natural way by the J-invariant, which is invariant under the modular group, and attains every complex number once in each triangle of these regions.

This tessellation can be refined slightly, dividing each region into two halves (conventionally colored black and white), by adding an orientation-reversing map; the colors then correspond to orientation of the domain. Adding in (x, y) ↦ (−x, y) and taking the right half of the region R (Re(z) ≥ 0) yields the usual tessellation. This tessellation first appears in print in Template:Harv,[3] where it is credited to Richard Dedekind, in reference to Template:Harv.[3][4]

The map of groups (2,3,∞) → (2,3,n) (from modular group to triangle group) can be visualized in terms of this tiling (yielding a tiling on the modular curve), as depicted in the video at right.

{{#invoke:main|main}} Important subgroups of the modular group Γ, called congruence subgroups, are given by imposing congruence relations on the associated matrices.

There is a natural homomorphism SL(2, Z) → SL(2, Z/NZ) given by reducing the entries modulo N. This induces a homomorphism on the modular group PSL(2, Z) → PSL(2, Z/NZ). The kernel of this homomorphism is called the principal congruence subgroup of level N, denoted Γ(N). We have the following short exact sequence:

Being the kernel of a homomorphism Γ(N) is a normal subgroup of the modular group Γ. The group Γ(N) is given as the set of all modular transformations

The principal congruence subgroup of level 2, Γ(2), is also called the modular group Λ. Since PSL(2, Z/2Z) is isomorphic to S3, Λ is a subgroup of index 6. The group Λ consists of all modular transformations for which a and d are odd and b and c are even.

Another important family of congruence subgroups are the modular group Γ0(N) defined as the set of all modular transformations for which c ≡ 0 (mod N), or equivalently, as the subgroup whose matrices become upper triangular upon reduction modulo N. Note that Γ(N) is a subgroup of Γ0(N). The modular curves associated with these groups are an aspect of monstrous moonshine – for a prime number p, the modular curve of the normalizer is genus zero if and only if p divides the order of the monster group, or equivalently, if p is a supersingular prime.

One important subset of the modular group is the dyadic monoid, which is the monoid of all strings of the form STkSTmSTn ... for positive integers k, m, n, ... . This monoid occurs naturally in the study of fractal curves, and describes the self-similarity symmetries of the Cantor function, Minkowski's question mark function, and the Koch curve, each being a special case of the general de Rham curve. The monoid also has higher-dimensional linear representations; for example, the N = 3 representation can be understood to describe the self-symmetry of the blancmange curve.

Maps of the torus

The modular group can be generalized to the Hecke groups, named for Erich Hecke, and defined as follows.[6]

The Hecke group Hq is the discrete group generated by

The modular group Γ is isomorphic to H3 and they share properties and applications – for example, just as one has the free product of cyclic groups

more generally one has

which corresponds to the triangle group (2,q,∞). There is similarly a notion of principal congruence subgroups associated to principal ideals in Z[λ]. For small values of q, one has:

The modular group and its subgroups were first studied in detail by Richard Dedekind and by Felix Klein as part of his Erlangen programme in the 1870s. However, the closely related elliptic functions were studied by Joseph Louis Lagrange in 1785, and further results on elliptic functions were published by Carl Gustav Jakob Jacobi and Niels Henrik Abel in 1827.