In electronics and telecommunications, modulation is the process of varying one or more properties of a periodic waveform, called the carrier signal, with a modulating signal that typically contains information to be transmitted.

In telecommunications, modulation is the process of conveying a message signal, for example a digital bit stream or an analog audio signal, inside another signal that can be physically transmitted. Modulation of a sine waveform transforms a baseband message signal into a passband signal.

The aim of digital modulation is to transfer a digital bit stream over an analog bandpass channel, for example over the public switched telephone network (where a bandpass filter limits the frequency range to 300–3400 Hz), or over a limited radio frequency band.

The aim of analog modulation is to transfer an analog baseband (or lowpass) signal, for example an audio signal or TV signal, over an analog bandpass channel at a different frequency, for example over a limited radio frequency band or a cable TV network channel.

The aim of digital baseband modulation methods, also known as line coding, is to transfer a digital bit stream over a baseband channel, typically a non-filtered copper wire such as a serial bus or a wired local area network.

The aim of pulse modulation methods is to transfer a narrowband analog signal, for example a phone call over a wideband baseband channel or, in some of the schemes, as a bit stream over another digital transmission system.

In music synthesizers, modulation may be used to synthesise waveforms with an extensive overtone spectrum using a small number of oscillators. In this case the carrier frequency is typically in the same order or much lower than the modulating waveform. See for example frequency modulation synthesis or ring modulation synthesis.

A low-frequency message signal (top) may be carried by an AM or FM radio wave. 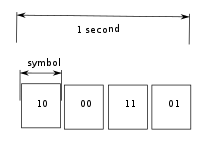 A simple example: A telephone line is designed for transferring audible sounds, for example tones, and not digital bits (zeros and ones). Computers may however communicate over a telephone line by means of modems, which are representing the digital bits by tones, called symbols. If there are four alternative symbols (corresponding to a musical instrument that can generate four different tones, one at a time), the first symbol may represent the bit sequence 00, the second 01, the third 10 and the fourth 11. If the modem plays a melody consisting of 1000 tones per second, the symbol rate is 1000 symbols/second, or baud. Since each tone (i.e., symbol) represents a message consisting of two digital bits in this example, the bit rate is twice the symbol rate, i.e. 2000 bits per second. This is similar to the technique used by dialup modems as opposed to DSL modems.

The most fundamental digital modulation techniques are based on keying:

In QAM, an inphase signal (or I, with one example being a cosine waveform) and a quadrature phase signal (or Q, with an example being a sine wave) are amplitude modulated with a finite number of amplitudes, and then summed. It can be seen as a two-channel system, each channel using ASK. The resulting signal is equivalent to a combination of PSK and ASK.

If the alphabet consists of

alternative symbols, each symbol represents a message consisting of N bits. If the symbol rate (also known as the baud rate) is

symbols/second (or baud), the data rate is

For example, with an alphabet consisting of 16 alternative symbols, each symbol represents 4 bits. Thus, the data rate is four times the baud rate.

Modulator and detector principles of operation

PSK and ASK, and sometimes also FSK, are often generated and detected using the principle of QAM. The I and Q signals can be combined into a complex-valued signal I+jQ (where j is the imaginary unit). The resulting so called equivalent lowpass signal or equivalent baseband signal is a complex-valued representation of the real-valued modulated physical signal (the so-called passband signal or RF signal).

These are the general steps used by the modulator to transmit data:

At the receiver side, the demodulator typically performs:

Non-coherent modulation methods do not require a receiver reference clock signal that is phase synchronized with the sender carrier wave. In this case, modulation symbols (rather than bits, characters, or data packets) are asynchronously transferred. The opposite is coherent modulation.

The most common digital modulation techniques are:

MSK and GMSK are particular cases of continuous phase modulation. Indeed, MSK is a particular case of the sub-family of CPM known as continuous-phase frequency-shift keying (CPFSK) which is defined by a rectangular frequency pulse (i.e. a linearly increasing phase pulse) of one symbol-time duration (total response signaling).

OFDM is based on the idea of frequency-division multiplexing (FDM), but the multiplexed streams are all parts of a single original stream. The bit stream is split into several parallel data streams, each transferred over its own sub-carrier using some conventional digital modulation scheme. The modulated sub-carriers are summed to form an OFDM signal. This dividing and recombining helps with handling channel impairments. OFDM is considered as a modulation technique rather than a multiplex technique, since it transfers one bit stream over one communication channel using one sequence of so-called OFDM symbols. OFDM can be extended to multi-user channel access method in the orthogonal frequency-division multiple access (OFDMA) and multi-carrier code division multiple access (MC-CDMA) schemes, allowing several users to share the same physical medium by giving different sub-carriers or spreading codes to different users.

Automatic digital modulation recognition in intelligent communication systems is one of the most important issues in software defined radio and cognitive radio. According to incremental expanse of intelligent receivers, automatic modulation recognition becomes a challenging topic in telecommunication systems and computer engineering. Such systems have many civil and military applications. Moreover, blind recognition of modulation type is an important problem in commercial systems, especially in software defined radio. Usually in such systems, there are some extra information for system configuration, but considering blind approaches in intelligent receivers, we can reduce information overload and increase transmission performance.[1] Obviously, with no knowledge of the transmitted data and many unknown parameters at the receiver, such as the signal power, carrier frequency and phase offsets, timing information, etc., blind identification of the modulation is a difficult task. This becomes even more challenging in real-world scenarios with multipath fading, frequency-selective and time-varying channels.[2]

There are two main approaches to automatic modulation recognition. The first approach uses likelihood-based methods to assign an input signal to a proper class. Another recent approach is based on feature extraction.

The term digital baseband modulation (or digital baseband transmission) is synonymous to line codes. These are methods to transfer a digital bit stream over an analog baseband channel (a.k.a. lowpass channel) using a pulse train, i.e. a discrete number of signal levels, by directly modulating the voltage or current on a cable. Common examples are unipolar, non-return-to-zero (NRZ), Manchester and alternate mark inversion (AMI) codings.[3]

Pulse modulation schemes aim at transferring a narrowband analog signal over an analog baseband channel as a two-level signal by modulating a pulse wave. Some pulse modulation schemes also allow the narrowband analog signal to be transferred as a digital signal (i.e. as a quantized discrete-time signal) with a fixed bit rate, which can be transferred over an underlying digital transmission system, for example some line code. These are not modulation schemes in the conventional sense since they are not channel coding schemes, but should be considered as source coding schemes, and in some cases analog-to-digital conversion techniques.