The multivariate normal distribution of a k-dimensional random vector x = [X1, X2, …, Xk] can be written in the following notation:

or to make it explicitly known that X is k-dimensional,

A random vector x = (X1, …, Xk)' is said to have the multivariate normal distribution if it satisfies the following equivalent conditions.[1]

The covariance matrix is allowed to be singular (in which case the corresponding distribution has no density). This case arises frequently in statistics; for example, in the distribution of the vector of residuals in the ordinary least squares regression. Note also that the Xi are in general not independent; they can be seen as the result of applying the matrix A to a collection of independent Gaussian variables z. 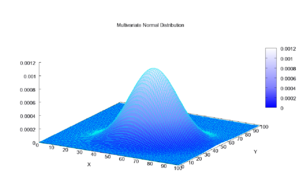 is positive definite. In this case the distribution has density[2]

is the determinant of

. Note how the equation above reduces to that of the univariate normal distribution if

Each iso-density locus—the locus of points in k-dimensional space each of which gives the same particular value of the density—is an ellipse or its higher-dimensional generalization; hence the multivariate normal is a special case of the elliptical distributions.

in the non-degenerate multivariate normal distribution equation is known as the square of the Mahalanobis distance, which represents the distance of the test point

. Note that in case when

In the 2-dimensional nonsingular case (k = rank(Σ) = 2), the probability density function of a vector [X Y]′ is

where ρ is the correlation between X and Y and where

In the bivariate case, the first equivalent condition for multivariate normality can be made less restrictive: it is sufficient to verify that countably many distinct linear combinations of X and Y are normal in order to conclude that the vector [X Y]′ is bivariate normal.[3]

The bivariate iso-density loci plotted in the x,y-plane are ellipses. As the correlation parameter ρ increases, these loci appear to be squeezed to the following line :

This is because the above expression - but without the rho being inside a signum function - is the best linear unbiased prediction of Y given a value of X.[4]

If the covariance matrix

is not full rank, then the multivariate normal distribution is degenerate and does not have a density. More precisely, it does not have a density with respect to k-dimensional Lebesgue measure (which is the usual measure assumed in calculus-level probability courses). Only random vectors whose distributions are absolutely continuous with respect to a measure are said to have densities (with respect to that measure). To talk about densities but avoid dealing with measure-theoretic complications it can be simpler to restrict attention to a subset of

of the coordinates of

To talk about densities meaningfully in the singular case, then, we must select a different base measure. Using the disintegration theorem we can define a restriction of Lebesgue measure to the

where the Gaussian distribution is supported, i.e.

. With respect to this measure the distribution has density:

is the generalized inverse and det* is the pseudo-determinant.[5]

The central k-order central moments are given as follows

where the sum is taken over all allocations of the set

into λ (unordered) pairs. That is, if you have a kth ( = 2λ = 6) central moment, you will be summing the products of λ = 3 covariances (the -μ notation has been dropped in the interests of parsimony):

by the corresponding terms of the list consisting of r1 ones, then r2 twos, etc.. To illustrate this, examine the following 4th-order central moment case:

is the covariance of xi and xj. The idea with the above method is you first find the general case for a kth moment where you have k different x variables -

and then you can simplify this accordingly. Say, you have

then you simply let xi = xj and realise that

i.e. with the conjugate transpose (indicated by

) replacing the normal transpose (indicated by

). A similar notation is used for multiple linear regression.[6]

The differential entropy of the multivariate normal distribution is[7]

where the bars denote the matrix determinant.

The Kullback–Leibler divergence from

is the dimension of the vector space.

The logarithm must be taken to base e since the two terms following the logarithm are themselves base-e logarithms of expressions that are either factors of the density function or otherwise arise naturally. The equation therefore gives a result measured in nats. Dividing the entire expression above by loge 2 yields the divergence in bits.

from the Gaussian, a direct generalization of the standard deviation .[9] In order to compute the values of this function, closed analytic formulae exist.[9]

Another way to extend the notion of cumulative distribution function is to define the cumulative distribution function (cdf) F(x0) of a random vector x as the probability that all components of x are less than or equal to the corresponding values in the vector x0. Though there is no closed form for F(x), there are a number of algorithms that estimate it numerically.[10]

is the known covariance matrix and

is the quantile function for probability

of the chi-squared distribution with

the expression defines the interior of an ellipse and the chi-squared distribution simplifies to an exponential distribution with mean equal to two.

If μ and Σ are partitioned as follows

is the generalized inverse of

Note that knowing that x2 = a alters the variance, though the new variance does not depend on the specific value of a; perhaps more surprisingly, the mean is shifted by

; compare this with the situation of not knowing the value of a, in which case x1 would have distribution

An interesting fact derived in order to prove this result, is that the random vectors

The matrix Σ12Σ22−1 is known as the matrix of regression coefficients.

In the bivariate case where x is partitioned into X1 and X2, the conditional distribution of X1 given X2 is[13]

is the correlation coefficient between X1 and X2.

In the general case

The conditional expectation of X1 given X2 is:

Proof: the result is simply obtained taking the expectation of the conditional distribution

In the standard normal case

The conditional expectation of X1 given X2 is:

where the final ratio here is called the inverse Mills ratio.

Proof: the last two results are obtained using the result

and then using the properties of the expectation of a truncated normal distribution.

If y = c + Bx is an affine transformation of

where c is an

vector of constants and B is a constant

. In particular, any subset of the xi has a marginal distribution that is also multivariate normal. To see this, consider the following example: to extract the subset (x1, x2, x4)T, use

which extracts the desired elements directly.

Another corollary is that the distribution of Z = b · x, where b is a constant vector of the same length as x and the dot indicates a vector product, is univariate Gaussian with

. This result follows by using

Observe how the positive-definiteness of Σ implies that the variance of the dot product must be positive.

An affine transformation of x such as 2x is not the same as the sum of two independent realisations of x.

The equidensity contours of a non-singular multivariate normal distribution are ellipsoids (i.e. linear transformations of hyperspheres) centered at the mean.[16] Hence the multivariate normal distribution is an example of the class of elliptical distributions. The directions of the principal axes of the ellipsoids are given by the eigenvectors of the covariance matrix Σ. The squared relative lengths of the principal axes are given by the corresponding eigenvalues.

If Σ = UΛUT = UΛ1/2(UΛ1/2)T is an eigendecomposition where the columns of U are unit eigenvectors and Λ is a diagonal matrix of the eigenvalues, then we have

Moreover, U can be chosen to be a rotation matrix, as inverting an axis does not have any effect on N(0, Λ), but inverting a column changes the sign of U's determinant. The distribution N(μ, Σ) is in effect N(0, I) scaled by Λ1/2, rotated by U and translated by μ.

Conversely, any choice of μ, full rank matrix U, and positive diagonal entries Λi yields a non-singular multivariate normal distribution. If any Λi is zero and U is square, the resulting covariance matrix UΛUT is singular. Geometrically this means that every contour ellipsoid is infinitely thin and has zero volume in n-dimensional space, as at least one of the principal axes has length of zero.

The derivation of the maximum-likelihood estimator of the covariance matrix of a multivariate normal distribution is perhaps surprisingly subtle and elegant. See estimation of covariance matrices.

In short, the probability density function (pdf) of a multivariate normal is

which is simply the sample covariance matrix. This is a biased estimator whose expectation is

An unbiased sample covariance is

. Suppose then that n observations have been made

and that a conjugate prior has been assigned, where

Mardia's test[20] is based on multivariate extensions of skewness and kurtosis measures. For a sample {x1, ..., xn} of k-dimensional vectors we compute

Under the null hypothesis of multivariate normality, the statistic A will have approximately a chi-squared distribution with Template:Frac2⋅k(k + 1)(k + 2) degrees of freedom, and B will be approximately standard normal N(0,1).

, the parameters of the asymptotic distribution of the kurtosis statistic are modified[21] For small sample tests (

Mardia's tests are affine invariant but not consistent. For example, the multivariate skewness test is not consistent against symmetric non-normal alternatives.[23]

. The test statistic is

A detailed survey of these and other test procedures is available.[25]

Drawing values from the distribution