A spectrogram of a violin waveform, with linear frequency on the vertical axis and time on the horizontal axis. The bright lines show how the spectral components change over time. The intensity coloring is logarithmic (black is −120 dBFS).

Music theorists sometimes use mathematics to understand music, and although music has no axiomatic foundation in modern mathematics, mathematics is "the basis of sound" and sound itself "in its musical aspects... exhibits a remarkable array of number properties", simply because nature itself "is amazingly mathematical".[1] Though ancient Chinese, Egyptians and Mesopotamians are known to have studied the mathematical principles of sound,[2] the Pythagoreans (in particular Philolaus and Archytas[3]) of ancient Greece were the first researchers known to have investigated the expression of musical scales in terms of numerical ratios,[4] particularly the ratios of small integers. Their central doctrine was that "all nature consists of harmony arising out of numbers".[5]

From the time of Plato, harmony was considered a fundamental branch of physics, now known as musical acoustics. Early Indian and Chinese theorists show similar approaches: all sought to show that the mathematical laws of harmonics and rhythms were fundamental not only to our understanding of the world but to human well-being.[6] Confucius, like Pythagoras, regarded the small numbers 1,2,3,4 as the source of all perfection.[7]

The attempt to structure and communicate new ways of composing and hearing music has led to musical applications of set theory, abstract algebra and number theory. Some composers have incorporated the golden ratio and Fibonacci numbers into their work.[8][9]

{{#invoke:main|main}} Without the boundaries of rhythmic structure – a fundamental equal and regular arrangement of pulse repetition, accent, phrase and duration – music would not be possible.[10] In Old English the word "rhyme", derived to "rhythm", became associated and confused with rim – "number"[11] – and modern musical use of terms like meter and measure also reflects the historical importance of music, along with astronomy, in the development of counting, arithmetic and the exact measurement of time and periodicity that is fundamental to physics.

The word "rhyme" was not derived from "rhythm"Template:Contradiction-inline (see Oxford and Collins dictionaries) but from old English "rime". The spelling of "rime" was later affected by the spelling of "rhythm", although the two are totally different.

{{#invoke:main|main}} Musical form is the plan by which a short piece of music is extended. The term "plan" is also used in architecture, to which musical form is often compared. Like the architect, the composer must take into account the function for which the work is intended and the means available, practicing economy and making use of repetition and order.[12] The common types of form known as binary and ternary ("twofold" and "threefold") once again demonstrate the importance of small integral values to the intelligibility and appeal of music. 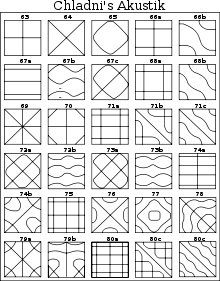 A musical scale is a discrete set of pitches used in making or describing music. The most important scale in the Western tradition is the diatonic scale but many others have been used and proposed in various historical eras and parts of the world. Each pitch corresponds to a particular frequency, expressed in hertz (Hz), sometimes referred to as cycles per second (c.p.s.). A scale has an interval of repetition, normally the octave. The octave of any pitch refers to a frequency exactly twice that of the given pitch. Succeeding superoctaves are pitches found at frequencies four, eight, sixteen times, and so on, of the fundamental frequency. Pitches at frequencies of half, a quarter, an eighth and so on of the fundamental are called suboctaves. There is no case in musical harmony where, if a given pitch be considered accordant, that its octaves are considered otherwise. Therefore any note and its octaves will generally be found similarly named in musical systems (e.g. all will be called doh or A or Sa, as the case may be). When expressed as a frequency bandwidth an octave A2–A3 spans from 110 Hz to 220 Hz (span=110 Hz). The next octave will span from 220 Hz to 440 Hz (span=220 Hz). The third octave spans from 440 Hz to 880 Hz (span=440 Hz) and so on. Each successive octave spans twice the frequency range of the previous octave.

Because we are often interested in the relations or ratios between the pitches (known as intervals) rather than the precise pitches themselves in describing a scale, it is usual to refer to all the scale pitches in terms of their ratio from a particular pitch, which is given the value of one (often written 1/1), generally a note which functions as the tonic of the scale. For interval size comparison cents are often used.

The exponential nature of octaves when measured on a linear frequency scale.

This diagram presents octaves as they appear in the sense of musical intervals, equally spaced.

{{#invoke:main|main}} 5-limit tuning, the most common form of just intonation, is a system of tuning using tones that are regular number harmonics of a single fundamental frequency. This was one of the scales Johannes Kepler presented in his Harmonices Mundi (1619) in connection with planetary motion. The same scale was given in transposed form by Scottish mathematician and musical theorist, Alexander Malcolm, in 1721 in his 'Treatise of Musick: Speculative, Practical and Historical',[13] and by theorist Jose Wuerschmidt in the 20th century. A form of it is used in the music of northern India. American composer Terry Riley also made use of the inverted form of it in his "Harp of New Albion". Just intonation gives superior results when there is little or no chord progression: voices and other instruments gravitate to just intonation whenever possible. However, as it gives two different whole tone intervals (9:8 and 10:9) because a fixed tuned instrument, such as a piano, cannot change key.[14] To calculate the frequency of a note in a scale given in terms of ratios, the frequency ratio is multiplied by the tonic frequency. For instance, with a tonic of A4 (A natural above middle C), the frequency is 440 Hz, and a justly tuned fifth above it (E5) is simply 440×(3:2) = 660 Hz.

The first 16 harmonics, their names and frequencies, showing the exponential nature of the octave and the simple fractional nature of non-octave harmonics.

Pythagorean tuning is tuning based only on the perfect consonances, the (perfect) octave, perfect fifth, and perfect fourth. Thus the major third is considered not a third but a ditone, literally "two tones", and is (9:8)2 = 81:64, rather than the independent and harmonic just 5:4 = 80:64 directly below. A whole tone is a secondary interval, being derived from two perfect fifths, (3:2)2 = 9:8.

The just major third, 5:4 and minor third, 6:5, are a syntonic comma, 81:80, apart from their Pythagorean equivalents 81:64 and 32:27 respectively. According to Carl Dahlhaus (1990, p. 187), "the dependent third conforms to the Pythagorean, the independent third to the harmonic tuning of intervals."

Western common practice music usually cannot be played in just intonation but requires a systematically tempered scale. The tempering can involve either the irregularities of well temperament or be constructed as a regular temperament, either some form of equal temperament or some other regular meantone, but in all cases will involve the fundamental features of meantone temperament. For example, the root of chord ii, if tuned to a fifth above the dominant, would be a major whole tone (9:8) above the tonic. If tuned a just minor third (6:5) below a just subdominant degree of 4:3, however, the interval from the tonic would equal a minor whole tone (10:9). Meantone temperament reduces the difference between 9:8 and 10:9. Their ratio, (9:8)/(10:9) = 81:80, is treated as a unison. The interval 81:80, called the syntonic comma or comma of Didymus, is the key comma of meantone temperament.

In equal temperament, the octave is divided into twelve equal parts, each semitone (half-step) is an interval of the twelfth root of two so that twelve of these equal half steps add up to exactly an octave. With fretted instruments it is very useful to use equal temperament so that the frets align evenly across the strings. In the European music tradition, equal temperament was used for lute and guitar music far earlier than for other instruments, such as musical keyboards. Because of this historical force, twelve-tone equal temperament is now the dominant intonation system in the Western, and much of the non-Western, world.

Equally tempered scales have been used and instruments built using various other numbers of equal intervals. The 19 equal temperament, first proposed and used by Guillaume Costeley in the 16th century, uses 19 equally spaced tones, offering better major thirds and far better minor thirds than normal 12-semitone equal temperament at the cost of a flatter fifth. The overall effect is one of greater consonance. 24 equal temperament, with 24 equally spaced tones, is widespread in the pedagogy and notation of Arabic music. However, in theory and practice, the intonation of Arabic music conforms to rational ratios, as opposed to the irrational ratios of equally tempered systems. While any analog to the equally tempered quarter tone is entirely absent from Arabic intonation systems, analogs to a three-quarter tone, or neutral second, frequently occur. These neutral seconds, however, vary slightly in their ratios dependent on maqam, as well as geography. Indeed, Arabic music historian Habib Hassan Touma has written that "the breadth of deviation of this musical step is a crucial ingredient in the peculiar flavor of Arabian music. To temper the scale by dividing the octave into twenty-four quarter-tones of equal size would be to surrender one of the most characteristic elements of this musical culture."[15]

Below are Ogg Vorbis files demonstrating the difference between just intonation and equal temperament. You may need to play the samples several times before you can pick the difference.

{{#invoke:main|main}} Musical set theory uses the language of mathematical set theory in an elementary way to organize musical objects and describe their relationships. To analyze the structure of a piece of (typically atonal) music using musical set theory, one usually starts with a set of tones, which could form motives or chords. By applying simple operations such as transposition and inversion, one can discover deep structures in the music. Operations such as transposition and inversion are called isometries because they preserve the intervals between tones in a set.

{{#invoke:main|main}} Expanding on the methods of musical set theory, some theorists have used abstract algebra to analyze music. For example, the pitch classes in an equally tempered octave form an abelian group with 12 elements. It is possible to describe just intonation in terms of a free abelian group.,[16][17]

, with the action being defined via transposition of notes. So the chromatic scale can be thought of as a torsor for the group

Real and complex analysis have also been made use of, for instance by applying the theory of the Riemann zeta function to the study of equal divisions of the octave.[1]