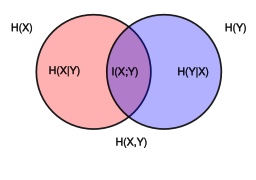 Formally, the mutual information of two discrete random variables X and Y can be defined as:

where p(x,y) is the joint probability distribution function of X and Y, and

are the marginal probability distribution functions of X and Y respectively.

In the case of continuous random variables, the summation is replaced by a definite double integral:

where p(x,y) is now the joint probability density function of X and Y, and

are the marginal probability density functions of X and Y respectively.

If the log base 2 is used, the units of mutual information are the bit.

Relation to other quantities

Mutual information can be equivalently expressed as

are the marginal entropies, H(X|Y) and H(Y|X) are the conditional entropies, and H(X,Y) is the joint entropy of X and Y. Note the analogy to the union, difference, and intersection of two sets, as illustrated in the Venn diagram.

Using Jensen's inequality on the definition of mutual information we can show that I(X;Y) is non-negative, consequently,

The proofs of the other identities above are similar.

Note that in the discrete case H(X|X) = 0 and therefore H(X) = I(X;X). Thus I(X;X) ≥ I(X;Y), and one can formulate the basic principle that a variable contains at least as much information about itself as any other variable can provide.

Note that here, the Kullback-Leibler divergence involves integration with respect to the random variable X only, and the expression

is now a random variable in Y. Thus mutual information can also be understood as the expectation of the Kullback–Leibler divergence of the univariate distribution p(x) of X from the conditional distribution p(x|y) of X given Y: the more different the distributions p(x|y) and p(x) are on average, the greater the information gain.

Several variations on mutual information have been proposed to suit various needs. Among these are normalized variants and generalizations to more than two variables.

Many applications require a metric, that is, a distance measure between pairs of points. The quantity

satisfies the properties of a metric (triangle inequality, non-negativity, indiscernability and symmetry). This distance metric is also known as the Variation of information.

are discrete random variables then all the entropy terms are non-negative, so

and one can define a normalized distance

The metric D is a universal metric, in that if any other distance measure places X and Y close-by, then the D will also judge them close.[1]{{ safesubst:#invoke:Unsubst||$N=Dubious |date=__DATE__ |$B= {{#invoke:Category handler|main}}[dubious – discuss] }}

which is effectively the Jaccard distance between X and Y.

is also a metric.

{{#invoke:main|main}} Sometimes it is useful to express the mutual information of two random variables conditioned on a third.

which can be simplified as

Conditioning on a third random variable may either increase or decrease the mutual information, but it is always true that

for discrete, jointly distributed random variables X, Y, Z. This result has been used as a basic building block for proving other inequalities in information theory.

{{#invoke:main|main}} Several generalizations of mutual information to more than two random variables have been proposed, such as total correlation and interaction information. If Shannon entropy is viewed as a signed measure in the context of information diagrams, as explained in the article Information theory and measure theory, then the only definition of multivariate mutual information that makes sense{{ safesubst:#invoke:Unsubst||date=__DATE__ |$B= {{#invoke:Category handler|main}}{{#invoke:Category handler|main}}[citation needed] }} is as follows:

where (as above) we define

(This definition of multivariate mutual information is identical to that of interaction information except for a change in sign when the number of random variables is odd.)

are two sets of variables, then the mutual information between them is:

Applying information diagrams blindly to derive the above definition{{ safesubst:#invoke:Unsubst||date=__DATE__ |$B= {{#invoke:Category handler|main}}{{#invoke:Category handler|main}}[citation needed] }} has been criticised, and indeed it has found rather limited practical application, since it is difficult to visualize or grasp the significance of this quantity for a large number of random variables. It can be zero, positive, or negative for any

One high-dimensional generalization scheme which maximizes the mutual information between the joint distribution and other target variables is found to be useful in feature selection.[2]

Mutual information is also used in the area of signal processing as a measure of similarity between two signals. For example, FMI metric[3] is an image fusion performance measure that makes use of mutual information in order to measure the amount of information that the fused image contains about the source images. The Matlab code for this metric can be found at.[4]

Normalized variants of the mutual information are provided by the coefficients of constraint,[5] uncertainty coefficient [6] or proficiency:[7]

when one variable becomes completely redundant with the knowledge of the other. See also Redundancy (information theory). Another symmetrical measure is the symmetric uncertainty (Witten & Frank 2005), given by

which represents a weighted average of the two uncertainty coefficients.[6]

Finally there's a normalization [8] which derives from first thinking of mutual information as an analogue to covariance (thus Shannon entropy is analogous to variance). Then the normalized mutual information is calculated akin to the Pearson correlation coefficient,

In the traditional formulation of the mutual information,

each event or object specified by

is weighted by the corresponding probability

For example, the deterministic mapping

may be viewed as stronger than the deterministic mapping

, although these relationships would yield the same mutual information. This is because the mutual information is not sensitive at all to any inherent ordering in the variable values (Cronbach 1954, Coombs & Dawes 1970, Lockhead 1970), and is therefore not sensitive at all to the form of the relational mapping between the associated variables. If it is desired that the former relation — showing agreement on all variable values — be judged stronger than the later relation, then it is possible to use the following weighted mutual information (Guiasu 1977)

which places a weight

on the probability of each variable value co-occurrence,

. This allows that certain probabilities may carry more or less significance than others, thereby allowing the quantification of relevant holistic or prägnanz factors. In the above example, using larger relative weights for

would have the effect of assessing greater informativeness for the relation

than for the relation

A probability distribution can be viewed as a partition of a set. One may then ask: if a set were partitioned randomly, what would the distribution of probabilities be? What would the expectation value of the mutual information be? The adjusted mutual information or AMI subtracts the expectation value of the MI, so that the AMI is zero when two different distributions are random, and one when two distributions are identical. The AMI is defined in analogy to the adjusted Rand index of two different partitions of a set.

Using the ideas of Kolmogorov complexity, one can consider the mutual information of two sequences independent of any probability distribution:

When X and Y are limited to be in a discrete number of states, observation data is summarized in a contingency table, with row variable X (or i) and column variable Y (or j). Mutual information is one of the measures of association or correlation between the row and column variables. Other measures of association include Pearson's chi-squared test statistics, G-test statistics, etc. In fact, mutual information is equal to G-test statistics divided by 2N where N is the sample size.

In the special case where the number of states for both row and column variables is 2 (i,j=1,2), the degrees of freedom of the Pearson's chi-squared test is 1. Out of the four terms in the summation:

only one is independent. It is the reason that mutual information function has an exact relationship with the correlation function

In many applications, one wants to maximize mutual information (thus increasing dependencies), which is often equivalent to minimizing conditional entropy. Examples include: