{{ safesubst:#invoke:Unsubst||$N=Confusing |date=__DATE__ |$B= {{#invoke:Message box|ambox}} }}In computational complexity theory, a decision problem is NP-complete when it is both in NP and NP-hard. The set of NP-complete problems is often denoted by NP-C or NPC. The abbreviation NP refers to "nondeterministic polynomial time".

Although any given solution to an NP-complete problem can be verified quickly (in polynomial time), there is no known efficient way to locate a solution in the first place; indeed, the most notable characteristic of NP-complete problems is that no fast solution to them is known. That is, the time required to solve the problem using any currently known algorithm increases very quickly as the size of the problem grows. As a consequence, determining whether or not it is possible to solve these problems quickly, called the P versus NP problem, is one of the principal unsolved problems in computer science today.

can be verified in polynomial time.

Note that a problem satisfying condition 2 is said to be NP-hard, whether or not it satisfies condition 1.[2]

A consequence of this definition is that if we had a polynomial time algorithm (on a UTM, or any other Turing-equivalent abstract machine) for

, we could solve all problems in NP in polynomial time.

The concept of NP-completeness was introduced in 1971 by Stephen Cook in a paper entitled The complexity of theorem-proving procedures on pages 151–158 of the Proceedings of the 3rd Annual ACM Symposium on Theory of Computing, though the term NP-complete did not appear anywhere in his paper. At that computer science conference, there was a fierce debate among the computer scientists about whether NP-complete problems could be solved in polynomial time on a deterministic Turing machine. John Hopcroft brought everyone at the conference to a consensus that the question of whether NP-complete problems are solvable in polynomial time should be put off to be solved at some later date, since nobody had any formal proofs for their claims one way or the other. This is known as the question of whether P=NP.

Nobody has yet been able to determine conclusively whether NP-complete problems are in fact solvable in polynomial time, making this one of the great unsolved problems of mathematics. The Clay Mathematics Institute is offering a US $1 million reward to anyone who has a formal proof that P=NP or that P≠NP.

In Cook's theorem, Cook proved that the Boolean satisfiability problem is NP-complete (a simpler, but still highly technical proof of this is available). In 1972, Richard Karp proved that several other problems were also NP-complete (see Karp's 21 NP-complete problems); thus there is a class of NP-complete problems (besides the Boolean satisfiability problem). Since Cook's original results, thousands of other problems have been shown to be NP-complete by reductions from other problems previously shown to be NP-complete; many of these problems are collected in Garey and Johnson's 1979 book Computers and Intractability: A Guide to the Theory of NP-Completeness.[3] For more details refer to Introduction to the Design and Analysis of Algorithms by Anany Levitin. 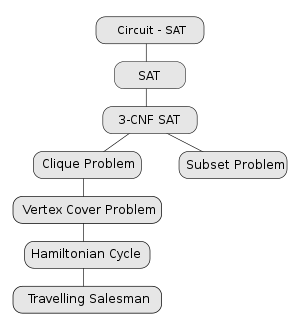 Some NP-complete problems, indicating the reductions typically used to prove their NP-completeness

An interesting example is the graph isomorphism problem, the graph theory problem of determining whether a graph isomorphism exists between two graphs. Two graphs are isomorphic if one can be transformed into the other simply by renaming vertices. Consider these two problems:

To the right is a diagram of some of the problems and the reductions typically used to prove their NP-completeness. In this diagram, an arrow from one problem to another indicates the direction of the reduction. Note that this diagram is misleading as a description of the mathematical relationship between these problems, as there exists a polynomial-time reduction between any two NP-complete problems; but it indicates where demonstrating this polynomial-time reduction has been easiest.

At present, all known algorithms for NP-complete problems require time that is superpolynomial in the input size, and it is unknown whether there are any faster algorithms.

The following techniques can be applied to solve computational problems in general, and they often give rise to substantially faster algorithms:

One example of a heuristic algorithm is a suboptimal

greedy coloring algorithm used for graph coloring during the register allocation phase of some compilers, a technique called graph-coloring global register allocation. Each vertex is a variable, edges are drawn between variables which are being used at the same time, and colors indicate the register assigned to each variable. Because most RISC machines have a fairly large number of general-purpose registers, even a heuristic approach is effective for this application.

Completeness under different types of reduction

In the definition of NP-complete given above, the term reduction was used in the technical meaning of a polynomial-time many-one reduction.

Another type of reduction is polynomial-time Turing reduction. A problem

is polynomial-time Turing-reducible to a problem

if, given a subroutine that solves

in polynomial time, one could write a program that calls this subroutine and solves

If one defines the analogue to NP-complete with Turing reductions instead of many-one reductions, the resulting set of problems won't be smaller than NP-complete; it is an open question whether it will be any larger.

According to Donald Knuth, the name "NP-complete" was popularized by Alfred Aho, John Hopcroft and Jeffrey Ullman in their celebrated textbook "The Design and Analysis of Computer Algorithms". He reports that they introduced the change in the galley proofs for the book (from "polynomially-complete"), in accordance with the results of a poll he had conducted of the Theoretical Computer Science community.[6] Other suggestions made in the poll[7] included "Herculean", "formidable", Steiglitz's "hard-boiled" in honor of Cook, and Shen Lin's acronym "PET", which stood for "probably exponential time", but depending on which way the P versus NP problem went, could stand for "provably exponential time" or "previously exponential time".[8]

The following misconceptions are frequent.[9]

|CitationClass=book }} This book is a classic, developing the theory, then cataloguing many NP-Complete problems.