The Narayana numbers can be expressed in terms of binomial coefficients:

An example of a counting problem whose solution can be given in terms of the Narayana numbers N(n, k), is the number of expressions containing n pairs of parentheses which are correctly matched and which contain k distinct nestings. For instance, N(4, 2) = 6 as with four pairs of parentheses six sequences can be created which each contain two times the sub-pattern '()':

From this example it should be obvious that N(n, 1) = 1, since the only way to get a single sub-pattern '()' is to have all the opening parentheses in the first n positions, followed by all the closing parentheses. Also N(n, n) = 1, as distinct nestings can be achieved only by the repetitive pattern ()()() ... (). More generally, it can be shown that the Narayana triangle is symmetric: N(n, k) = N(n, n − k + 1).

The first eight rows of the Narayana triangle read:

The sum of the rows in this triangle equal the Catalan numbers:

To illustrate this relationship, the Narayana numbers also count the number of paths from (0, 0) to (2n, 0), with steps only northeast and southeast, not straying below the x-axis, with k peaks.

The sum of N(4, k) is 1 + 6 + 6 + 1, or 14, which is the same as Catalan number C4. This sum coincides with the interpretation of Catalan numbers as the number of monotonic paths along the edges of an n × n grid that do not pass above the diagonal. 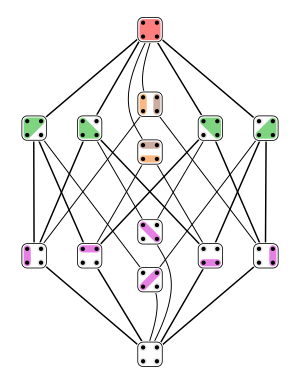 In the study of partitions, we see that in a set containing n elements, we may partition that set in

is the nth Bell number. Furthermore, the number of ways to partition a set into exactly k blocks we use the Stirling numbers

. Both of these concepts are a bit off-topic, but a necessary foundation for understanding the use of the Narayana numbers. In both of the above two notions crossing partitions are accounted for.

. To count the non-crossing partitions in which the set is partitioned in exactly k blocks, we use the Narayana number