Template:Network Science Network topology is the arrangement of the various elements (links, nodes, etc.) of a computer network.[1][2] Essentially, it is the topological[3] structure of a network and may be depicted physically or logically. Physical topology is the placement of the various components of a network, including device location and cable installation, while logical topology illustrates how data flows within a network, regardless of its physical design. Distances between nodes, physical interconnections, transmission rates, or signal types may differ between two networks, yet their topologies may be identical.

The cabling layout used to link devices is the physical topology of the network. This refers to the layout of cabling, the locations of nodes, and the interconnections between the nodes and the cabling.[1] The physical topology of a network is determined by the capabilities of the network access devices and media, the level of control or fault tolerance desired, and the cost associated with cabling or telecommunications circuits.

The logical topology in contrast, is the way that the signals act on the network media, or the way that the data passes through the network from one device to the next without regard to the physical interconnection of the devices. A network's logical topology is not necessarily the same as its physical topology. For example, the original twisted pair Ethernet using repeater hubs was a logical bus topology with a physical star topology layout. Token Ring is a logical ring topology, but is wired a physical star from the Media Access Unit.

The logical classification of network topologies generally follows the same classifications as those in the physical classifications of network topologies but describes the path that the data takes between nodes being used as opposed to the actual physical connections between nodes. The logical topologies are generally determined by network protocols as opposed to being determined by the physical layout of cables, wires, and network devices or by the flow of the electrical signals, although in many cases the paths that the electrical signals take between nodes may closely match the logical flow of data, hence the convention of using the terms logical topology and signal topology interchangeably.

Easiest to understand, of the variations of point-to-point topology, is a point-to-point communications channel that appears, to the user, to be permanently associated with the two endpoints. A children's tin can telephone is one example of a physical dedicated channel.

Within many switched telecommunications systems, it is possible to establish a permanent circuit. One example might be a telephone in the lobby of a public building, which is programmed to ring only the number of a telephone dispatcher. "Nailing down" a switched connection saves the cost of running a physical circuit between the two points. The resources in such a connection can be released when no longer needed, for example, a television circuit from a parade route back to the studio.

Using circuit-switching or packet-switching technologies, a point-to-point circuit can be set up dynamically and dropped when no longer needed. This is the basic mode of conventional telephony.

In local area networks where bus topology is used, each node is connected to a single cable. Each computer or server is connected to the single bus cable. A signal from the source travels in both directions to all machines connected on the bus cable until it finds the intended recipient. If the machine address does not match the intended address for the data, the machine ignores the data. Alternatively, if the data matches the machine address, the data is accepted. Because the bus topology consists of only one wire, it is rather inexpensive to implement when compared to other topologies. However, the low cost of implementing the technology is offset by the high cost of managing the network. Additionally, because only one cable is utilized, it can be the single point of failure.

Note: When the electrical signal reaches the end of the bus, the signal "echoes" back down the line, causing unwanted interference. As a solution, the two endpoints of the bus are normally terminated with a device called a terminator that prevents this echo. 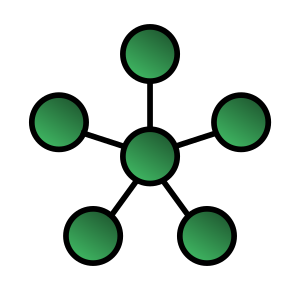 In local area networks with a star topology, each network host is connected to a central hub with a point-to-point connection. In Star topology every node (computer workstation or any other peripheral) is connected to a central node called hub or switch. The switch is the server and the peripherals are the clients. The network does not necessarily have to resemble a star to be classified as a star network, but all of the nodes on the network must be connected to one central device. All traffic that traverses the network passes through the central hub. The hub acts as a signal repeater. The star topology is considered the easiest topology to design and implement. An advantage of the star topology is the simplicity of adding additional nodes. The primary disadvantage of the star topology is that the hub represents a single point of failure.

If the repeaters in a network that is based upon the physical extended star topology are replaced with hubs or switches, then a hybrid network topology is created that is referred to as a physical hierarchical star topology, although some texts make no distinction between the two topologies.

A type of network topology that is composed of individual networks that are based upon the physical star topology connected in a linear fashion – i.e., 'daisy-chained' – with no central or top level connection point (e.g., two or more 'stacked' hubs, along with their associated star connected nodes or 'spokes').

A network topology that is set up in a circular fashion in which data travels around the ring in one direction and each device on the ring acts as a repeater to keep the signal strong as it travels. Each device incorporates a receiver for the incoming signal and a transmitter to send the data on to the next device in the ring. The network is dependent on the ability of the signal to travel around the ring. When a device sends data, it must travel through each device on the ring until it reaches its destination. Every node is a critical link.[4] In a ring topology, there is no server computer present; all nodes work as a server and repeat the signal. The disadvantage of this topology is that if one node stops working, the entire network is affected or stops working.

{{#invoke:main|main}} The value of fully meshed networks is proportional to the exponent of the number of subscribers, assuming that communicating groups of any two endpoints, up to and including all the endpoints, is approximated by Reed's Law.

and so it is extremely impractical for large networks. A two-node network is technically a fully connected network.

For example, if the connection between two groups of networks is broken down due to breaking of the connection on the central linear core, then those two groups cannot communicate, much like nodes of a bus topology. However, the star topology nodes will effectively communicate with each other.

An example of this network could be cable TV technology. Other examples are in dynamic tree based wireless networks for military, mining and otherwise mobile applications.

An example of this network could be cable TV technology. Other examples are in dynamic tree based wireless networks for military, mining and otherwise mobile applications.[6] The Naval Postgraduate School, Monterey CA, demonstrated such tree based wireless networks for border security.[7] In a pilot system, aerial cameras kept aloft by balloons relayed real time high resolution video to ground personnel via a dynamic self healing tree based network.

While grid and torus networks have found popularity in high-performance computing applications, some systems have used genetic algorithms to design custom networks that have the fewest possible hops in between different nodes. Some of the resulting layouts are nearly incomprehensible, although they function quite well.{{ safesubst:#invoke:Unsubst||date=__DATE__ |$B= {{#invoke:Category handler|main}}{{#invoke:Category handler|main}}[citation needed] }}

A Snowflake topology is really a "Star of Stars" network, so it exhibits characteristics of a hybrid network topology but is not composed of two different basic network topologies being connected.

Except for star-based networks, the easiest way to add more computers into a network is by daisy-chaining, or connecting each computer in series to the next. If a message is intended for a computer partway down the line, each system bounces it along in sequence until it reaches the destination. A daisy-chained network can take two basic forms: linear and ring.

A tree topology (a.k.a. hierarchical topology) can be viewed as a collection of star networks arranged in a hierarchy. This tree has individual peripheral nodes (e.g. leaves) which are required to transmit to and receive from one other node only and are not required to act as repeaters or regenerators. Unlike the star network, the functionality of the central node may be distributed.

To alleviate the amount of network traffic that comes from broadcasting all signals to all nodes, more advanced central nodes were developed that are able to keep track of the identities of the nodes that are connected to the network. These network switches will "learn" the layout of the network by "listening" on each port during normal data transmission, examining the data packets and recording the address/identifier of each connected node and which port it is connected to in a lookup table held in memory. This lookup table then allows future transmissions to be forwarded to the intended destination only.

In a mesh topology (i.e., a partially connected mesh topology), there are at least two nodes with two or more paths between them to provide redundant paths to be used in case the link providing one of the paths fails. This decentralization is often used to compensate for the single-point-failure disadvantage that is present when using a single device as a central node (e.g., in star and tree networks). A special kind of mesh, limiting the number of hops between two nodes, is a hypercube. The number of arbitrary forks in mesh networks makes them more difficult to design and implement, but their decentralized nature makes them very useful. In 2012 the IEEE published the Shortest path bridging protocol to ease configuration tasks and allows all paths to be active which increases bandwidth and redundancy between all devices.[8][9][10][11][12]

This is similar in some ways to a grid network, where a linear or ring topology is used to connect systems in multiple directions. A multidimensional ring has a toroidal topology, for instance.

A fully connected network, complete topology, or full mesh topology is a network topology in which there is a direct link between all pairs of nodes. In a fully connected network with n nodes, there are n(n-1)/2 direct links. Networks designed with this topology are usually very expensive to set up, but provide a high degree of reliability due to the multiple paths for data that are provided by the large number of redundant links between nodes. This topology is mostly seen in military applications.