In mathematics, smooth functions (also called infinitely differentiable functions) and analytic functions are two very important types of functions. One can easily prove that any analytic function of a real argument is smooth. The converse is not true, with this article constructing a counterexample.

One of the most important applications of smooth functions with compact support is the construction of so-called mollifiers, which are important in theories of generalized functions, like e.g. Laurent Schwartz's theory of distributions.

The existence of smooth but non-analytic functions represents one of the main differences between differential geometry and analytic geometry. In terms of sheaf theory, this difference can be stated as follows: the sheaf of differentiable functions on a differentiable manifold is fine, in contrast with the analytic case.

The functions below are generally used to build up partitions of unity on differentiable manifolds.

Definition of the function

The non-analytic smooth function considered in the article.

defined for every real number x.

The function is smooth

The function f has continuous derivatives of all orders in all points x of the real line, given by

The proof, by induction, is based on the fact that for any natural number m including zero,

which implies that all f (n) are continuous and differentiable at x = 0, because

By the power series representation of the exponential function, we have for every natural number m (including zero)

because all the positive terms for n ≠ m + 1 are added. Therefore, using the functional equation of the exponential function,

The induction step from n to n + 1 is similar. For x > 0 we get for the derivative

The function is not analytic

As seen earlier, the function f is smooth, and all its derivatives at the origin are 0. Therefore, the Taylor series of f at the origin converges everywhere to the zero function,

and so the Taylor series does not equal f(x) for x > 0. Consequently, f is not analytic at the origin. This pathology cannot occur with differentiable functions of a complex variable rather than of a real variable. Indeed, all holomorphic functions are analytic, so that the failure of f to be analytic in spite of its being infinitely differentiable is an indication of one of the most dramatic differences between real-variable and complex-variable analysis.

Note that although the function f has derivatives of all orders over the real line, the analytic continuation of f from the positive half-line x > 0 to the complex plane, that is, the function

has an essential singularity at the origin, and hence is not even continuous, much less analytic. By the great Picard theorem, it attains every complex value (with the exception of zero) infinitely often in every neighbourhood of the origin.

A smooth function which is nowhere real analytic

A more pathological example, of an infinitely differentiable function which is not analytic at any point can be constructed by means of a Fourier series as follows. Let A:={2n : n ∈ N } be the set of all powers of 2, and define for all x ∈ R

converge for all n ∈ N, this function is easily seen to be of class C∞, by a standard inductive application of the Weierstrass M-test, and of the theorem of limit under the sign of derivative. Moreover, for any dyadic rational multiple of π, that is x:=π p/q with p ∈ N and q ∈ A, and for all order of derivation n ∈ A, n ≥ 4 and n > q we have

so that the radius of convergence of the Taylor series of F at x is 0 by the Cauchy-Hadamard formula . Since the set of analyticity of a function is an open set, and since dyadic rationals are dense, we conclude that F is nowhere analytic in R. 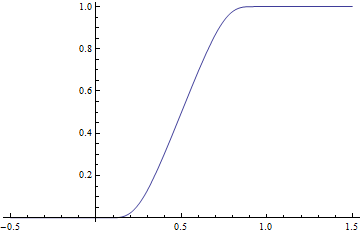 The smooth transition g from 0 to 1 defined here.

has a strictly positive denominator everywhere on the real line, hence g is also smooth. Furthermore, g(x) = 0 for x ≤ 0 and g(x) = 1 for x ≥ 1, hence it provides a smooth transition from the level 0 to the level 1 in the unit interval [0,1]. To have the smooth transition in the real interval [a,b] with a < b, consider the function

equals 1 on the closed interval [b,c] and vanishes outside the open interval (a,d).

{{#invoke:main|main}} For every sequence α0, α1, α2, . . . of real or complex numbers, the following construction shows the existence of a smooth function F on the real line which has these numbers as derivatives at the origin.[1] In particular, every sequence of numbers can appear as the coefficients of the Taylor series of a smooth function. This result is known as Borel's lemma, after Émile Borel.

With the smooth transition function g as above, define

This function h is also smooth; it equals 1 on the closed interval [−1,1] and vanishes outside the open interval (−2,2). Using h, define for every natural number n (including zero) the smooth function

which agrees with the monomial xn on [−1,1] and vanishes outside the interval (−2,2). Hence, the k-th derivative of ψn at the origin satisfies

and the boundedness theorem implies that ψn and every derivative of ψn is bounded. Therefore, the constants

involving the supremum norm of ψn and its first n derivatives, are well-defined real numbers. Define the scaled functions

By repeated application of the chain rule,

and, using the previous result for the k-th derivative of ψn at zero,

It remains to show that the function

is well defined and can be differentiated term-by-term infinitely often.[2] To this end, observe that for every k

where the remaining infinite series converges by the ratio test.

The function Ψ1(x) in one dimension.

with Euclidean norm ||x|| defines a smooth function on n-dimensional Euclidean space with support in the ball of radius r, but