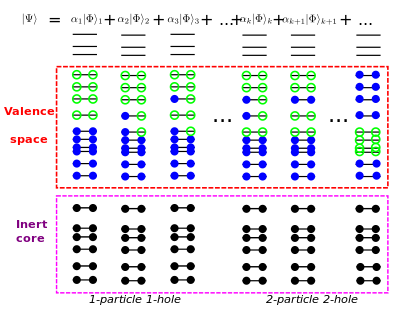 Partly filled valence orbitals for both neutrons and protons appear at energies over the filled inert core orbitals, in the shell model of the atomic nucleus

In nuclear physics and nuclear chemistry, the nuclear shell model is a model of the atomic nucleus which uses the Pauli exclusion principle to describe the structure of the nucleus in terms of energy levels.[1] The first shell model was proposed by Dmitry Ivanenko (together with E. Gapon) in 1932. The model was developed in 1949 following independent work by several physicists, most notably Eugene Paul Wigner, Maria Goeppert-Mayer and J. Hans D. Jensen, who shared the 1963 Nobel Prize in Physics for their contributions.

The shell model is partly analogous to the atomic shell model which describes the arrangement of electrons in an atom, in that a filled shell results in greater stability. When adding nucleons (protons or neutrons) to a nucleus, there are certain points where the binding energy of the next nucleon is significantly less than the last one. This observation, that there are certain magic numbers of nucleons: 2, 8, 20, 28, 50, 82, 126 which are more tightly bound than the next higher number, is the origin of the shell model.

The shells for protons and for neutrons are independent of each other. Therefore, one can have "magic nuclei" where one nucleon type or the other is at a magic number, and "doubly magic nuclei", where both are. Due to some variations in orbital filling, the upper magic numbers are 126 and, speculatively, 184 for neutrons but only 114 for protons, playing a role in the search for the so-called island of stability. Some semimagic numbers have been found, notably Z=40 giving nuclear shell filling for the various elements; 16 may also be a magic number.[2]

In order to get these numbers, the nuclear shell model starts from an average potential with a shape something between the square well and the harmonic oscillator. To this potential a spin orbit term is added. Even so, the total perturbation does not coincide with experiment, and an empirical spin orbit coupling, named the Nilsson Term, must be added with at least two or three different values of its coupling constant, depending on the nuclei being studied.

Nevertheless, the magic numbers of nucleons, as well as other properties, can be arrived at by approximating the model with a three-dimensional harmonic oscillator plus a spin-orbit interaction. A more realistic but also complicated potential is known as Woods Saxon potential.

Igal Talmi developed a method to obtain the information from experimental data and use it to calculate and predict energies which have not been measured. This method has been successfully used by many nuclear physicists and has led to deeper understanding of nuclear structure. The theory which gives a good description of these properties was developed. This description turned out to furnish the shell model basis of the elegant and successful Interacting boson model.

Consider a three-dimensional harmonic oscillator. This would give, for example, in the first two levels ("l" is angular momentum)

We can imagine ourselves building a nucleus by adding protons and neutrons. These will always fill the lowest available level. Thus the first two protons fill level zero, the next six protons fill level one, and so on. As with electrons in the periodic table, protons in the outermost shell will be relatively loosely bound to the nucleus if there are only few protons in that shell, because they are farthest from the center of the nucleus. Therefore nuclei which have a full outer proton shell will have a higher binding energy than other nuclei with a similar total number of protons. All this is true for neutrons as well.

This means that the magic numbers are expected to be those in which all occupied shells are full. We see that for the first two numbers we get 2 (level 0 full) and 8 (levels 0 and 1 full), in accord with experiment. However the full set of magic numbers does not turn out correctly. These can be computed as follows:

. Due to the spin, the degeneracy is doubled and is

.
Thus the magic numbers would be

In particular, the first six shells are:

where for every l there are 2l+1 different values of ml and 2 values of ms, giving a total of 4l+2 states for every specific level.

Including a spin-orbit interaction

where for every j there are Template:Gaps different states from different values of mj.

Due to the spin-orbit interaction the energies of states of the same level but with different j will no longer be identical. This is because in the original quantum numbers, when

, the interaction energy is positive; and in this case j = l + s = l + Template:Frac. When

(i.e. aligned oppositely), the interaction energy is negative, and in this case Template:Gaps. Furthermore, the strength of the interaction is roughly proportional to l.

For example, consider the states at level 4:

grows infinitely as the distance from the center r goes to infinity. A more realistic potential, such as Woods Saxon potential, would approach a constant at this limit. One main consequence is that the average radius of nucleons' orbits would be larger in a realistic potential; This leads to a reduced term

in the Laplace operator of the Hamiltonian. Another main difference is that orbits with high average radii, such as those with high n or high l, will have a lower energy than in a harmonic oscillator potential. Both effects lead to a reduction in the energy levels of high l orbits.

Low-lying energy levels in a single-particle shell model with an oscillator potential (with a small negative l2 term) without spin-orbit (left) and with spin-orbit (right) interaction. The number to the right of a level indicates its degeneracy, (2j+1). The boxed integers indicate the magic numbers.

Together with the spin-orbit interaction, and for appropriate magnitudes of both effects, one is led to the following qualitative picture: At all levels, the highest j states have their energies shifted downwards, especially for high n (where the highest j is high). This is both due to the negative spin-orbit interaction energy and to the reduction in energy resulting from deforming the potential to a more realistic one. The second-to-highest j states, on the contrary, have their energy shifted up by the first effect and down by the second effect, leading to a small overall shift. The shifts in the energy of the highest j states can thus bring the energy of states of one level to be closer to the energy of states of a lower level. The "shells" of the shell model are then no longer identical to the levels denoted by n, and the magic numbers are changed.

The magic numbers are then

and so on. This gives all the observed magic numbers, and also predicts a new one (the so-called island of stability) at the value of 184 (for protons, the magic number 126 has not been observed yet, and more complicated theoretical considerations predict the magic number to be 114 instead).

Another way to predict magic (and semi-magic) numbers is by laying out the idealized filling order (with spin-orbit splitting but energy levels not overlapping). For consistency s is split into j = 1⁄2 and j = -1⁄2 components with 2 and 0 members respectively. Taking leftmost and rightmost total counts within sequences marked bounded by / here gives the magic and semi-magic numbers.

Other properties of nuclei

This model also predicts or explains with some success other properties of nuclei, in particular spin and parity of nuclei ground states, and to some extent their excited states as well. Take Template:Chem as an example — its nucleus has eight protons filling the three first proton 'shells', eight neutrons filling the three first neutron 'shells', and one extra neutron. All protons in a complete proton shell have total angular momentum zero, since their angular momenta cancel each other; The same is true for neutrons. All protons in the same level (n) have the same parity (either +1 or −1), and since the parity of a pair of particles is the product of their parities, an even number of protons from the same level (n) will have +1 parity. Thus the total angular momentum of the eight protons and the first eight neutrons is zero, and their total parity is +1. This means that the spin (i.e. angular momentum) of the nucleus, as well as its parity, are fully determined by that of the ninth neutron. This one is in the first (i.e. lowest energy) state of the 4th shell, which is a d-shell (l = 2), and since

The rules for the ordering of the nucleus shells are similar to Hund's Rules of the atomic shells, however, unlike its use in atomic physics the completion of a shell is not signified by reaching the next n, as such the shell model cannot accurately predict the order of excited nuclei states, though it is very successful in predicting the ground states. The order of the first few terms are listed as follows: 1s, 1pTemplate:Frac, 1pTemplate:Frac, 1dTemplate:Frac, 2s, 1dTemplate:Frac... For further clarification on the notation refer to the article on the Russell-Saunders term symbol.

In the case of a nucleus with an odd number of protons and an odd number of neutrons, one must consider the total angular momentum and parity of both the last neutron and the last proton. The nucleus parity will be a product of theirs, while the nucleus spin will be one of the possible results of the sum of their angular momenta (with other possible results being excited states of the nucleus).

The electric dipole of a nucleus is always zero, because its ground state has a definite parity, so its matter density (

is the wavefunction) is always invariant under parity. This is usually the situations with the atomic electric dipole as well.

Higher electric and magnetic multipole moments cannot be predicted by this simple version of the shell model, for the reasons similar to those in the case of the deuterium.

Internet streaming broadcasting both on WM and QT at (at 64 kbit/s, 256 kbit/s, 1 Mbit/s ) and DVD ISO (NTSC and PAL) delivery are now available at RIKEN Nishina Center.