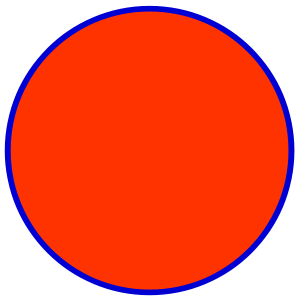 In topology, an open set is an abstract concept generalizing the idea of an open interval in the real line. The simplest example is in metric spaces, where open sets can be defined as those sets which contain an open ball around each of their points (or, equivalently, a set is open if it doesn't contain any of its boundary points); however, an open set, in general, can be very abstract: any collection of sets can be called open, as long as the union of an arbitrary number of open sets is open, the intersection of a finite number of open sets is open, and the space itself is open. These conditions are very loose, and they allow enormous flexibility in the choice of open sets. In the two extremes, every set can be open (called the discrete topology), or no set can be open but the space itself (the indiscrete topology).

In practice, however, open sets are usually chosen to be similar to the open intervals of the real line. The notion of an open set provides a fundamental way to speak of nearness of points in a topological space, without explicitly having a concept of distance defined. Once a choice of open sets is made, the properties of continuity, connectedness, and compactness, which use notions of nearness, can be defined using these open sets.

Each choice of open sets for a space is called a topology. Although open sets and the topologies that they comprise are of central importance in point-set topology, they are also used as an organizational tool in other important branches of mathematics. Examples of topologies include the Zariski topology in algebraic geometry that reflects the algebraic nature of varieties, and the topology on a differential manifold in differential topology where each point within the space is contained in an open set that is homeomorphic to an open ball in a finite-dimensional Euclidean space.

The previous discussion shows, for the case x = 0, that one may approximate x to higher and higher degrees of accuracy by defining ε to be smaller and smaller. In particular, sets of the form (-ε, ε) give us a lot of information about points close to x = 0. Thus, rather than speaking of a concrete Euclidean metric, one may use sets to describe points close to x. This innovative idea has far-reaching consequences; in particular, by defining different collections of sets containing 0 (distinct from the sets (-ε, ε)), one may find different results regarding the distance between 0 and other real numbers. For example, if we were to define R as the only such set for "measuring distance", all points are close to 0 since there is only one possible degree of accuracy one may achieve in approximating 0: being a member of R. Thus, we find that in some sense, every real number is distance 0 away from 0! It may help in this case to think of the measure as being a binary condition, all things in R are equally close to 0, while any item that is not in R is not close to 0.

In general, one refers to the family of sets containing 0, used to approximate 0, as a neighborhood basis; a member of this neighborhood basis is referred to as an open set. In fact, one may generalize these notions to an arbitrary set (X); rather than just the real numbers. In this case, given a point (x) of that set, one may define a collection of sets "around" (that is, containing) x, used to approximate x. Of course, this collection would have to satisfy certain properties (known as axioms) for otherwise we may not have a well-defined method to measure distance. For example, every point in X should approximate x to some degree of accuracy. Thus X should be in this family. Once we begin to define "smaller" sets containing x, we tend to approximate x to a greater degree of accuracy. Bearing this in mind, one may define the remaining axioms that the family of sets about x is required to satisfy.

The concept of open sets can be formalized with various degrees of generality, for example:

A subset U of a metric space (M, d) is called open if, given any point x in U, there exists a real number ε > 0 such that, given any point y in M with d(x, y) < ε, y also belongs to U. Equivalently, U is open if every point in U has a neighbourhood contained in U.

In general topological spaces, the open sets can be almost anything, with different choices giving different spaces.

be a set and

be a family of sets. We say that

is a topology on

We call the sets in

Open sets have a fundamental importance in topology. The concept is required to define and make sense of topological space and other topological structures that deal with the notions of closeness and convergence for spaces such as metric spaces and uniform spaces.

Every subset A of a topological space X contains a (possibly empty) open set; the largest such open set is called the interior of A. It can be constructed by taking the union of all the open sets contained in A.

An open set on the real line has the characteristic property that it is a countable union of disjoint open intervals.

"Open" is defined relative to a particular topology

Open and closed are not mutually exclusive

A set might be open, closed, both, or neither.

For example, we'll use the real line with its usual topology (the Euclidean topology), which is defined as follows: every interval (a,b) of real numbers belongs to the topology, and every union of such intervals, e.g.

, belongs to the topology.