A computer graphic of a scrambled Rubik's Cube

To denote a sequence of moves on the 3×3×3 Rubik's Cube, this article uses "Singmaster notation",[2] which was developed by David Singmaster.

This argument was not improved upon for many years. Also, it is not a constructive proof: it does not exhibit a concrete position that needs this many moves. It was conjectured that the so-called superflip would be a position that is very difficult. A Rubik's Cube is in the superflip pattern when each corner piece is in the correct position, but each edge piece is incorrectly oriented.[3] In 1992, a solution for the superflip with 20 face turns was found by Dik T. Winter, of which the minimality was shown in 1995 by Michael Reid, providing a new lower bound for the diameter of the cube group. Also in 1995, a solution for superflip in 24 quarter turns was found by Michael Reid, with its minimality proven by Jerry Bryan.[3] In 1998, a new position requiring more than 24 quarter turns to solve was found. The position, which was called a 'superflip composed with four spot' needs 26 quarter turns.[4]

The first upper bounds were based on the 'human' algorithms. By combining the worst-case scenarios for each part of these algorithms, the typical upper bound was found to be around 100.

Perhaps the first concrete value for an upper bound was the 277 moves mentioned by David Singmaster in early 1979. He simply counted the maximum number of moves required by his cube-solving algorithm.[5] Later, Singmaster reported that Elwyn Berlekamp, John Conway, and Richard Guy had come up with a different algorithm that took at most 160 moves. Soon after, Conway’s Cambridge Cubists reported that the cube could be restored in at most 94 moves.[5][6]

The breakthrough was found by Morwen Thistlethwaite; details of Thistlethwaite's Algorithm were published in Scientific American in 1981 by Douglas Hofstadter. The approaches to the cube that lead to algorithms with very few moves are based on group theory and on extensive computer searches. Thistlethwaite's idea was to divide the problem into subproblems. Where algorithms up to that point divided the problem by looking at the parts of the cube that should remain fixed, he divided it by restricting the type of moves you could execute. In particular he divided the cube group into the following chain of subgroups:

Next he prepared tables for each of the right coset spaces

. For each element he found a sequence of moves that took it to the next smaller group. After these preparations he worked as follows. A random cube is in the general cube group

. Next he found this element in the right coset space

. He applied the corresponding process to the cube. This took it to a cube in

. Next he looked up a process that takes the cube to 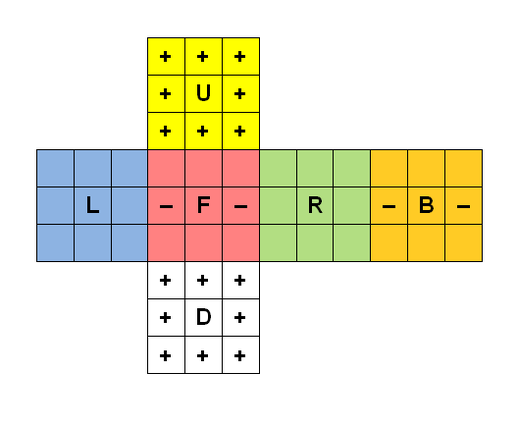 Intermediate state of the Rubik's Cube in Kociemba's algorithm. Any state from G1 will have the "+" and "–" symbols as shown.[7]

Although the whole cube group

are much smaller. The coset space

is the largest and contains only 1082565 elements. The number of moves required by this algorithm is the sum of the largest process in each step.

Initially, Thistlethwaite showed that any configuration could be solved in at most 85 moves. In January 1980 he improved his strategy to yield a maximum of 80 moves. Later that same year, he reduced the number to 63, and then again to 52.[5] By exhaustively searching the coset spaces it was later found that the best possible number of moves for each stage was 7, 10, 13, and 15 giving a total of 45 moves at most.[8]

Thistlethwaite's algorithm was improved by Herbert Kociemba in 1992. He reduced the number of intermediate groups to only two:

As with Thistlethwaite's Algorithm, he would search through the right coset space

to take the cube to group

. Next he searched the optimal solution for group

were both done with a method equivalent to IDA*. The search in

needs at most 12 moves and the search in

at most 18 moves, as Michael Reid showed in 1995. By generating also suboptimal solutions that take the cube to group

and looking for short solutions in

, you usually get much shorter overall solutions. Using this algorithm solutions are typically found of fewer than 21 moves, though there is no proof that it will always do so.

In 1995 Michael Reid proved that using these two groups every position can be solved in at most 29 face turns, or in 42 quarter turns. This result was improved by Silviu Radu in 2005 to 40.

Using these group solutions combined with computer searches will generally quickly give very short solutions. But these solutions do not always come with a guarantee of their minimality. To search specifically for minimal solutions a new approach was needed.

In 1997 Richard Korf[9] announced an algorithm with which he had optimally solved random instances of the cube. Of the ten random cubes he did, none required more than 18 face turns. The method he used is called IDA* and is described in his paper "Finding Optimal Solutions to Rubik's Cube Using Pattern Databases". Korf describes this method as follows

IDA* is a depth-first search that looks for increasingly longer solutions in a series of iterations, using a lower-bound heuristic to prune branches once a lower bound on their length exceeds the current iterations bound.

It works roughly as follows. First he identified a number of subproblems that are small enough to be solved optimally. He used:

In 2006, Silviu Radu further improved his methods to prove that every position can be solved in at most 27 face turns or 35 quarter turns.[11] Daniel Kunkle and Gene Cooperman in 2007 used a supercomputer to show that all unsolved cubes can be solved in no more than 26 moves (in face-turn metric). Instead of attempting to solve each of the billions of variations explicitly, the computer was programmed to bring the cube to one of 15,752 states, each of which could be solved within a few extra moves. All were proved solvable in 29 moves, with most solvable in 26. Those that could not initially be solved in 26 moves were then solved explicitly, and shown that they too could be solved in 26 moves.[12] [13]

Tomas Rokicki reported in a 2008 computational proof that all unsolved cubes could be solved in 25 moves or fewer.[14] This was later reduced to 23 moves.[15] In August 2008 Rokicki announced that he had a proof for 22 moves.[16] Finally, in 2010, Tomas Rokicki, Herbert Kociemba, Morley Davidson, and John Dethridge gave the final computer-assisted proof that all cube positions could be solved with a maximum of 20 face turns.[1][17]

The face-turn and quarter-turn metrics differ in the nature of their antipodes.[19] An antipode is a scrambled cube that is maximally far from solved, one that requires the maximum number of moves to solve. In the half-turn metric with a maximum number of 20, there are hundreds of millions of such positions. In the quarter-turn metric, only a single position (and its two rotations) is known that requires the maximum of 26 moves. Despite significant effort, no additional quarter-turn distance-26 positions have been found. Even at distance 25, only two positions (and their rotations) are known to exist. At distance 24, perhaps 150,000 positions exist.