Orbital elements are the parameters required to uniquely identify a specific orbit. In celestial mechanics these elements are generally considered in classical two-body systems, where a Kepler orbit is used (derived from Newton's laws of motion and Newton's law of universal gravitation). There are many different ways to mathematically describe the same orbit, but certain schemes, each consisting of a set of six parameters, are commonly used in astronomy and orbital mechanics.

A real orbit (and its elements) changes over time due to gravitational perturbations by other objects and the effects of relativity. A Keplerian orbit is merely an idealized, mathematical approximation at a particular time. 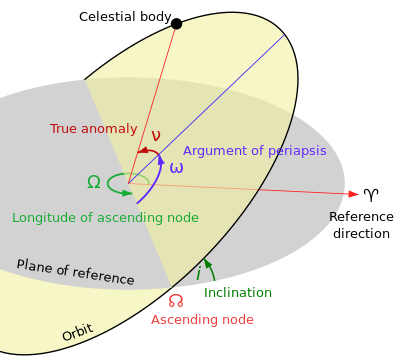 In this diagram, the orbital plane (yellow) intersects a reference plane (gray). For earth-orbiting satellites, the reference plane is usually the Earth's equatorial plane, and for satellites in solar orbits it is the ecliptic plane. The intersection is called the line of nodes, as it connects the center of mass with the ascending and descending nodes. This plane, together with the Vernal Point (♈), establishes a reference frame.

The traditional orbital elements are the six Keplerian elements, after Johannes Kepler and his laws of planetary motion.
When viewed from an inertial frame, two orbiting bodies trace out distinct trajectories. Each of these trajectories has its focus at the common center of mass. When viewed from the non-inertial frame of one body only the trajectory of the opposite body is apparent; Keplerian elements describe these non-inertial trajectories. An orbit has two sets of Keplerian elements depending on which body is used as the point of reference. The reference body is called the primary, the other body is called the secondary. The primary does not necessarily possess more mass than the secondary, and even when the bodies are of equal mass, the orbital elements depend on the choice of the primary.

The main two elements that define the shape and size of the ellipse:

Two elements define the orientation of the orbital plane in which the ellipse is embedded:

The mean anomaly is a mathematically convenient "angle" which varies linearly with time, but which does not correspond to a real geometric angle. It can be converted into the true anomaly

, which does represent the real geometric angle in the plane of the ellipse, between periapsis (closest approach to the central body) and the position of the orbiting object at any given time. Thus, the true anomaly is shown as the red angle

in the diagram, and the mean anomaly is not shown.

The angles of inclination, longitude of the ascending node, and argument of periapsis can also be described as the Euler angles defining the orientation of the orbit relative to the reference coordinate system.

Given an inertial frame of reference and an arbitrary epoch (a specified point in time), exactly six parameters are necessary to unambiguously define an arbitrary and unperturbed orbit.

This is because the problem contains six degrees of freedom. These correspond to the three spatial dimensions which define position (the x, y, z in a Cartesian coordinate system), plus the velocity in each of these dimensions. These can be described as orbital state vectors, but this is often an inconvenient way to represent an orbit, which is why Keplerian elements are commonly used instead.

Sometimes the epoch is considered a "seventh" orbital parameter, rather than part of the reference frame.

If the epoch is defined to be at the moment when one of the elements is zero, the number of unspecified elements is reduced to five. (The sixth parameter is still necessary to define the orbit; it is merely numerically set to zero by convention or "moved" into the definition of the epoch with respect to real-world clock time.)

Keplerian elements can be obtained from orbital state vectors (x-y-z coordinates for position and velocity) by manual transformations or with computer software.[1]

Other orbital parameters can be computed from the Keplerian elements such as the period, apoapsis, and periapsis. (When orbiting the earth, the last two terms are known as the apogee and perigee.) It is common to specify the period instead of the semi-major axis in Keplerian element sets, as each can be computed from the other provided the standard gravitational parameter, GM, is given for the central body.

Different sets of elements are used for various astronomical bodies. The eccentricity, e, and either the semi-major axis, a, or the distance of periapsis, q, are used to specify the shape and size of an orbit. The angle of the ascending node, Ω, the inclination, i, and the argument of periapsis, ω, or the longitude of periapsis, ϖ, specify the orientation of the orbit in its plane. Either the longitude at epoch, L0, the mean anomaly at epoch, M0, or the time of perihelion passage, T0, are used to specify a known point in the orbit. The choices made depend whether the vernal equinox or the node are used as the primary reference. The semi-major axis is known if the mean motion and the gravitational mass are known.[2][3]

It is also quite common to see either the Mean Anomaly (M) or the Mean Longitude (L) expressed directly, without either M0 or L0 as intermediary steps, as a polynomial function with respect to time. This method of expression will consolidate the mean motion (n) into the polynomial as one of the coefficients. The appearance will be that L or M are expressed in a more complicated manner, but we will appear to need one fewer orbital element.

Mean motion can also be obscured behind citations of the orbital Period, P.

are the Euler angles (

from the inertial coordinate frame

is in the equatorial plane of the central body.

is in the direction of the vernal equinox.

is perpendicular to the reference plane.

are in the orbital plane and with

in the direction to the pericenter (periapsis).

is perpendicular to the plane of the orbit.

is mutually perpendicular to

Then, the transformation from the

coordinate frame to the

frame with the Euler angles

signifies the polar argument that can be computed with the standard function atan2(y,x) available in many programming languages.

Under ideal conditions of a perfectly spherical central body, and zero perturbations, all orbital elements, with the exception of the Mean anomaly are constants, and Mean anomaly changes linearly with time, scaled by the Mean motion,

the orbital parameters are

, then the elements at time

{{#invoke:main|main}} Unperturbed, two-body, Newtonian orbits are always conic sections, so the Keplerian elements define an ellipse, parabola, or hyperbola. Real orbits have perturbations, so a given set of Keplerian elements accurately describes an orbit only at the epoch. Evolution of the orbital elements takes place due to the gravitational pull of bodies other than the primary, the nonsphericity of the primary, atmospheric drag, relativistic effects, radiation pressure, electromagnetic forces, and so on.

Keplerian elements can often be used to produce useful predictions at times near the epoch. Alternatively, real trajectories can be modeled as a sequence of Keplerian orbits that osculate ("kiss" or touch) the real trajectory. They can also be described by the so-called planetary equations, differential equations which come in different forms developed by Lagrange, Gauss, Delaunay, Poincaré, or Hill.

{{#invoke:main|main}} Keplerian elements parameters can be encoded as text in a number of formats. The most common of them is the NASA/NORAD "two-line elements"(TLE) format [1], originally designed for use with 80-column punched cards, but still in use because it is the most common format, and can be handled easily by all modern data storages as well.

Depending on the application and object orbit, the data derived from TLEs older than 30 days can become unreliable. Orbital positions can be calculated from TLEs through the SGP/SGP4/SDP4/SGP8/SDP8 algorithms.[4]

Example of a two line element:[5]