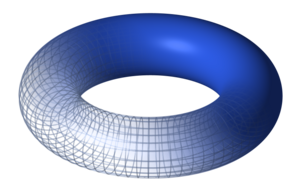 A torus is an orientable surface 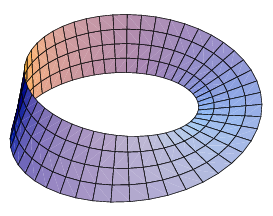 The Möbius strip is a non-orientable surface

The Roman surface is non-orientable

In mathematics, orientability is a property of surfaces in Euclidean space that measures whether it is possible to make a consistent choice of surface normal vector at every point. A choice of surface normal allows one to use the right-hand rule to define a "clockwise" direction of loops in the surface, as needed by Stokes' theorem for instance. More generally, orientability of an abstract surface, or manifold, measures whether one can consistently choose a "clockwise" orientation for all loops in the manifold. Equivalently, a surface is orientable if a two-dimensional figure such as

The notion of orientability can be generalised to higher-dimensional manifolds as well. A manifold is orientable if it has a consistent choice of orientation, and a connected orientable manifold has exactly two different possible orientations. In this setting, various equivalent formulations of orientability can be given, depending on the desired application and level of generality. Formulations applicable to general topological manifolds often employ methods of homology theory, whereas for differentiable manifolds more structure is present, allowing a formulation in terms of differential forms. An important generalization of the notion of orientability of a space is that of orientability of a family of spaces parameterized by some other space (a fiber bundle) for which an orientation must be selected in each of the spaces which varies continuously with respect to changes in the parameter values.

In this animation, a simple analogy is made using a gear that rotates according to the right-hand rule on a surface's normal vector. The orientation of the curves given by the boundaries is given by the direction in which the dots move as they are pushed by the moving gear. On a non-orientable surface, such as the Möbius strip, the boundary would have to move in both directions at once, which is not possible.

A surface S in the Euclidean space R3 is orientable if a two-dimensional figure (for example,

). Otherwise the surface is non-orientable. An abstract surface (i.e., a two-dimensional manifold) is orientable if a consistent concept of clockwise rotation can be defined on the surface in a continuous manner. That is to say that a loop going around one way on the surface can never be continuously deformed (without overlapping itself) to a loop going around the opposite way. This turns out to be equivalent to the question of whether the surface contains no subset that is homeomorphic to the Möbius strip. Thus, for surfaces, the Möbius strip may be considered the source of all non-orientability.

Note that locally an embedded surface always has two sides, so a near-sighted ant crawling on a one-sided surface would think there is an "other side". The essence of one-sidedness is that the ant can crawl from one side of the surface to the "other" without going through the surface or flipping over an edge, but simply by crawling far enough.

In general, the property of being orientable is not equivalent to being two-sided; however, this holds when the ambient space (such as R3 above) is orientable. For example, a torus embedded in

can be one-sided, and a Klein bottle in the same space can be two-sided; here

refers to the Klein bottle.

Any surface has a triangulation: a decomposition into triangles such that each edge on a triangle is glued to at most one other edge. Each triangle is oriented by choosing a direction around the perimeter of the triangle, associating a direction to each edge of the triangle. If this is done in such a way that, when glued together, neighboring edges are pointing in the opposite direction, then this determines an orientation of the surface. Such a choice is only possible if the surface is orientable, and in this case there are exactly two different orientations.

An n-dimensional manifold (either embedded in a finite-dimensional vector space, or an abstract manifold) is called non-orientable if it is possible to take the homeomorphic image of an n-dimensional ball in the manifold and move it through the manifold and back to itself, so that at the end of the path, the ball has been reflected, using the same definition as for surfaces above. Equivalently, a n-dimensional manifold is non-orientable if it contains a homeomorphic image of the space formed by taking the direct product of a (n-1)-dimensional ball B and the unit interval [0,1] and gluing the ball B×{0} at one end to the ball B×{1} at other end with a single reflection. For surfaces, this space is a Möbius strip; for 3-manifolds, this is a solid Klein bottle.

at a point p). A manifold is then said to be orientable if one can choose local orientations consistently throughout the manifold.

Considering simplicial homology, which applies to any triangulable manifold, allows one to consider this a concrete statement about coherently orienting top-dimensional simplices in a triangulation, as done in the surface case above.

If the manifold has a differentiable structure, one can use the language of differential forms (see below).

Equivalently, a n-dimensional differentiable manifold is orientable if there is a consistent choice of oriented basis of tangent vectors at every point of the manifold. This can be formalized in a variety of ways, one of which is the condition that M should possess a volume form: a differential form ω of degree n which is nonzero at every point on the manifold. Given such an n-form, the atlas consisting of local diffeomorphisms sending ω to a positive multiple of the Euclidean volume form on Rn is oriented.

File:Orientation cover of Mobius strip.webm A closely related notion uses the idea of covering space. For a connected manifold M take M*, the set of pairs (x, o) where x is a point of M and o is an orientation at x; here we assume M is either smooth so we can choose an orientation on the tangent space at a point or we use singular homology to define orientation. Then for every open, oriented subset of M we consider the corresponding set of pairs and define that to be an open set of M*. This gives M* a topology and the projection sending (x, o) to x is then a 2-1 covering map. This covering space is called the orientable double cover, as it is orientable. M* is connected if and only if M is not orientable.

Another way to construct this cover is to divide the loops based at a basepoint into either orientation-preserving or orientation-reversing loops. The orientation preserving loops generate a subgroup of the fundamental group which is either the whole group or of index two. In the latter case (which means there is an orientation-reversing path), the subgroup corresponds to a connected double covering; this cover is orientable by construction. In the former case, one can simply take two copies of M, each of which corresponds to a different orientation.

{{#invoke:main|main}} The notion of orientability is essentially derived from the topology of the real general linear group

, specifically that the lowest homotopy group is

This holds not only for differentiable manifolds but for topological manifolds, as the space of self-homotopy equivalences of a sphere also has two connected components, which can be denoted the "orientation-preserving" and "orientation-reversing" maps.

The analogous notion for the symmetric group is the alternating group of even permutations.

In Lorentzian geometry, there are two kinds of orientability: space orientability and time orientability. These play a role in the causal structure of spacetime.[2] In the context of general relativity, a space-time manifold is space orientable if, whenever two right-handed observers head off in rocket ships starting at the same space-time point, and then meet again at another point, they remain right-handed with respect to one another. If a space-time is time-orientable then the two observers will always agree on the direction of time at both points of their meeting. In fact, a space-time is time-orientable if and only if any two observers can agree which of the two meetings preceded the other.[3]

Their product σ = σ+σ− is the determinant, which gives the orientation character. A space-orientation of a pseudo-Riemannian manifold is identified with a section of the associated bundle

where O(M) is the bundle of pseudo-orthogonal frames. Similarly, a time orientation is a section of the associated bundle