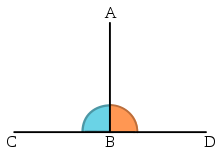 The line segments AB and CD are orthogonal to each other.

In mathematics, orthogonality is the relation of two lines at right angles to one another (perpendicularity), and the generalization of this relation into n dimensions; and to a variety of mathematical relations thought of as describing non-overlapping, uncorrelated, or independent objects of some kind.

The concept of orthogonality has been broadly generalized in mathematics, science, and engineering, especially since the beginning of the 16th century. Much of it has involved the concepts of mathematical functions, calculus, and linear algebra. 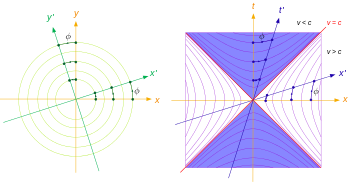 Orthogonality and rotation of coordinate systems compared between left: Euclidean space through circular angle φ, right: in Minkowski spacetime through hyperbolic angle φ (red lines labelled c denote the worldlines of a light signal, a vector is orthogonal to itself if it lies on this line).[5]

In certain cases, the word normal is used to mean orthogonal, particularly in the geometric sense as in the normal to a surface. For example, the y-axis is normal to the curve y = x2 at the origin. However, normal may also refer to the magnitude of a vector. In particular, a set is called orthonormal (orthogonal plus normal) if it is an orthogonal set of unit vectors. As a result, use of the term normal to mean "orthogonal" is often avoided. The word "normal" also has a different meaning in probability and statistics.

A vector space with a bilinear form generalizes the case of an inner product. When the bilinear form applied to two vectors results in zero, then they are orthogonal. The case of a pseudo-Euclidean plane uses the term hyperbolic orthogonality. In the diagram, axes x′ and t′ are hyperbolic-orthogonal for any given φ.

In terms of Euclidean subspaces, the "orthogonal complement" of a line is the plane perpendicular to it, and vice-versa.[8]

Note however that there is no correspondence with regards to perpendicular planes, because vectors in subspaces start from the origin (by the definition of a vector subspace).

In four-dimensional Euclidean space, the orthogonal complement of a line is a hyperplane and vice versa, and that of a plane is a plane.[8]

{{#invoke:main|main}} By using integral calculus, it is common to use the following to define the inner product of two functions f and g:

in the definition of this inner product. In simple cases, w(x) = 1, exactly.

We say that these functions are orthogonal if that inner product is zero:

is the "Kronecker delta" function. In other words, any two of them are orthogonal, and the norm of each is 1 in the case of the orthonormal sequence. See in particular the orthogonal polynomials.

In art, the perspective (imaginary) lines pointing to the vanishing point are referred to as "orthogonal lines".

The term "orthogonal line" often has a quite different meaning in the literature of modern art criticism. Many works by painters such as Piet Mondrian and Burgoyne Diller are noted for their exclusive use of "orthogonal lines" — not, however, with reference to perspective, but rather referring to lines that are straight and exclusively horizontal or vertical, forming right angles where they intersect. For example, an essay at the Web site of the Thyssen-Bornemisza Museum states that "Mondrian ....dedicated his entire oeuvre to the investigation of the balance between orthogonal lines and primary colours." [1]

Orthogonality in programming language design is the ability to use various language features in arbitrary combinations with consistent results.[9] This usage was introduced by van Wijngaarden in the design of Algol 68:

The number of independent primitive concepts has been minimized in order that the language be easy to describe, to learn, and to implement. On the other hand, these concepts have been applied “orthogonally” in order to maximize the expressive power of the language while trying to avoid deleterious superfluities.[10]

Orthogonality is a system design property which guarantees that modifying the technical effect produced by a component of a system neither creates nor propagates side effects to other components of the system. Typically this is achieved through the separation of concerns and encapsulation, and it is essential for feasible and compact designs of complex systems. The emergent behavior of a system consisting of components should be controlled strictly by formal definitions of its logic and not by side effects resulting from poor integration, i.e., non-orthogonal design of modules and interfaces. Orthogonality reduces testing and development time because it is easier to verify designs that neither cause side effects nor depend on them.

In communications, multiple-access schemes are orthogonal when an ideal receiver can completely reject arbitrarily strong unwanted signals from the desired signal using different basis functions. One such scheme is TDMA, where the orthogonal basis functions are nonoverlapping rectangular pulses ("time slots").

Another scheme is orthogonal frequency-division multiplexing (OFDM), which refers to the use, by a single transmitter, of a set of frequency multiplexed signals with the exact minimum frequency spacing needed to make them orthogonal so that they do not interfere with each other. Well known examples include (a, g, and n) versions of 802.11 Wi-Fi; WiMAX; ITU-T G.hn, DVB-T, the terrestrial digital TV broadcast system used in most of the world outside North America; and DMT (Discrete Multi Tone), the standard form of ADSL.

In OFDM, the subcarrier frequencies are chosen so that the subcarriers are orthogonal to each other, meaning that crosstalk between the subchannels is eliminated and intercarrier guard bands are not required. This greatly simplifies the design of both the transmitter and the receiver. In conventional FDM, a separate filter for each subchannel is required.

When performing statistical analysis, independent variables that affect a particular dependent variable are said to be orthogonal if they are uncorrelated,[12] since the covariance forms an inner product. In this case the same results are obtained for the effect of any of the independent variables upon the dependent variable, regardless of whether one models the effects of the variables individually with simple regression or simultaneously with multiple regression. If correlation is present, the factors are not orthogonal and different results are obtained by the two methods. This usage arises from the fact that if centered by subtracting the expected value (the mean), uncorrelated variables are orthogonal in the geometric sense discussed above, both as observed data (i.e., vectors) and as random variables (i.e., density functions). One econometric formalism that is alternative to the maximum likelihood framework, the Generalized Method of Moments, relies on orthogonality conditions. In particular, the Ordinary Least Squares estimator may be easily derived from an orthogonality condition between the explanatory variables and model residuals.

In taxonomy, an orthogonal classification is one in which no item is a member of more than one group, that is, the classifications are mutually exclusive.

In combinatorics, two n×n Latin squares are said to be orthogonal if their superimposition yields all possible n2 combinations of entries.[13]

In synthetic organic chemistry orthogonal protection is a strategy allowing the deprotection of functional groups independently of each other. In supramolecular chemistry the notion of orthogonality refers to the possibility of two or more supramolecular, often non-covalent, interactions being compatible; reversibly forming without interference from the other.

In neuroscience, a sensory map in the brain which has overlapping stimulus coding (e.g. location and quality) is called an orthogonal map.

In board games such as chess which feature a grid of squares, 'orthogonal' is commonly used to mean "in the same row/'rank' or column/'file'". In this context 'orthogonal' and 'diagonal' are considered opposites.[14]

Vinyl records from the 1960s encoded both the left and right stereo channels in a single groove. By making the groove a 90-degree cut into the vinyl, variation in one wall was independent of variations in the other wall. The cartridge senses the resultant motion of the stylus following the groove in two orthogonal directions: 45 degrees from vertical to either side.[15]