It can also be thought of as a test for chirality of a physical phenomenon, in that performing a parity inversion transforms a chiral phenomenon into its mirror image. A parity transformation on something achiral, on the other hand, can be viewed as an identity transformation. All fundamental interactions of elementary particles are symmetric under parity, except for the weak interaction, which is sensitive to chirality and thus provides a handle for probing it, elusive as it is in the midst of stronger interactions. In interactions which are symmetric under parity, such as electromagnetism in atomic and molecular physics, parity serves as a powerful controlling principle underlying quantum transitions.

In a two-dimensional plane, parity is not a simultaneous flip of all coordinates, which would be the same as a rotation by 180 degrees. It is important that the determinant of the P matrix be −1, which does not happen for 180 degree rotation in 2-D, where a parity transformation flips the sign of either x or y, but not both.

Under rotations, classical geometrical objects can be classified into scalars, vectors, and tensors of higher rank. In classical physics, physical configurations need to transform under representations of every symmetry group.

If one adds to this a classification by parity, these can be extended, for example, into notions of

One can define reflections such as

However, angular momentum L is an axial vector,

In classical electrodynamics, the charge density ρ is a scalar, the electric field, E, and current j are vectors, but the magnetic field, H is an axial vector. However, Maxwell's equations are invariant under parity because the curl of an axial vector is a vector.

Effect of spatial inversion on some variables of classical physics

Classical variables, predominantly scalar quantities, which do not change upon spatial inversion include:

, the time when an event occurs

, the mass of a particle

, the energy of the particle

, energy density of the electromagnetic field

, the angular momentum of a particle (both orbital and spin) (axial vector)

Maxwell stress tensor.
All masses, charges, coupling constants, and other physical constants, except those associated with the weak force

Classical variables, predominantly vector quantities, which have their sign flipped by spatial inversion include:

, the position of a particle in three-space

, the velocity of a particle

, the acceleration of the particle

, the linear momentum of a particle

, the force exerted on a particle 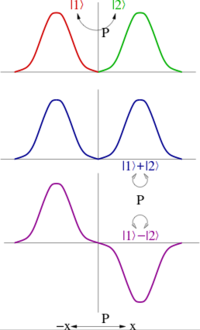 In quantum mechanics, spacetime transformations act on quantum states. The parity transformation, P, is a unitary operator, in general acting on a state ψ as follows: Pψ(r) = eiφ/2ψ(−r).

One must then have P2ψ(r) = eiφψ(r), since an overall phase is unobservable. The operator P2, which reverses the parity of a state twice, leaves the spacetime invariant, and so is an internal symmetry which rotates its eigenstates by phases eiφ. If P2 is an element eiQ of a continuous U(1) symmetry group of phase rotations, then e−iQ/2 is part of this U(1) and so is also a symmetry. In particular, we can define P′ = Pe−iQ/2, which is also a symmetry, and so we can choose to call P′ our parity operator, instead of P. Note that P′2 = 1 and so P′ has eigenvalues ±1. However, when no such symmetry group exists, it may be that all parity transformations have some eigenvalues which are phases other than ±1.

When parity generates the Abelian group ℤ2, one can always take linear combinations of quantum states such that they are either even or odd under parity (see the figure). Thus the parity of such states is ±1. The parity of a multiparticle state is the product of the parities of each state; in other words parity is a multiplicative quantum number

Some of the non-degenerate eigenfunctions of H are unaffected (invariant) by parity P and the others will be merely reversed in sign when the Hamiltonian operator and the parity operator commute:

where c is a constant, the eigenvalue of P,

The intrinsic parity assignments in this section are true for relativistic quantum mechanics as well as quantum field theory.

There is a straightforward extension of these arguments to scalar field theories which shows that scalars have even parity, since

This is true even for a complex scalar field. (Details of spinors are dealt with in the article on the Dirac equation, where it is shown that fermions and antifermions have opposite intrinsic parity.)

With fermions, there is a slight complication because there is more than one spin group.

Parity in the standard model

{{#invoke:see also|seealso}} In the Standard Model of fundamental interactions there are precisely three global internal U(1) symmetry groups available, with charges equal to the baryon number B, the lepton number L and the electric charge Q. The product of the parity operator with any combination of these rotations is another parity operator. It is conventional to choose one specific combination of these rotations to define a standard parity operator, and other parity operators are related to the standard one by internal rotations. One way to fix a standard parity operator is to assign the parities of three particles with linearly independent charges B, L and Q. In general one assigns the parity of the most common massive particles, the proton, the neutron and the electron, to be +1.

Steven Weinberg has shown that if P2 = (−1)F, where F is the fermion number operator, then, since the fermion number is the sum of the lepton number plus the baryon number, F = B + L, for all particles in the Standard Model and since lepton number and baryon number are charges Q of continuous symmetries eiQ, it is possible to redefine the parity operator so that P2 = 1. However, if there exist Majorana neutrinos, which experimentalists today believe is quite possible, their fermion number is equal to one because they are neutrinos while their baryon and lepton numbers are zero because they are Majorana, and so (−1)F would not be embedded in a continuous symmetry group. Thus Majorana neutrinos would have parity ±i.

Parity of the pion

In 1954, a paper by William Chinowsky and Jack Steinberger demonstrated that the pion has negative parity.[3] They studied the decay of an "atom" made from a deuteron (Template:Nuclide2) and a negatively charged pion (Template:Subatomic particle) in a state with zero orbital angular momentum L = 0 into two neutrons (n).

Neutrons are fermions and so obey Fermi–Dirac statistics, which implies that the final state is antisymmetric. Using the fact that the deuteron has spin one and the pion spin zero together with the antisymmetry of the final state they concluded that the two neutrons must have orbital angular momentum L = 1. The total parity is the product of the intrinsic parities of the particles and the extrinsic parity of the spherical harmonic function (−1)L. Since the orbital momentum changes from zero to one in this process, if the process is to conserve the total parity then the products of the intrinsic parities of the initial and final particles must have opposite sign. A deuteron nucleus is made from a proton and a neutron, and so using the aforementioned convention that protons and neutrons have intrinsic parities equal to +1 they argued that the parity of the pion is equal to minus the product of the parities of the two neutrons divided by that of the proton and neutron in the deuteron, (−1)(1)2/(1)2, which is equal to minus one. Thus they concluded that the pion is a pseudoscalar particle.

It was suggested several times and in different contexts that parity might not be conserved, but in the absence of compelling evidence these suggestions were not taken seriously. A careful review by theoretical physicists Tsung Dao Lee and Chen Ning Yang[4] went further, showing that while parity conservation had been verified in decays by the strong or electromagnetic interactions, it was untested in the weak interaction. They proposed several possible direct experimental tests. They were almost ignored, but Lee was able to convince his Columbia colleague Chien-Shiung Wu to try it. She needed special cryogenic facilities and expertise, so the experiment was done at the National Bureau of Standards.

In 1957 C. S. Wu, E. Ambler, R. W. Hayward, D. D. Hoppes, and R. P. Hudson found a clear violation of parity conservation in the beta decay of cobalt-60.[5] As the experiment was winding down, with double-checking in progress, Wu informed Lee and Yang of their positive results, and saying the results need further examination, she asked them not to publicize the results first. However, Lee revealed the results to his Columbia colleagues on 4 January 1957 at a "Friday Lunch" gathering of the Physics Department of Columbia. Three of them, R. L. Garwin, Leon Lederman, and R. Weinrich modified an existing cyclotron experiment, and they immediately verified the parity violation.[6] They delayed publication of their results until after Wu's group was ready, and the two papers appeared back to back in the same physics journal.

After the fact, it was noted that an obscure 1928 experiment had in effect reported parity violation in weak decays, but since the appropriate concepts had not yet been developed, those results had no impact.[7] The discovery of parity violation immediately explained the outstanding τ–θ puzzle in the physics of kaons.

In 2010, it was reported that physicists working with the Relativistic Heavy Ion Collider (RHIC) had created a short-lived parity symmetry-breaking bubble in quark-gluon plasmas. An experiment conducted by several physicists including Yale's Jack Sandweiss as part of the STAR collaboration, suggested that parity may also be violated in the strong interaction.[8]

To every particle one can assign an intrinsic parity as long as nature preserves parity. Although weak interactions do not, one can still assign a parity to any hadron by examining the strong interaction reaction that produces it, or through decays not involving the weak interaction, such as rho meson decay to pions.