The partial derivative of a function f(x, y, ...) with respect to the variable x is variously denoted by

Since in general a partial derivative is a function of the same arguments as was the original function, this functional dependence is sometimes explicitly included in the notation, as in

The partial-derivative symbol is ∂. One of the first known uses of the symbol in mathematics is by Marquis de Condorcet from 1770, who used it for partial differences. The modern partial derivative notation is by Adrien-Marie Legendre (1786), though he later abandoned it; Carl Gustav Jacob Jacobi re-introduced the symbol in 1841.[1]

Suppose that ƒ is a function of more than one variable. For instance,

The graph of this function defines a surface in Euclidean space. To every point on this surface, there are an infinite number of tangent lines. Partial differentiation is the act of choosing one of these lines and finding its slope. Usually, the lines of most interest are those that are parallel to the xz-plane, and those that are parallel to the yz-plane (which result from holding either y or x constant, respectively.)

To find the slope of the line tangent to the function at P(1, 1, 3) that is parallel to the xz-plane, the y variable is treated as constant. The graph and this plane are shown on the right. On the graph below it, we see the way the function looks on the plane y = 1. By finding the derivative of the equation while assuming that y is a constant, the slope of ƒ at the point (x, y, z) is found to be:

The function f can be reinterpreted as a family of functions of one variable indexed by the other variables:

In other words, every value of y defines a function, denoted fy, which is a function of one variable x.[2] That is,

The above procedure can be performed for any choice of a. Assembling the derivatives together into a function gives a function which describes the variation of f in the x direction:

In the above difference quotient, all the variables except xi are held fixed. That choice of fixed values determines a function of one variable

An important example of a function of several variables is the case of a scalar-valued function f(x1,...xn) on a domain in Euclidean space Rn (e.g., on R2 or R3). In this case f has a partial derivative ∂f/∂xj with respect to each variable xj. At the point a, these partial derivatives define the vector

This vector is called the gradient of f at a. If f is differentiable at every point in some domain, then the gradient is a vector-valued function ∇f which takes the point a to the vector ∇f(a). Consequently, the gradient produces a vector field. 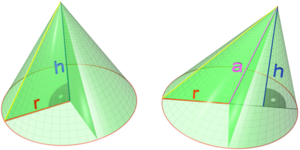 The volume of a cone depends on height and radius

The partial derivative of V with respect to r is

which represents the rate with which a cone's volume changes if its radius is varied and its height is kept constant. The partial derivative with respect to h is

which represents the rate with which the volume changes if its height is varied and its radius is kept constant.

By contrast, the total derivative of V with respect to r and h are respectively

If (for some arbitrary reason) the cone's proportions have to stay the same, and the height and radius are in a fixed ratio k,

This gives the total derivative with respect to r:

Similarly, the total derivative with respect to h is:

Partial derivatives appear in any calculus-based optimization problem with more than one choice variable. For example, in economics a firm may wish to maximize profit π(x, y) with respect to the choice of the quantities x and y of two different types of output. The first order conditions for this optimization are πx = 0 = πy. Since both partial derivatives πx and πy will generally themselves be functions of both arguments x and y, these two first order conditions form a system of two equations in two unknowns.

Equations involving an unknown function's partial derivatives are called partial differential equations. These equations are used to mathematically approximate many physical phenomena like fluid flows, force in a spring, nerve conduction and are frequently encountered in physics, engineering, and other sciences and applied disciplines.

For the following examples, let f be a function in x, y and z.

When dealing with functions of multiple variables, some of these variables may be related to each other, and it may be necessary to specify explicitly which variables are being held constant. In fields such as statistical mechanics, the partial derivative of f with respect to x, holding y and z constant, is often expressed as

Consider the example of

. The "partial" integral can be taken with respect to x (treating y as constant, in a similar manner to partial differentiation):

Here, the "constant" of integration is no longer a constant, but instead a function of all the variables of the original function except x. The reason for this is that all the other variables are treated as constant when taking the partial derivative, so any function which does not involve

will disappear when taking the partial derivative, and we have to account for this when we take the antiderivative. The most general way to represent this is to have the "constant" represent an unknown function of all the other variables.

Thus the set of functions

, where g is any one-argument function, represents the entire set of functions in variables x,y that could have produced the x-partial derivative 2x+y.

If all the partial derivatives of a function are known (for example, with the gradient), then the antiderivatives can be matched via the above process to reconstruct the original function up to a constant.

Own and cross partial derivatives appear in the Hessian matrix which is used in the second order conditions in optimization problems.