Partition of a set 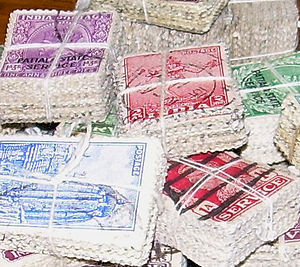 A set of stamps partitioned into bundles: No stamp is in two bundles, and no bundle is empty.

The 52 partitions of a set with 5 elements

The traditional Japanese symbols for the chapters of the Tale of Genji are based on the 52 ways of partitioning five elements.

In mathematics, a partition of a set X is a division of X as a union of non-overlapping and non-empty subsets, sometimes called "parts" or "blocks" or "cells". More formally, these "cells" are both collectively exhaustive and mutually exclusive with respect to the set being partitioned.

A partition of a set X is a set of nonempty subsets of X such that every element x in X is in exactly one of these subsets[1] (i.e., X is a disjoint union of the subsets).

Equivalently, a family of sets P is a partition of X if and only if all of the following conditions hold:[2]

In mathematical notation, these conditions can be represented as

is the empty set.

The sets in P are called the blocks, parts or cells of the partition.[3]

The axiom of choice guarantees for any partition of a set X the existence of a subset of X containing exactly one element from each part of the partition. This implies that given an equivalence relation on a set one can select a canonical representative element from every equivalence class. 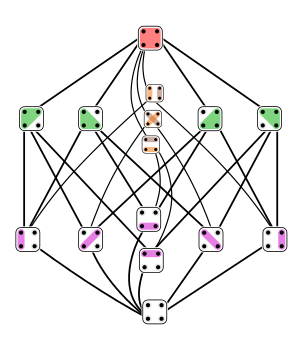 Partitions of a 4-set ordered by refinement

A partition α of a set X is a refinement of a partition ρ of X—and we say that α is finer than ρ and that ρ is coarser than α—if every element of α is a subset of some element of ρ. Informally, this means that α is a further fragmentation of ρ. In that case, it is written that α ≤ ρ.

This finer-than relation on the set of partitions of X is a partial order (so the notation "≤" is appropriate). Each set of elements has a least upper bound and a greatest lower bound, so that it forms a lattice, and more specifically (for partitions of a finite set) it is a geometric lattice.[5] The partition lattice of a 4-element set has 15 elements and is depicted in the Hasse diagram on the left.

Based on the cryptomorphism between geometric lattices and matroids, this lattice of partitions of a finite set corresponds to a matroid in which the base set of the matroid consists of the atoms of the lattice, the partitions with

Another example illustrates the refining of partitions from the perspective of equivalence relations. If D is the set of cards in a standard 52-card deck, the same-color-as relation on D – which can be denoted ~C – has two equivalence classes: the sets {red cards} and {black cards}. The 2-part partition corresponding to ~C has a refinement that yields the same-suit-as relation ~S, which has the four equivalence classes {spades}, {diamonds}, {hearts}, and {clubs}.

A partition of the set N = {1, 2, ..., n} with corresponding equivalence relation ~ is noncrossing provided that for any two 'cells' C1 and C2, either all the elements in C1 are < than all the elements in C2 or they are all > than all the elements in C2. In other words: given distinct numbers a, b, c in N, with a < b < c, if a ~ c (they both are in a cell called C), it follows that also a ~ b and b ~ c, that is b is also in C. The lattice of noncrossing partitions of a finite set has recently taken on importance because of its role in free probability theory. These form a subset of the lattice of all partitions, but not a sublattice, since the join operations of the two lattices do not agree.

and have the exponential generating function

Construction of the Bell triangle

The Bell numbers may also be computed using the Bell triangle in which the first value in each row is copied from the end of the previous row, and subsequent values are computed by adding the two numbers to the left and above left of each position. The Bell numbers are repeated along both sides of this triangle. The numbers within the triangle count partitions in which a given element is the largest singleton.

The number of partitions of an n-element set into exactly k nonempty parts is the Stirling number of the second kind S(n, k).

The number of noncrossing partitions of an n-element set is the Catalan number Cn, given by