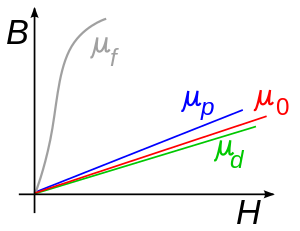 where the permeability, μ, is a scalar if the medium is isotropic or a second rank tensor for an anisotropic medium.

In general, permeability is not a constant, as it can vary with the position in the medium, the frequency of the field applied, humidity, temperature, and other parameters. In a nonlinear medium, the permeability can depend on the strength of the magnetic field. Permeability as a function of frequency can take on real or complex values. In ferromagnetic materials, the relationship between B and H exhibits both non-linearity and hysteresis: B is not a single-valued function of H,[2] but depends also on the history of the material. For these materials it is sometimes useful to consider the incremental permeability defined as

This definition is useful in local linearizations of non-linear material behavior, for example in a Newton–Raphson iterative solution scheme that computes the changing saturation of a magnetic circuit.

B is related to the Lorentz force on a moving charge q:

The charge q is given in coulombs (C), the velocity v in meters per second (m/s), so that the force F is in newtons (N):

H is related to the magnetic dipole density. A magnetic dipole is a closed circulation of electric current. The dipole moment has dimensions current times area, units ampere square-metre (A·m2), and magnitude equal to the current around the loop times the area of the loop.[3] The H field at a distance from a dipole has magnitude proportional to the dipole moment divided by distance cubed,[4] which has dimensions current per unit length.

Consequently, diamagnetism is a form of magnetism that a substance exhibits only in the presence of an externally applied magnetic field. It is generally a quite weak effect in most materials, although superconductors exhibit a strong effect.

{{#invoke:main|main}} Paramagnetism is a form of magnetism which occurs only in the presence of an externally applied magnetic field. Paramagnetic materials are attracted to magnetic fields, hence have a relative magnetic permeability greater than one (or, equivalently, a positive magnetic susceptibility). The magnetic moment induced by the applied field is linear in the field strength and rather weak. It typically requires a sensitive analytical balance to detect the effect. Unlike ferromagnets, paramagnets do not retain any magnetization in the absence of an externally applied magnetic field, because thermal motion causes the spins to become randomly oriented without it. Thus the total magnetization will drop to zero when the applied field is removed. Even in the presence of the field there is only a small induced magnetization because only a small fraction of the spins will be oriented by the field. This fraction is proportional to the field strength and this explains the linear dependency. The attraction experienced by ferromagnets is non-linear and much stronger, so that it is easily observed, for instance, in magnets on one's refrigerator.

For gyromagnetic media (see Faraday rotation) the magnetic permeability response to an alternating electromagnetic field in the microwave frequency domain is treated as a non-diagonal tensor expressed by:[5]

Values for some common materials 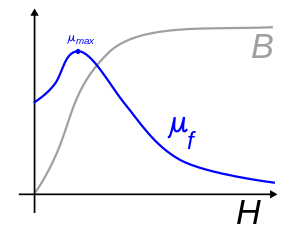 Magnetisation curve for ferromagnets (and ferrimagnets) and corresponding permeability

A good magnetic core material must have high permeability.[20]

For passive magnetic levitation a relative permeability below 1 is needed (corresponding to a negative susceptibility).

Note that the magnetic constant μ0 has an exact value in SI units (that is, there is no uncertainty in its value) because the definition of the ampere fixes its value to 4π × 10−7 H/m exactly.

A useful tool for dealing with high frequency magnetic effects is the complex permeability. While at low frequencies in a linear material the magnetic field and the auxiliary magnetic field are simply proportional to each other through some scalar permeability, at high frequencies these quantities will react to each other with some lag time.[21] These fields can be written as phasors, such that

is the phase delay of

so that the permeability becomes a complex number. By Euler's formula, the complex permeability can be translated from polar to rectangular form,

The ratio of the imaginary to the real part of the complex permeability is called the loss tangent,

which provides a measure of how much power is lost in a material versus how much is stored.