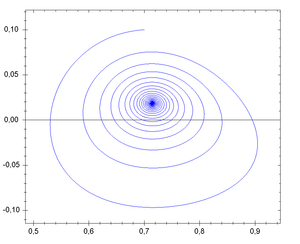 In a phase space, every degree of freedom or parameter of the system is represented as an axis of a multidimensional space; a one-dimensional system is called a phase line, while a two-dimensional system is called a phase plane. For every possible state of the system, or allowed combination of values of the system's parameters, a point is included in the multidimensional space. The system's evolving state over time traces a path (a phase space trajectory for the system) through the high-dimensional space. The phase space trajectory represents the set of states compatible with starting from one particular initial condition, located in the full phase space that represents the set of states compatible with starting from any initial condition. As a whole, the phase diagram represents all that the system can be, and its shape can easily elucidate qualities of the system that might not be obvious otherwise. A phase space may contain a great many dimensions. For instance, a gas containing many molecules may require a separate dimension for each particle's x, y and z positions and momenta as well as any number of other properties.

Evolution of an ensemble of classical systems in phase space (top). The systems are a massive particle in a one-dimensional potential well (red curve, lower figure). The initially compact ensemble becomes swirled up over time.

The motion of an ensemble of systems in this space is studied by classical statistical mechanics. The local density of points in such systems obeys Liouville's Theorem, and so can be taken as constant. Within the context of a model system in classical mechanics, the phase space coordinates of the system at any given time are composed of all of the system's dynamic variables. Because of this, it is possible to calculate the state of the system at any given time in the future or the past, through integration of Hamilton's or Lagrange's equations of motion.

For simple systems, there may be as few as one or two degrees of freedom. One degree of freedom occurs when one has an autonomous ordinary differential equation in a single variable, 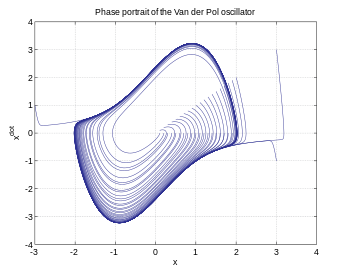 {{ safesubst:#invoke:Unsubst||$N=Refimprove |date=__DATE__ |$B= {{#invoke:Message box|ambox}} }} In thermodynamics and statistical mechanics contexts, the term phase space has two meanings: It is used in the same sense as in classical mechanics. If a thermodynamic system consists of N particles, then a point in the 6N-dimensional phase space describes the dynamic state of every particle in that system, as each particle is associated with three position variables and three momentum variables. In this sense, a point in phase space is said to be a microstate of the system. N is typically on the order of Avogadro's number, thus describing the system at a microscopic level is often impractical. This leads us to the use of phase space in a different sense.