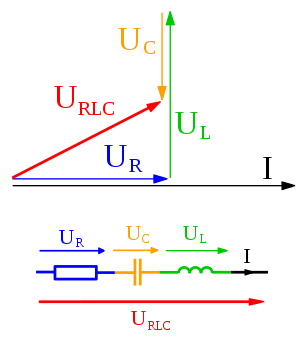 In physics and engineering, a phasor (a portmanteau of phase vector[1][2]), is a complex number representing a sinusoidal function whose amplitude (A), frequency (ω), and phase (θ) are time-invariant. It is also known as complex amplitude. Template:Efn Template:Efn Template:Efn Template:Efn Template:Efn It is a special case of a more general concept called analytic representation.[3] Phasors separate the dependencies on A, ω, and θ into three independent factors. This can be particularly useful because the frequency factor (which includes the time-dependence of the sinusoid) is often common to all the components of a linear combination of sinusoids. In those situations, phasors allow this common feature to be factored out, leaving just the A and θ features. In older texts, a phasor is also referred to as a sinor.{{ safesubst:#invoke:Unsubst||date=__DATE__ |$B= {{#invoke:Category handler|main}}{{#invoke:Category handler|main}}[citation needed] }}

Euler's formula indicates that sinusoids can be represented mathematically as the sum of two complex-valued functions:

or as the real part of one of the functions:

The term phasor can refer to either

or just the complex constant,

. In the latter case, it is understood to be a shorthand notation, encoding the amplitude and phase of an underlying sinusoid.

An even more compact shorthand is angle notation:

A phasor can be considered a vector rotating about the origin in a complex plane. The cosine function is the projection of the vector onto the real axis. Its amplitude is the modulus of the vector, and its argument is the total phase

represents the angle that the vector forms with the real axis at t = 0.

Multiplication by a constant (scalar)

Multiplication of the phasor

by a complex constant,

, produces another phasor. That means its only effect is to change the amplitude and phase of the underlying sinusoid:

would represent an impedance, which is independent of time. In particular it is not the shorthand notation for another phasor. Multiplying a phasor current by an impedance produces a phasor voltage. But the product of two phasors (or squaring a phasor) would represent the product of two sinusoids, which is a non-linear operation that produces new frequency components. Phasor notation can only represent systems with one frequency, such as a linear system stimulated by a sinusoid.

The time derivative or integral of a phasor produces another phasor.Template:Efn For example:

Therefore, in phasor representation, the time derivative of a sinusoid becomes just multiplication by the constant,

Similarly, integrating a phasor corresponds to multiplication by

When we solve a linear differential equation with phasor arithmetic, we are merely factoring

out of all terms of the equation, and reinserting it into the answer. For example, consider the following differential equation for the voltage across the capacitor in an RC circuit:

When the voltage source in this circuit is sinusoidal:

is the unknown quantity to be determined.

In the phasor shorthand notation, the differential equation reduces toTemplate:Efn:

As we have seen, the factor multiplying

represents differences of the amplitude and phase of

In polar coordinate form, it is:

The sum of phasors as addition of rotating vectors

The sum of multiple phasors produces another phasor. That is because the sum of sinusoids with the same frequency is also a sinusoid with that frequency:

or, via the law of cosines on the complex plane (or the trigonometric identity for angle differences):

. A key point is that A3 and θ3 do not depend on ω or t, which is what makes phasor notation possible. The time and frequency dependence can be suppressed and re-inserted into the outcome as long as the only operations used in between are ones that produce another phasor. In angle notation, the operation shown above is written:

In physics, this sort of addition occurs when sinusoids interfere with each other, constructively or destructively. The static vector concept provides useful insight into questions like this: "What phase difference would be required between three identical sinusoids for perfect cancellation?" In this case, simply imagine taking three vectors of equal length and placing them head to tail such that the last head matches up with the first tail. Clearly, the shape which satisfies these conditions is an equilateral triangle, so the angle between each phasor to the next is 120° (2π/3 radians), or one third of a wavelength Template:Var/3. So the phase difference between each wave must also be 120°, as is the case in three-phase power

In other words, what this shows is:

. This is why in single slit diffraction, the minima occurs when light from the far edge travels a full wavelength further than the light from the near edge.

Electrical engineers, electronics engineers, electronic engineering technicians and aircraft engineers all use phasor diagrams to visualize complex constants and variables (phasors). Like vectors, arrows drawn on graph paper or computer displays represent phasors. Cartesian and polar representations each have advantages, with the Cartesian coordinates showing the real and imaginary parts of the phasor and the polar coordinates showing its magnitude and phase.

With phasors, the techniques for solving DC circuits can be applied to solve AC circuits. A list of the basic laws is given below.

Given this we can apply the techniques of analysis of resistive circuits with phasors to analyze single frequency AC circuits containing resistors, capacitors, and inductors. Multiple frequency linear AC circuits and AC circuits with different waveforms can be analyzed to find voltages and currents by transforming all waveforms to sine wave components with magnitude and phase then analyzing each frequency separately, as allowed by the superposition theorem.

In analysis of three phase AC power systems, usually a set of phasors is defined as the three complex cube roots of unity, graphically represented as unit magnitudes at angles of 0, 120 and 240 degrees. By treating polyphase AC circuit quantities as phasors, balanced circuits can be simplified and unbalanced circuits can be treated as an algebraic combination of symmetrical circuits. This approach greatly simplifies the work required in electrical calculations of voltage drop, power flow, and short-circuit currents. In the context of power systems analysis, the phase angle is often given in degrees, and the magnitude in rms value rather than the peak amplitude of the sinusoid.

The technique of synchrophasors uses digital instruments to measure the phasors representing transmission system voltages at widespread points in a transmission network. Small changes in the phasors are sensitive indicators of power flow and system stability.