Photon polarization is the quantum mechanical description of the classical polarized sinusoidal plane electromagnetic wave. Individual photon eigenstates have either right or left circular polarization. A photon that is in a superposition of eigenstates can have linear, circular, or elliptical polarization.

The description of photon polarization contains many of the physical concepts and much of the mathematical machinery of more involved quantum descriptions, such as the quantum mechanics of an electron in a potential well, and forms a fundamental basis for an understanding of more complicated quantum phenomena. Much of the mathematical machinery of quantum mechanics, such as state vectors, probability amplitudes, unitary operators, and Hermitian operators, emerge naturally from the classical Maxwell's equations in the description. The quantum polarization state vector for the photon, for instance, is identical with the Jones vector, usually used to describe the polarization of a classical wave. Unitary operators emerge from the classical requirement of the conservation of energy of a classical wave propagating through media that alter the polarization state of the wave. Hermitian operators then follow for infinitesimal transformations of a classical polarization state.

Many of the implications of the mathematical machinery are easily verified experimentally. In fact, many of the experiments can be performed with two pairs (or one broken pair) of polaroid sunglasses.

Effect of a polarizer on reflection from mud flats. In the first picture, the polarizer is rotated to minimize the effect; in the second it is rotated 90° to maximize it: almost all reflected sunlight is eliminated.

This represents a wave with phase

polarized at an angle

with respect to the x axis. In that case the Jones vector can be written

The state vectors for linear polarization in x or y are special cases of this state vector.

If unit vectors are defined such that

{{#invoke:main|main}} If the phase angles

and the x amplitude equals the y amplitude the wave is circularly polarized. The Jones vector then becomes

If unit vectors are defined such that

We can see that

The general case in which the electric field rotates in the x-y plane and has variable magnitude is called elliptical polarization. The state vector is given by

and then having the real parts of its components interpreted as x and y coordinates respectively. That is:

If only the traced out shape and the direction of the rotation of (x(t), y(t)) is considered when interpreting the polarization state, i.e. only

(where x(t) and y(t) are defined as above) and whether it is overall more right circularly or left circularly polarized (i.e. whether |ψR| > |ψL| or vice versa), it can be seen that the physical interpretation will be the same even if the state is multiplied by an arbitrary phase factor, since

and the direction of rotation will remain the same. In other words, there is no physical difference between two polarization states

, between which only a phase factor differs.

Energy, momentum, and angular momentum of a classical electromagnetic wave

Energy in a plane wave

For a plane wave, this becomes

where the energy has been averaged over a wavelength of the wave.

Fraction of energy in each component

with a similar expression for the y component resulting in

The fraction in both components is

The momentum density is given by the Poynting vector

The momentum density has been averaged over a wavelength.

For a sinusoidal plane wave propagating along

direction and is given by

where again the density is averaged over a wavelength.

Passage of a classical wave through a polaroid filter 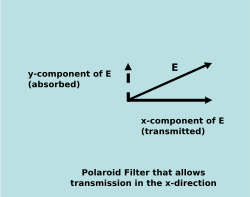 A linear filter transmits one component of a plane wave and absorbs the perpendicular component. In that case, if the filter is polarized in the x direction, the fraction of energy passing through the filter is

Example of energy conservation: Passage of a classical wave through a birefringent crystal

An ideal birefringent crystal transforms the polarization state of an electromagnetic wave without loss of wave energy. Birefringent crystals therefore provide an ideal test bed for examining the conservative transformation of polarization states. Even though this treatment is still purely classical, standard quantum tools such as unitary and Hermitian operators that evolve the state in time naturally emerge.

with respect to the optic axis, the incident state vector can be written

and the state vector for the emerging wave can be written

While the initial state was linearly polarized, the final state is elliptically polarized. The birefringent crystal alters the character of the polarization.

Dual of the final state

is the adjoint of U, the complex conjugate transpose of the matrix.

The fraction of energy that emerges from the crystal is

In this ideal case, all the energy impinging on the crystal emerges from the crystal. An operator U with the property that

where I is the identity operator and U is called a unitary operator. The unitary property is necessary to ensure energy conservation in state transformations.

Doubly refracting Calcite from Iceberg claim, Dixon, New Mexico. This 35 pound (16 kg) crystal, on display at the National Museum of Natural History, is one of the largest single crystals in the United States.

If the crystal is very thin, the final state will be only slightly different from the initial state. The unitary operator will be close to the identity operator. We can define the operator H by

and the adjoint by

Operators like this that are equal to their adjoints are called Hermitian or self-adjoint.

The infinitesimal transition of the polarization state is

Thus, energy conservation requires that infinitesimal transformations of a polarization state occur through the action of a Hermitian operator.

Photons: The connection to quantum mechanics

Einsteins's conclusion from early experiments on the photoelectric effect is that electromagnetic radiation is composed of irreducible packets of energy, known as photons. The energy of each packet is related to the angular frequency of the wave by the relation

is an experimentally determined quantity known as Planck's constant. If there are

photons in a box of volume

, the energy in the electromagnetic field is

and the energy density is

The energy of a photon can be related to classical fields through the correspondence principle which states that for a large number of photons, the quantum and classical treatments must agree. Thus, for very large

The number of photons in the box is then

The correspondence principle also determines the momentum and angular momentum of the photon. For momentum

where kz is the wave number. This implies that the momentum of a photon is

Similarly for the spin angular momentum

where Ec is field strength. This implies that the spin angular momentum of the photon is

of having a spin angular momentum of

and a probability of

of having a spin angular momentum of

The spin of the photon is defined as the coefficient of

in the spin angular momentum calculation. A photon has spin 1 if it is in the

state. The spin operator is defined as the outer product

The eigenvectors of the spin operator are

with eigenvalues 1 and -1, respectively.

We can write the circularly polarized states as

An arbitrary state can be written

When the state is written in spin notation, the spin operator can be written

The eigenvectors of the differential spin operator are

To see this note

The spin angular momentum operator is

The nature of probability in quantum mechanics

Probability for a single photon

Some time before the discovery of quantum mechanics people realized that the connection between light waves and photons must be of a statistical character. What they did not clearly realize, however, was that the wave function gives information about the probability of one photon being in a particular place and not the probable number of photons in that place. The importance of the distinction can be made clear in the following way. Suppose we have a beam of light consisting of a large number of photons split up into two components of equal intensity. On the assumption that the beam is connected with the probable number of photons in it, we should have half the total number going into each component. If the two components are now made to interfere, we should require a photon in one component to be able to interfere with one in the other. Sometimes these two photons would have to annihilate one another and other times they would have to produce four photons. This would contradict the conservation of energy. The new theory, which connects the wave function with probabilities for one photon gets over the difficulty by making each photon go partly into each of the two components. Each photon then interferes only with itself. Interference between two different photons never occurs.
—Paul Dirac, The Principles of Quantum Mechanics, Fourth Edition, Chapter 1

For any legal operators the following inequality, a consequence of the Cauchy-Schwarz inequality, is true.

If B A ψ and A B ψ are defined then

is called the commutator of A and B.

The connection to physics can be made if we identify the operators with physical operators such as the angular momentum and the polarization angle. We have then

which simply states that angular momentum and the polarization angle cannot be measured simultaneously with infinite accuracy.

Much of the mathematical apparatus of quantum mechanics appears in the classical description of a polarized sinusoidal electromagnetic wave. The Jones vector for a classical wave, for instance, is identical with the quantum polarization state vector for a photon. The right and left circular components of the Jones vector can be interpreted as probability amplitudes of spin states of the photon. Energy conservation requires that the states be transformed with a unitary operation. This implies that infinitesimal transformations are transformed with a Hermitian operator. These conclusions are a natural consequence of the structure of Maxwell's equations for classical waves.

These concepts have emerged naturally from Maxwell's equations and Planck's and Einstein's theories. They have been found to be true for many other physical systems. In fact, the typical program is to assume the concepts of this section and then to infer the unknown dynamics of a physical system. This was done, for instance, with the dynamics of electrons. In that case, working back from the principles in this section, the quantum dynamics of particles were inferred, leading to Schrödinger's equation, a departure from Newtonian mechanics. The solution of this equation for atoms led to the explanation of the Balmer series for atomic spectra and consequently formed a basis for all of atomic physics and chemistry.