In graph theory, a planar graph is a graph that can be embedded in the plane, i.e., it can be drawn on the plane in such a way that its edges intersect only at their endpoints. In other words, it can be drawn in such a way that no edges cross each other.[1] Such a drawing is called a plane graph or planar embedding of the graph. A plane graph can be defined as a planar graph with a mapping from every node to a point on a plane, and from every edge to a plane curve on that plane, such that the extreme points of each curve are the points mapped from its end nodes, and all curves are disjoint except on their extreme points.

Plane graphs can be encoded by combinatorial maps.

The equivalence class of topologically equivalent drawings on the sphere is called a planar map. Although a plane graph has an external or unbounded face, none of the faces of a planar map have a particular status.

A generalization of planar graphs are graphs which can be drawn on a surface of a given genus. In this terminology, planar graphs have graph genus 0, since the plane (and the sphere) are surfaces of genus 0. See "graph embedding" for other related topics.

A finite graph is planar if and only if it does not contain a subgraph that is a subdivision of K5 (the complete graph on five vertices) or K3,3 (complete bipartite graph on six vertices, three of which connect to each of the other three, also known as the utility graph).

A subdivision of a graph results from inserting vertices into edges (for example, changing an edge •——• to •—•—•) zero or more times. 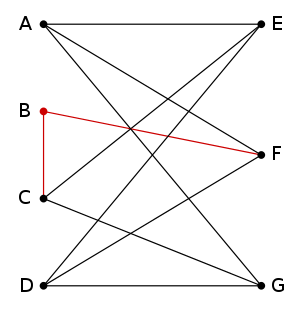 An example of a graph which doesn't have K5 or K3,3 as its subgraph. However, it has a subgraph that is homeomorphic to K3,3 and is therefore not planar.

Instead of considering subdivisions, Wagner's theorem deals with minors:

A finite graph is planar if and only if it does not have K5 or K3,3 as a minor.

An animation showing that the Petersen graph contains a minor isomorphic to the K3,3 graph

Klaus Wagner asked more generally whether any minor-closed class of graphs is determined by a finite set of "forbidden minors". This is now the Robertson–Seymour theorem, proved in a long series of papers. In the language of this theorem, K5 and K3,3 are the forbidden minors for the class of finite planar graphs.

In practice, it is difficult to use Kuratowski's criterion to quickly decide whether a given graph is planar. However, there exist fast algorithms for this problem: for a graph with n vertices, it is possible to determine in time O(n) (linear time) whether the graph may be planar or not (see planarity testing).

In this sense, planar graphs are sparse graphs, in that they have only O(v) edges, asymptotically smaller than the maximum O(v2). The graph K3,3, for example, has 6 vertices, 9 edges, and no cycles of length 3. Therefore, by Theorem 2, it cannot be planar. Note that these theorems provide necessary conditions for planarity that are not sufficient conditions, and therefore can only be used to prove a graph is not planar, not that it is planar. If both theorem 1 and 2 fail, other methods may be used.

{{#invoke:main|main}} Euler's formula states that if a finite, connected, planar graph is drawn in the plane without any edge intersections, and v is the number of vertices, e is the number of edges and f is the number of faces (regions bounded by edges, including the outer, infinitely large region), then

As an illustration, in the butterfly graph given above, v = 5, e = 6 and f = 3. If the second graph is redrawn without edge intersections, it has v = 4, e = 6 and f = 4. In general, if the property holds for all planar graphs of f faces, any change to the graph that creates an additional face while keeping the graph planar would keep v − e + f an invariant. Since the property holds for all graphs with f = 2, by mathematical induction it holds for all cases. Euler's formula can also be proved as follows: if the graph isn't a tree, then remove an edge which completes a cycle. This lowers both e and f by one, leaving v − e + f constant. Repeat until the remaining graph is a tree; trees have v =  e + 1 and f = 1, yielding v − e + f = 2. i.e. the Euler characteristic is 2.

In a finite, connected, simple, planar graph, any face (except possibly the outer one) is bounded by at least three edges and every edge touches at most two faces; using Euler's formula, one can then show that these graphs are sparse in the sense that e ≤ 3v − 6 if v ≥ 3.

A Schlegel diagram of a regular dodecahedron, forming a planar graph from a convex polyhedron.

(one face has minimum 3 edges and each edge has maximum two faces) it follows via algebraic transformations that the average degree is strictly less than 6. Otherwise the given graph can't be planar.

Example of the circle packing theorem on K5, the complete graph on five vertices, minus one edge.

We say that two circles drawn in a plane kiss (or osculate) whenever they intersect in exactly one point. A "coin graph" is a graph formed by a set of circles, no two of which have overlapping interiors, by making a vertex for each circle and an edge for each pair of circles that kiss. The circle packing theorem, first proved by Paul Koebe in 1936, states that a graph is planar if and only if it is a coin graph.

This result provides an easy proof of Fáry's theorem, that every planar graph can be embedded in the plane in such a way that its edges are straight line segments that do not cross each other. If one places each vertex of the graph at the center of the corresponding circle in a coin graph representation, then the line segments between centers of kissing circles do not cross any of the other edges.

The Goldner–Harary graph is maximal planar. All its faces are bounded by three edges.

A simple graph is called maximal planar if it is planar but adding any edge (on the given vertex set) would destroy that property. All faces (including the outer one) are then bounded by three edges, explaining the alternative term plane triangulation. The alternative names "triangular graph"[2] or "triangulated graph"[3] have also been used, but are ambiguous, as they more commonly refer to the line graph of a complete graph and to the chordal graphs respectively.

Apollonian networks are the maximal planar graphs formed by repeatedly splitting triangular faces into triples of smaller triangles. Equivalently, they are the planar 3-trees.

Outerplanar graphs are graphs with an embedding in the plane such that all vertices belong to the unbounded face of the embedding. Every outerplanar graph is planar, but the converse is not true: K4 is planar but not outerplanar. A theorem similar to Kuratowski's states that a finite graph is outerplanar if and only if it does not contain a subdivision of K4 or of K2,3.

A Halin graph is a graph formed from an undirected plane tree (with no degree-two nodes) by connecting its leaves into a cycle, in the order given by the plane embedding of the tree. Equivalently, it is a polyhedral graph in which one face is adjacent to all the others. Every Halin graph is planar. Like outerplanar graphs, Halin graphs have low treewidth, making many algorithmic problems on them more easily solved than in unrestricted planar graphs.[5]

Any graph may be embedded into three-dimensional space without crossings. However, a three-dimensional analogue of the planar graphs is provided by the linklessly embeddable graphs, graphs that can be embedded into three-dimensional space in such a way that no two cycles are topologically linked with each other. In analogy to Kuratowski's and Wagner's characterizations of the planar graphs as being the graphs that do not contain K5 or K3,3 as a minor, the linklessly embeddable graphs may be characterized as the graphs that do not contain as a minor any of the seven graphs in the Petersen family. In analogy to the characterizations of the outerplanar and planar graphs as being the graphs with Colin de Verdière graph invariant at most two or three, the linklessly embeddable graphs are the graphs that have Colin de Verdière invariant at most four.

The asymptotic for the number of (labeled) planar graphs on

Almost all planar graphs have an exponential number of automorphisms.[7]

The number of unlabeled (non-isomorphic) planar graphs on

Other facts and definitions

Every planar graph is 4-partite, or 4-colorable; this is the graph-theoretical formulation of the four color theorem.

A planar graph and its dual

Given an embedding G of a (not necessarily simple) connected graph in the plane without edge intersections, we construct the dual graph G* as follows: we choose one vertex in each face of G (including the outer face) and for each edge e in G we introduce a new edge in G* connecting the two vertices in G* corresponding to the two faces in G that meet at e. Furthermore, this edge is drawn so that it crosses e exactly once and that no other edge of G or G* is intersected. Then G* is again the embedding of a (not necessarily simple) planar graph; it has as many edges as G, as many vertices as G has faces and as many faces as G has vertices. The term "dual" is justified by the fact that G** = G; here the equality is the equivalence of embeddings on the sphere. If G is the planar graph corresponding to a convex polyhedron, then G* is the planar graph corresponding to the dual polyhedron.

A Euclidean graph is a graph in which the vertices represent points in the plane, and the edges are assigned lengths equal to the Euclidean distance between those points; see Geometric graph theory.

A plane graph is said to be convex if all of its faces (including the outer face) are convex polygons. A planar graph may be drawn convexly if and only if it is a subdivision of a 3-vertex-connected planar graph.

Scheinerman's conjecture (now a theorem) states that every planar graph can be represented as an intersection graph of line segments in the plane.

The planar separator theorem states that every n-vertex planar graph can be partitioned into two subgraphs of size at most 2n/3 by the removal of O(√n) vertices. As a consequence, planar graphs also have treewidth and branch-width O(√n).

For two planar graphs with v vertices, it is possible to determine in time O(v) whether they are isomorphic or not (see also graph isomorphism problem).[9]