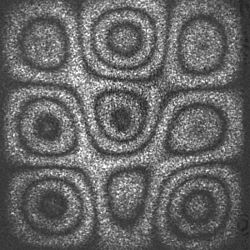 In continuum mechanics, plate theories are mathematical descriptions of the mechanics of flat plates that draws on the theory of beams. Plates are defined as plane structural elements with a small thickness compared to the planar dimensions.[1] The typical thickness to width ratio of a plate structure is less than 0.1. A plate theory takes advantage of this disparity in length scale to reduce the full three-dimensional solid mechanics problem to a two-dimensional problem. The aim of plate theory is to calculate the deformation and stresses in a plate subjected to loads.

Of the numerous plate theories that have been developed since the late 19th century, two are widely accepted and used in engineering. These are 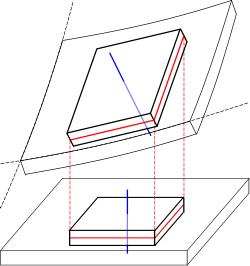 The Kirchhoff–Love theory is an extension of Euler–Bernoulli beam theory to thin plates. The theory was developed in 1888 by Love[2] using assumptions proposed by Kirchhoff. It is assumed that a mid-surface plane can be used to represent the three-dimensional plate in two-dimensional form.

The following kinematic assumptions that are made in this theory:[3]

The Kirchhoff hypothesis implies that the displacement field has the form

are the Cartesian coordinates on the mid-surface of the undeformed plate,

is the coordinate for the thickness direction,

are the in-plane displacements of the mid-surface, and

is the displacement of the mid-surface in the

are the angles of rotation of the normal to the mid-surface, then in the Kirchhoff–Love theory

Therefore the only non-zero strains are in the in-plane directions.

This theory is nonlinear because of the quadratic terms in the strain-displacement relations.

and the thickness of the plate is

If the plate is loaded by an external distributed load

direction, the principle of virtual work then leads to the equilibrium equations

For moderate rotations, the strain-displacement relations take the von Karman form and the equilibrium equations can be expressed as

The boundary conditions that are needed to solve the equilibrium equations of plate theory can be obtained from the boundary terms in the principle of virtual work.

For small strains and small rotations, the boundary conditions are

Note that the quantity

is an effective shear force.

do not appear in the equilibrium equations it is implicitly assumed that these quantities do not have any effect on the momentum balance and are neglected.

It is more convenient to work with the stress and moment results that enter the equilibrium equations. These are related to the displacements by

The extensional stiffnesses are the quantities

The bending stiffnesses (also called flexural rigidity) are the quantities

{{#invoke:main|main}} For an isotropic and homogeneous plate, the stress–strain relations are

The moments corresponding to these stresses are

In direct tensor notation, the governing equation is

For a transversely loaded plate without axial deformations, the governing equation has the form

and in direct notation

, the governing equation is

For an orthotropic plate

per unit area is

{{#invoke:main|main}} The dynamic theory of plates determines the propagation of waves in the plates, and the study of standing waves and vibration modes.

where, for a plate with density

The figures below show some vibrational modes of a circular plate.

is the bending stiffness of the plate. For a uniform plate of thickness

designate the angles which the mid-surface makes with the

Then the Mindlin–Reissner hypothesis implies that

Depending on the amount of rotation of the plate normals two different approximations for the strains can be derived from the basic kinematic assumptions.

) is applied so that the correct amount of internal energy is predicted by the theory. Then

The resultant shear forces in the above equations are defined as

The boundary conditions are indicated by the boundary terms in the principle of virtual work.

If the only external force is a vertical force on the top surface of the plate, the boundary conditions are

does not appear in the equilibrium equations it is implicitly assumed that it do not have any effect on the momentum balance and is neglected. This assumption is also called the plane stress assumption. The remaining stress–strain relations for an orthotropic material, in matrix form, can be written as

The extensional stiffnesses are the quantities

The bending stiffnesses are the quantities

{{#invoke:main|main}} For uniformly thick, homogeneous, and isotropic plates, the stress–strain relations in the plane of the plate are

is the Young's modulus,

is the Poisson's ratio, and

are the in-plane strains. The through-the-thickness shear stresses and strains are related by

is the shear modulus.

The relations between the stress resultants and the generalized displacements for an isotropic Mindlin–Reissner plate are:

The bending rigidity is defined as the quantity

For a plate of thickness

, the bending rigidity has the form

If we ignore the in-plane extension of the plate, the governing equations are

, the three governing equations are

The boundary conditions along the edges of a rectangular plate are

The governing equations for the plate then reduce to two coupled ordinary differential equations:

, since the beam is clamped, the boundary conditions are

The boundary conditions at