For compact 2-dimensional surfaces without boundary, if every loop can be continuously tightened to a point, then the surface is topologically homeomorphic to a 2-sphere (usually just called a sphere). The Poincaré conjecture asserts that the same is true for 3-dimensional spaces.

By contrast, neither of the two colored loops on this torus can be continuously tightened to a point. A torus is not homeomorphic to a sphere.

In mathematics, the Poincaré conjecture (Template:IPAc-en Template:Respell; Template:IPA-fr)[1] is a theorem about the characterization of the 3-sphere, which is the hypersphere that bounds the unit ball in four-dimensional space. The conjecture states:

Every simply connected, closed 3-manifold is homeomorphic to the 3-sphere.

Originally conjectured by Henri Poincaré, the theorem concerns a space that locally looks like ordinary three-dimensional space but is connected, finite in size, and lacks any boundary (a closed 3-manifold). The Poincaré conjecture claims that if such a space has the additional property that each loop in the space can be continuously tightened to a point, then it is necessarily a three-dimensional sphere. An analogous result has been known in higher dimensions for some time.

After nearly a century of effort by mathematicians, Grigori Perelman presented a proof of the conjecture in three papers made available in 2002 and 2003 on arXiv. The proof followed on from the program of Richard Hamilton to use the Ricci flow to attempt to solve the problem. Hamilton later introduced a modification of the standard Ricci flow, called Ricci flow with surgery to systematically excise singular regions as they develop, in a controlled way, but was unable to prove this method "converged" in three dimensions.[2] Perelman completed this portion of the proof. Several teams of mathematicians have verified that Perelman's proof is correct.

The Poincaré conjecture, before being proven, was one of the most important open questions in topology. It is one of the seven Millennium Prize Problems, for which the Clay Mathematics Institute offered a $1,000,000 prize for the first correct solution. Perelman's work survived review and was confirmed in 2006, leading to his being offered a Fields Medal, which he declined. Perelman was awarded the Millennium Prize on March 18, 2010.[3] On July 1, 2010, he turned down the prize saying that he believes his contribution in proving the Poincaré conjecture was no greater than that of Hamilton's (who first suggested using the Ricci flow for the solution).[4][5] The Poincaré conjecture is the only solved Millennium problem.

On December 22, 2006, the journal Science honored Perelman's proof of the Poincaré conjecture as the scientific "Breakthrough of the Year", the first time this had been bestowed in the area of mathematics.[6]

At the beginning of the 20th century, Henri Poincaré was working on the foundations of topology—what would later be called combinatorial topology and then algebraic topology. He was particularly interested in what topological properties characterized a sphere.

Poincaré claimed in 1900 that homology, a tool he had devised based on prior work by Enrico Betti, was sufficient to tell if a 3-manifold was a 3-sphere. However, in a 1904 paper he described a counterexample to this claim, a space now called the Poincaré homology sphere. The Poincaré sphere was the first example of a homology sphere, a manifold that had the same homology as a sphere, of which many others have since been constructed. To establish that the Poincaré sphere was different from the 3-sphere, Poincaré introduced a new topological invariant, the fundamental group, and showed that the Poincaré sphere had a fundamental group of order 120, while the 3-sphere had a trivial fundamental group. In this way he was able to conclude that these two spaces were, indeed, different.

The original phrasing was as follows:

Consider a compact 3-dimensional manifold V without boundary. Is it possible that the fundamental group of V could be trivial, even though V is not homeomorphic to the 3-dimensional sphere?

Poincaré never declared whether he believed this additional condition would characterize the 3-sphere, but nonetheless, the statement that it does is known as the Poincaré conjecture. Here is the standard form of the conjecture:

Every simply connected, closed 3-manifold is homeomorphic to the 3-sphere.

This problem seems to have lain dormant for a time, until J. H. C. Whitehead revived interest in the conjecture, when in the 1930s he first claimed a proof, and then retracted it. In the process, he discovered some interesting examples of simply-connected non-compact 3-manifolds not homeomorphic to R3, the prototype of which is now called the Whitehead manifold.

In the 1950s and 1960s, other mathematicians were to claim proofs only to discover a flaw. Influential mathematicians such as Bing, Haken, Moise, and Papakyriakopoulos attacked the conjecture. In 1958 Bing proved a weak version of the Poincaré conjecture: if every simple closed curve of a compact 3-manifold is contained in a 3-ball, then the manifold is homeomorphic to the 3-sphere.[7] Bing also described some of the pitfalls in trying to prove the Poincaré conjecture.[8]

Over time, the conjecture gained the reputation of being particularly tricky to tackle. John Milnor commented that sometimes the errors in false proofs can be "rather subtle and difficult to detect."[9] Work on the conjecture improved understanding of 3-manifolds. Experts in the field were often reluctant to announce proofs, and tended to view any such announcement with skepticism. The 1980s and 1990s witnessed some well-publicized fallacious proofs (which were not actually published in peer-reviewed form).[10][11]

An exposition of attempts to prove this conjecture can be found in the non-technical book Poincaré's Prize by George Szpiro.[12]

{{#invoke:main|main}} The classification of closed surfaces gives an affirmative answer to the analogous question in two dimensions. For dimensions greater than three, one can pose the Generalized Poincaré conjecture: is a homotopy n-sphere homeomorphic to the n-sphere? A stronger assumption is necessary; in dimensions four and higher there are simply-connected manifolds which are not homeomorphic to an n-sphere.

These earlier successes in higher dimensions left the case of three dimensions in limbo. The Poincaré conjecture was essentially true in both dimension four and all higher dimensions for substantially different reasons. In dimension three, the conjecture had an uncertain reputation until the geometrization conjecture put it into a framework governing all 3-manifolds. John Morgan wrote:[13] 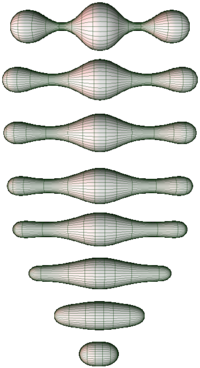 Several stages of the Ricci flow on a two-dimensional manifold

Hamilton's program was started in his 1982 paper in which he introduced the Ricci flow on a manifold and showed how to use it to prove some special cases of the Poincaré conjecture.[14] In the following years he extended this work, but was unable to prove the conjecture. The actual solution was not found until Grigori Perelman published his papers.

In late 2002 and 2003 Perelman posted three papers on the arXiv.[15][16][17] In these papers he sketched a proof of the Poincaré conjecture and a more general conjecture, Thurston's geometrization conjecture, completing the Ricci flow program outlined earlier by Richard Hamilton.

From May to July 2006, several groups presented papers that filled in the details of Perelman's proof of the Poincaré conjecture, as follows:

All three groups found that the gaps in Perelman's papers were minor and could be filled in using his own techniques.

In December 2006, the journal Science honored the proof of Poincaré conjecture as the Breakthrough of the Year and featured it on its cover.[6]

{{#invoke:main|main}} Hamilton's program for proving the Poincaré conjecture involves first putting a Riemannian metric on the unknown simply connected closed 3-manifold. The idea is to try to improve this metric; for example, if the metric can be improved enough so that it has constant curvature, then it must be the 3-sphere. The metric is improved using the Ricci flow equations;

A special case of Perelman's theorems about Ricci flow with surgery is given as follows.

This result implies the Poincaré conjecture because it is easy to check it for the possible manifolds listed in the conclusion.

The condition on the fundamental group turns out to be necessary (and sufficient) for finite time extinction, and in particular includes the case of trivial fundamental group. It is equivalent to saying that the prime decomposition of the manifold has no acyclic components, and turns out to be equivalent to the condition that all geometric pieces of the manifold have geometries based on the two Thurston geometries S2×R and S3. By studying the limit of the manifold for large time, Perelman proved Thurston's geometrization conjecture for any fundamental group: at large times the manifold has a thick-thin decomposition, whose thick piece has a hyperbolic structure, and whose thin piece is a graph manifold, but this extra complication is not necessary for proving just the Poincaré conjecture.[27]

In November 2002, Russian mathematician Grigori Perelman posted the first of a series of three eprints on arXiv outlining a solution of the Poincaré conjecture. Perelman's proof uses a modified version of a Ricci flow program developed by Richard Hamilton. In August 2006, Perelman was awarded, but declined, the Fields Medal for his proof. On March 18, 2010, the Clay Mathematics Institute awarded Perelman the $1 million Millennium Prize in recognition of his proof.[28] Perelman rejected that prize as well.[4][29]

Perelman proved the conjecture by deforming the manifold using the Ricci flow (which behaves similarly to the heat equation that describes the diffusion of heat through an object). The Ricci flow usually deforms the manifold towards a rounder shape, except for some cases where it stretches the manifold apart from itself towards what are known as singularities. Perelman and Hamilton then chop the manifold at the singularities (a process called "surgery") causing the separate pieces to form into ball-like shapes. Major steps in the proof involve showing how manifolds behave when they are deformed by the Ricci flow, examining what sort of singularities develop, determining whether this surgery process can be completed and establishing that the surgery need not be repeated infinitely many times.

Sometimes an otherwise complicated operation reduces to multiplication by a scalar (a number). Such numbers are called eigenvalues of that operation. Eigenvalues are closely related to vibration frequencies and are used in analyzing a famous problem: can you hear the shape of a drum?. Essentially an eigenvalue is like a note being played by the manifold. Perelman proved this note goes up as the manifold is deformed by the Ricci flow. This helped him eliminate some of the more troublesome singularities that had concerned Hamilton, particularly the cigar soliton solution, which looked like a strand sticking out of a manifold with nothing on the other side. In essence Perelman showed that all the strands that form can be cut and capped and none stick out on one side only.

Completing the proof, Perelman takes any compact, simply connected, three-dimensional manifold without boundary and starts to run the Ricci flow. This deforms the manifold into round pieces with strands running between them. He cuts the strands and continues deforming the manifold until eventually he is left with a collection of round three-dimensional spheres. Then he rebuilds the original manifold by connecting the spheres together with three-dimensional cylinders, morphs them into a round shape and sees that, despite all the initial confusion, the manifold was in fact homeomorphic to a sphere. This process is described in the fictional work by Tina S. Chang cited below.

One immediate question was how can one be sure there aren't infinitely many cuts necessary? Otherwise the cutting might progress forever. Perelman proved this can't happen by using minimal surfaces on the manifold. A minimal surface is essentially a soap film. Hamilton had shown that the area of a minimal surface decreases as the manifold undergoes Ricci flow. Perelman verified what happened to the area of the minimal surface when the manifold was sliced. He proved that eventually the area is so small that any cut after the area is that small can only be chopping off three-dimensional spheres and not more complicated pieces. This is described as a battle with a Hydra by Sormani in Szpiro's book cited below. This last part of the proof appeared in Perelman's third and final paper on the subject.