A point reflection in 2 dimensions.

The term "reflection" is loose, and considered by some an abuse of language, with "inversion" preferred; however, "point reflection" is widely used. Such maps are involutions, meaning that they have order 2 – they are their own inverse: applying them twice yields the identity map – which is also true of other maps called "reflections". More narrowly, a "reflection" refers to a reflection in a hyperplane (

dimensional affine subspace – a point on the line, a line in the plane, a plane in 3-space), with the hyperplane being fixed, but more broadly "reflection" is applied to any involution of Euclidean space, and the fixed set (an affine space of dimension k, where

) is called the "mirror". In dimension 1 these coincide, as a point is a hyperplane in the line.

In terms of linear algebra, assuming the origin is fixed, involutions are exactly the diagonalizable maps with all eigenvalues either 1 or −1. Reflection in a hyperplane has a single −1 eigenvalue (and multiplicity

on the 1 eigenvalue), while point reflection has only the −1 eigenvalue (with multiplicity n).

The term "inversion" should not be confused with inversive geometry, where "inversion" is defined with respect to a circle

Given a vector a in the Euclidean space Rn, the formula for the reflection of a across the point p is

In the case where p is the origin, point reflection is simply the negation of the vector a (see reflection through the origin).

In Euclidean geometry, the inversion of a point X with respect to a point P is a point X* such that P is the midpoint of the line segment with endpoints X and X*. In other words, the vector from X to P is the same as the vector from P to X*.

The formula for the inversion in P is

where a, x and x* are the position vectors of P, X and X* respectively.

This mapping is an isometric involutive affine transformation which has exactly one fixed point, which is P.

Point reflection as a special case of uniform scaling or homothety

When the inversion point P coincides with the origin, point reflection is equivalent to a special case of uniform scaling: uniform scaling with scale factor equal to -1. This is an example of linear transformation.

When P does not coincide with the origin, point reflection is equivalent to a special case of homothetic transformation: homothety with homothetic center coinciding with P, and scale factor = -1. This is an example of non-linear affine transformation). 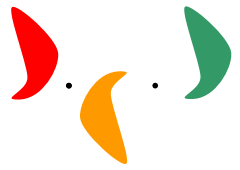 The composition of two offset point reflections in 2-dimensions is a translation.

In the case n = 1, the point reflection group is the full isometry group of the line.

In odd-dimensional Euclidean space, say (2N + 1)-dimensional space, it is equivalent to N rotations over π in each plane of an arbitrary set of N mutually orthogonal planes intersecting at P, combined with the reflection in the 2N-dimensional subspace spanned by these rotation planes. Therefore it reverses rather than preserves orientation, it is an indirect isometry.

Geometrically in 3D it amounts to rotation about an axis through P by an angle of 180°, combined with reflection in the plane through P which is perpendicular to the axis; the result does not depend on the orientation (in the other sense) of the axis. Notations for the type of operation, or the type of group it generates, are

, Ci, S2, and 1×. The group type is one of the three symmetry group types in 3D without any pure rotational symmetry, see cyclic symmetries with n=1.

Closely related to inverse in a point is reflection in respect to a plane, which can be thought of as a "inversion in a plane".

Inversion with respect to the origin

Inversion with respect to the origin corresponds to additive inversion of the position vector, and also to scalar multiplication by −1. The operation commutes with every other linear transformation, but not with translation: it is in the central of the general linear group. "Inversion" without indicating "in a point", "in a line" or "in a plane", means this inversion; in physics 3-dimensional reflection through the origin is also called a parity transformation.

, and can also be written as

is the identity matrix. In three dimensions, this sends

As a scalar matrix, it is represented in every basis by a matrix with

on the diagonal, and, together with the identity, is the center of the orthogonal group

In 2 dimensions, it is in fact rotation by 180 degrees, and in dimension

as an internal direct product.

In SO(2r), reflection through the origin is the farthest point from the identity element with respect to the usual metric. In O(2r+1), reflection through the origin is not in SO(2r+1) (it is in the non-identity component), and there is no natural sense in which it is a "farther point" than any other point in the non-identity component, but it does provide a base point in the other component.

in the Spin group. This is particularly confusing for even Spin groups, as

Reflection through the identity extends to an automorphism of a Clifford algebra, called the main involution or grade involution.

Reflection through the identity lifts to a pseudoscalar.