The distribution was first introduced by Siméon Denis Poisson (1781–1840) and published, together with his probability theory, in 1837 in his work Recherches sur la probabilité des jugements en matière criminelle et en matière civile (“Research on the Probability of Judgments in Criminal and Civil Matters”).[3] The work theorized about the number of wrongful convictions in a given country by focusing on certain random variables N that count, among other things, the number of discrete occurrences (sometimes called "events" or “arrivals”) that take place during a time-interval of given length. The result had been given previously by Abraham de Moivre (1711) in De Mensura Sortis seu; de Probabilitate Eventuum in Ludis a Casu Fortuito Pendentibus in Philosophical Transactions of the Royal Society, p. 219.[4]

A practical application of this distribution was made by Ladislaus Bortkiewicz in 1898 when he was given the task of investigating the number of soldiers in the Prussian army killed accidentally by horse kicks; this experiment introduced the Poisson distribution to the field of reliability engineering.[5]

The Poisson distribution can be applied to systems with a large number of possible events, each of which is rare. How many such events will occur during a fixed time interval? Under the right circumstances, this is a random number with a Poisson distribution.

Bounds for the median (ν) of the distribution are known and are sharp:[8]

where the {braces} denote Stirling numbers of the second kind.[9] The coefficients of the polynomials have a combinatorial meaning. In fact, when the expected value of the Poisson distribution is 1, then Dobinski's formula says that the nth moment equals the number of partitions of a set of size n.

, be independent random variables, with

then we have that,

The upper bound is proved using a standard Chernoff bound.

The lower bound can be proved by noting that

is a the probability that

, which is lower bounded by

is relative entropy (See the entry on bounds on tails of binomial distributions for details). Further noting that

, and computing a lower bound on the unconditional probability gives the result.

Applications of the Poisson distribution can be found in many fields related to counting:[22]

The Poisson distribution arises in connection with Poisson processes. It applies to various phenomena of discrete properties (that is, those that may happen 0, 1, 2, 3, ... times during a given period of time or in a given area) whenever the probability of the phenomenon happening is constant in time or space. Examples of events that may be modelled as a Poisson distribution include:

Gallagher in 1976 showed that the counts of prime numbers in short intervals obey a Poisson distribution provided a certain version of an unproved conjecture of Hardy and Littlewood is true.[26] 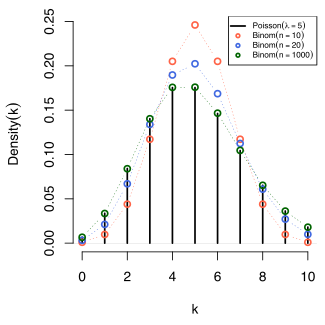 The rate of an event is related to the probability of an event occurring in some small subinterval (of time, space or otherwise). In the case of Poisson distribution, one assumes that there exists a small enough subinterval for which the probability of an event occurring twice is "negligible". With this assumption one can derive the Poisson distribution from the Binomial one, given only the information of expected number of total events in the whole interval. Indeed let this total number be

. Divide the whole interval into

of equal size, such that

(since we are only interested in very small portions of the interval this assumption is meaningful). This means that the expected number of events in an interval

. Now we assume that the occurrence of an event in the whole interval can be seen as a Bernoulli trial, where the

trial corresponds to looking whether an event happens at the subinterval

. Indeed the expected number of total events in

such trials would be

, the expected number of total events in the whole interval. Hence for each subdivision of the interval we have approximated the occurrence of the event as a Bernoulli process of the form

. As we have noted before we want to consider only very small subintervals. Therefore we take the limit as

In several of the above examples—such as, the number of mutations in a given sequence of DNA—the events being counted are actually the outcomes of discrete trials, and would more precisely be modelled using the binomial distribution, that is

This approximation is sometimes known as the law of rare events,[27] since each of the n individual Bernoulli events rarely occurs. The name may be misleading because the total count of success events in a Poisson process need not be rare if the parameter np is not small. For example, the number of telephone calls to a busy switchboard in one hour follows a Poisson distribution with the events appearing frequent to the operator, but they are rare from the point of view of the average member of the population who is very unlikely to make a call to that switchboard in that hour.{{ safesubst:#invoke:Unsubst||date=__DATE__ |$B= {{#invoke:Category handler|main}}{{#invoke:Category handler|main}}[citation needed] }}

Other applications in science

In a Poisson process, the number of observed occurrences fluctuates about its mean λ with a standard deviation

The correlation of the mean and standard deviation in counting independent discrete occurrences is useful scientifically. By monitoring how the fluctuations vary with the mean signal, one can estimate the contribution of a single occurrence, even if that contribution is too small to be detected directly. For example, the charge e on an electron can be estimated by correlating the magnitude of an electric current with its shot noise. If N electrons pass a point in a given time t on the average, the mean current is

; since the current fluctuations should be of the order

(i.e., the standard deviation of the Poisson process), the charge

can be estimated from the ratio

An everyday example is the graininess that appears as photographs are enlarged; the graininess is due to Poisson fluctuations in the number of reduced silver grains, not to the individual grains themselves. By correlating the graininess with the degree of enlargement, one can estimate the contribution of an individual grain (which is otherwise too small to be seen unaided).{{ safesubst:#invoke:Unsubst||date=__DATE__ |$B= {{#invoke:Category handler|main}}{{#invoke:Category handler|main}}[citation needed] }} Many other molecular applications of Poisson noise have been developed, e.g., estimating the number density of receptor molecules in a cell membrane.

In Causal Set theory the discrete elements of spacetime follow a Poisson distribution in the volume.

A simple algorithm to generate random Poisson-distributed numbers (pseudo-random number sampling) has been given by Knuth (see References below):

While simple, the complexity is linear in the returned value k, which is λ on average. There are many other algorithms to overcome this. Some are given in Ahrens & Dieter, see References below. Also, for large values of λ, there may be numerical stability issues because of the term e−λ. One solution for large values of λ is rejection sampling, another is to use a Gaussian approximation to the Poisson.

Inverse transform sampling is simple and efficient for small values of λ, and requires only one uniform random number u per sample. Cumulative probabilities are examined in turn until one exceeds u.

"This algorithm ... requires expected time proportional to λ as λ→∞. For large λ, round-off errors proliferate, which provides us with another reason for avoiding large values of λ."[31]

Since each observation has expectation λ so does this sample mean. Therefore the maximum likelihood estimate is an unbiased estimator of λ. It is also an efficient estimator, i.e. its estimation variance achieves the Cramér–Rao lower bound (CRLB).{{ safesubst:#invoke:Unsubst||date=__DATE__ |$B= {{#invoke:Category handler|main}}{{#invoke:Category handler|main}}[citation needed] }} Hence it is MVUE. Also it can be proved that the sum (and hence the sample mean as it is a one-to-one function of the sum) is a complete and sufficient statistic for λ.

To prove sufficiency we may use the factorization theorem. Consider partitioning the probability mass function of the joint Poisson distribution for the sample into two parts: one that depends solely on the sample

) and one that depends on the parameter

only through the function

is a sufficient statistic for

Note that the first term,

, depends on the sample only through

We take the derivative of L with respect to λ and compare it to zero:

So λ is the average of the ki values. Obtaining the sign of the second derivative of L at the stationary point will determine what kind of extreme value λ is.

Evaluating the second derivative at the stationary point gives:

which is the negative of n times the reciprocal of the average of the ki. This expression is negative when the average is positive. If this is satisfied, then the stationary point maximizes the probability function.

For completeness, a family of distributions is said to be complete if and only if

. Knowing the distribution we want to investigate, it is easy to see that the statistic is complete.

For this equality to hold, it is obvious that

must be 0. This follows from the fact that none of the other terms will be 0 for all

in the sum and for all possible values of

, and the statistic has been shown to be complete.

is the quantile function of a Gamma distribution with shape parameter n and scale parameter 1.[20][33] This interval is 'exact' in the sense that its coverage probability is never less than the nominal 1 – α.

When quantiles of the Gamma distribution are not available, an accurate approximation to this exact interval has been proposed (based on the Wilson–Hilferty transformation):[34]

For application of these formulae in the same context as above (given a sample of n measured values ki each drawn from a Poisson distribution with mean λ), one would set

In Bayesian inference, the conjugate prior for the rate parameter λ of the Poisson distribution is the gamma distribution.[35] Let

denote that λ is distributed according to the gamma density g parameterized in terms of a shape parameter α and an inverse scale parameter β:

Then, given the same sample of n measured values ki as before, and a prior of Gamma(α, β), the posterior distribution is

in the limit as

The posterior predictive distribution for a single additional observation is a negative binomial distribution,[36] sometimes called a Gamma–Poisson distribution.

is a set of independent random variables from a set of

Poisson distributions, each with a parameter

, and we would like to estimate these parameters. Then, Clevenson and Zidek[37] show that under the normalized squared error loss

, then, similar as in Stein's famous example for the Normal means, the MLE estimator

In this case, a family of minimax estimators is given for any

A simple way to generate a bivariate Poisson distribution

. The probability function of the bivariate Poisson distribution is