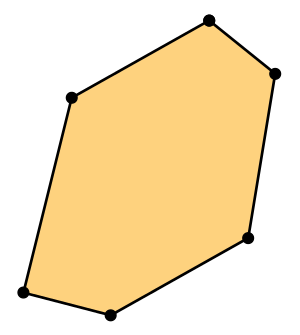 Some theories further generalize the idea to include such objects as unbounded (apeirotopes and tessellations), decompositions or tilings of curved manifolds such as spherical polyhedra, and set-theoretic abstract polytopes.

Polytopes in more than three dimensions were first discovered by Ludwig Schläfli. The term "polytop" was coined by the mathematician Hoppe, writing in German, and was introduced to English mathematicians in its present form by Alicia Boole Stott.

The term polytope is nowadays a broad term that covers a wide class of objects, and different definitions are attested in mathematical literature. Many of these definitions are not equivalent, resulting in different sets of objects being called polytopes. They represent different approaches to generalizing the convex polytopes to include other objects with similar properties.

The original approach broadly followed by Ludwig Schläfli, Thorold Gosset and others begins with the extension by analogy into four or more dimensions, of the idea of a polygon and polyhedron respectively in two and three dimensions.[1]

Attempts to generalise the Euler characteristic of polyhedra to higher-dimensional polytopes led to the development of topology and the treatment of a decomposition or CW-complex as analogous to a polytope.[2] Similarly, a polytope may be regarded as a tessellation or decomposition of some given manifold. Convex polytopes are equivalent to tilings of the sphere, while others may be tilings of other elliptic, flat or toroidal surfaces – see elliptic tiling and toroidal polyhedron.

A more recent approach defines a polytope as a set of points that admits a simplicial decomposition. In this definition, a polytope is the union of finitely many simplices, with the additional property that, for any two simplices that have a nonempty intersection, their intersection is a vertex, edge, or higher dimensional face of the two. However this definition does not allow star polytopes with interior structures, and so is restricted to certain areas of mathematics.

Some authors use polytope and polyhedron in a different sense, as follows: a polyhedron is the generic object in any dimension (which is referred to as polytope on this Wikipedia article) and polytope means a bounded polyhedron.[3] This terminology is typically used for polytopes and polyhedra that are convex. With this terminology, a convex polyhedron is the intersection of a finite number of halfspaces (it is defined by its sides) while a convex polytope is the convex hull of a finite number of points (it is defined by its vertices).

The elements of a polytope are its vertices, edges, faces, cells and so on. Terminology for these is not fully consistent across different authors. For example some authors use face to refer to an (n − 1)-dimensional element while others use face to denote a 2-face specifically. Authors may use j-face or j-facet to indicate an element of j dimensions. Some use edge to refer to a ridge, while H. S. M. Coxeter uses cell to denote an (n − 1)-dimensional element.

The terms adopted in this article are given in the table below:

Classes of regular polytope in any number n of dimensions include:

A few dimensionalities include regular figures with fivefold symmetries and/or non-convex stars, and in two dimensions there are infinitely many regular polygons, but in general there are few other regular polytopes.[1]

In three dimensions the regular polyhedra include the five convex Platonic solids, which have been known and admired for their beauty since antiquity, and the four star Kepler-Poinsot polyhedra.

{{#invoke:main|main}} A non-convex polytope may be self-intersecting; this class of polytopes include the star polytopes. Some regular polytopes are stars.[1]

Generalisations of a polytope

Not all manifolds are finite. Where a polytope is understood as a tiling or decomposition of a manifold, this idea may be extended to infinite manifolds. plane tilings, space-filling (honeycombs) and hyperbolic tilings are in this sense polytopes, and are sometimes called apeirotopes because they have infinitely many cells.

Among these, there are regular forms including the regular skew polyhedra and the infinite series of tilings represented by the regular apeirogon, square tiling, cubic honeycomb, and so on.

The theory of abstract polytopes attempts to detach polytopes from the space containing them, considering their purely combinatorial properties. This allows the definition of the term to be extended to include objects for which it is difficult to define an intuitive underlying space, such as the 11-cell.

An abstract polytope is a partially ordered set of elements or members, which obeys certain rules. It is a purely algebraic structure, and the theory was developed in order to avoid some of the issues which make it difficult to reconcile the various geometric classes within a consistent mathematical framework. A geometric polytope is said to be a realization in some real space of the associated abstract polytope.

For an abstract polytope, this simply reverses the ordering of the set. This reversal is seen in the Schläfli symbols for regular polytopes, where the symbol for the dual polytope is simply the reverse of the original. For example {4, 3, 3} is dual to {3, 3, 4}.

In the case of a geometric polytope, some geometric rule for dualising is necessary, see for example the rules described for dual polyhedra. Depending on circumstance, the dual figure may or may not be another geometric polytope.[4]

If the dual is reversed, then the original polytope is recovered. Thus, polytopes exist in dual pairs.

The 5-cell (4-simplex) is self-dual with 5 vertices and 5 tetrahedral cells.

If a polytope has the same number of vertices as facets, of edges as ridges, and so forth, and the same connectivities, then the dual figure will be identical to the original and the polytope is self-dual.

Some common self-dual polytopes include:

Polygons and polyhedra have been known since ancient times.

An early hint of higher dimensions came in 1827 when Möbius discovered that two mirror-image solids can be superimposed by rotating one of them through a fourth mathematical dimension. By the 1850s, a handful of other mathematicians such as Cayley and Grassman had considered higher dimensions. Ludwig Schläfli was the first of these to consider analogues of polygons and polyhedra in such higher spaces. In 1852 he described the six convex regular 4-polytopes, but his work was not published until 1901, six years after his death. By 1854, Bernhard Riemann's Habilitationsschrift had firmly established the geometry of higher dimensions, and thus the concept of n-dimensional polytopes was made acceptable. Schläfli's polytopes were rediscovered many times in the following decades, even during his lifetime.

In 1882 Hoppe, writing in German, coined the word polytop to refer to this more general concept of polygons and polyhedra. In due course Alicia Boole Stott, the daughter of logician George Boole, introduced polytope into the English language.[1]

In 1895, Thorold Gosset not only rediscovered Schläfli's regular polytopes, but also investigated the ideas of semiregular polytopes and space-filling tessellations in higher dimensions. Polytopes were also studied in non-Euclidean spaces such as hyperbolic space.

An important milestone was reached in 1948 with H. S. M. Coxeter's book Regular Polytopes, summarizing work to date and adding findings of his own.

Meanwhile the topological idea of the piecewise decomposition of a manifold into a CW-complex led to the treatment of such decompositions as polytopes. Branko Grünbaum published his influential work on Convex Polytopes in 1967.

The conceptual issues raised by complex polytopes, duality and other phenomena led Grünbaum and others to the more general study of abstract combinatorial properties relating vertices, edges, faces and so on. A related idea was that of incidence complexes, which studied the incidence or connection of the various elements with one another. These developments led eventually to the theory of abstract polytopes as partially ordered sets, or posets, of such elements. McMullen and Schulte published their book Abstract Regular Polytopes in 2002.

Enumerating the uniform polytopes, convex and nonconvex, in four or more dimensions remains an outstanding problem.

In modern times, polytopes and related concepts have found many important applications in fields as diverse as computer graphics, optimization, search engines, cosmology, quantum mechanics and numerous other fields.

In the study of optimization, linear programming studies the maxima and minima of linear functions constricted to the boundary of an n-dimensional polytope.

In linear programming, polytopes occur in the use of Generalized barycentric coordinates and Slack variables.