Dipole radiation of a dipole vertically in the page showing electric field strength (colour) and Poynting vector (arrows) in the plane of the page.

{{#invoke: Sidebar | collapsible }} In physics, the Poynting vector represents the directional energy flux density (the rate of energy transfer per unit area, in units of watts per square metre (W·m−2)) of an electromagnetic field. It is named after its inventor John Henry Poynting. Oliver Heaviside[1] and Nikolay Umov independently co-invented the Poynting vector.Template:Cn

In Poynting's original paper and in many textbooks, it is usually denoted by S or N, and defined as:[2][3]

which is often called the Abraham form; where E is the electric field and H the magnetic field.[4][5] (All bold letters represent vectors.)

Occasionally an alternative definition in terms of electric field E and the magnetic flux density B is used. It is even possible to combine the displacement field D with the magnetic flux density B to get the Minkowski form of the Poynting vector, or use D and H to construct another.[6] The choice has been controversial: Pfeifer et al.[7] summarize and to a certain extent resolve the century-long dispute between proponents of the Abraham and Minkowski forms.

The Poynting vector represents the particular case of an energy flux vector for electromagnetic energy. However, any type of energy has its direction of movement in space, as well as its density, so energy flux vectors can be defined for other types of energy as well, e.g., for mechanical energy. The Umov–Poynting vector[8] discovered by Nikolay Umov in 1874 describes energy flux in liquid and elastic media in a completely generalized view.

The Poynting vector appears in Poynting's theorem (see this article for the derivation of the theorem and vector), an energy-conservation law,[5]

where Jf is the current density of free charges and u is the electromagnetic energy density,

The first term in the right-hand side represents the net electromagnetic energy flow into a small volume, while the second term represents the subtracted portion of the work done by free electrical currents that are not necessarily converted into electromagnetic energy (dissipation, heat). In this definition, bound electrical currents are not included in this term, and instead contribute to S and u.

Note that u can only be given if linear, nondispersive and uniform materials are involved, i.e., if the constitutive relations can be written as

where ε and μ are constants (which depend on the material through which the energy flows), called the permittivity and permeability, respectively, of the material.[5]

In principle, this limits Poynting's theorem in this form to fields in vacuum. A generalization to dispersive materials is possible under certain circumstances at the cost of additional terms and the loss of their clear physical interpretation.[5]

The Poynting vector is usually interpreted as an energy flux, but this is only strictly correct for electromagnetic radiation. The more general case is described by Poynting's theorem above, where it occurs as a divergence, which means that it can only describe the change of energy density in space, rather than the flow.

Invariance to adding a curl of a field

since the divergence of the curl term is zero: ∇ ⋅ (∇ × F) = 0 for an arbitrary field F (see Vector calculus identities).

This property is used in quasi-electrostatic regimes to describe for instance energy propagating through waves in piezoelectric materials. In such cases magnetic fields are negligible and a local flux of energy can be defined based on electrical quantities only. In the general case we can express the divergence of the Poynting vector as:

The fourth of the Maxwell's equations writes:

is the current density due to free charges. In dielectric materials it reduces to:

A new "magnetic free" Poynting vector leading to the same divergence can be defined as:

where V is the electrostatic potential.

A demonstration in the case of the parallel-plate capacitor that both S and S′, although being orthogonal, lead to the same overall energy balance is provided by Bondar & Bastien.[9]

It is often thought that using a different vector than the classical Poynting vector will lead to inconsistencies in a relativistic description of electromagnetic fields where energy and momentum should be defined locally in terms of the stress–energy tensor.{{ safesubst:#invoke:Unsubst||date=__DATE__ |$B= {{#invoke:Category handler|main}}{{#invoke:Category handler|main}}[citation needed] }}

In some cases, it may be more appropriate to define the Poynting vector S as

where μ0 is the magnetic constant. It can be derived directly from Maxwell's equations in terms of total charge and current and the Lorentz force law only.

The corresponding form of Poynting's theorem is

where ε0 is the electric constant.

The two alternative definitions of the Poynting vector are equivalent in vacuum or in non-magnetic materials, where B = μ0H. In all other cases, they differ in that

assumptions about any material possibly present can be completely avoided, and Poynting's vector as well as the theorem in this definition are universally valid, in vacuum as in all kinds of material. This is especially true for the electromagnetic energy density, in contrast to the case above.[10]

For time-periodic sinusoidal electromagnetic fields, the average power flow per unit time is often more useful, and can be found by treating the electric and magnetic fields as complex vectors as follows (star * denotes the complex conjugate):

The average over time is given as

The second term is a sinusoidal curve

and its average is zero, giving

In a coaxial cable

Poynting vector in a coaxial cable, shown in red

where E0 is the peak value of the electric field and c is the speed of light in free space. This time-averaged value is also called the irradiance or intensity I.

In an electromagnetic plane wave, E and B are always perpendicular to each other and the direction of propagation. Moreover, their amplitudes are related according to

and their time and position dependences are

where ω is the frequency of the wave and k is wave vector. The time-dependent and position magnitude of the Poynting vector is then

It will be appreciated that quantitatively the Poynting vector is evaluated only from a prior knowledge of the distribution of electric and magnetic fields, which are calculated by applying boundary conditions to a particular set of physical circumstances, for example a dipole antenna. Therefore the E and H field distributions form the primary object of any analysis, while the Poynting vector remains an interesting by-product.

The density of the linear momentum of the electromagnetic field is S/c2 (the speed of light in free space). The radiation pressure exerted by an electromagnetic wave on the surface of a target is given by:

the time-averaged intensity above. 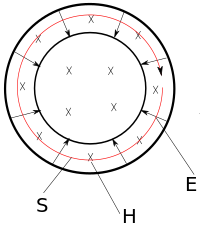 The consideration of the Poynting vector in static fields shows the relativistic nature of the Maxwell equations and allows a better understanding of the magnetic component of the Lorentz force, q(v × B). To illustrate, the accompanying picture is considered, which describes the Poynting vector in a cylindrical capacitor, which is located in an H field (pointing into the page) generated by a permanent magnet. Although there are only static electric and magnetic fields, the calculation of the Poynting vector produces a clockwise circular flow of electromagnetic energy, with no beginning or end.

While the circulating energy flow may seem nonsensical or paradoxical, it proves to be absolutely necessary to maintain conservation of momentum. Momentum density is proportional to energy flow density, so the circulating flow of energy contains an angular momentum.[14] This is the cause of the magnetic component of the Lorentz force which occurs when the capacitor is discharged. During discharge, the angular momentum contained in the energy flow is depleted as it is transferred to the charges of the discharge current crossing the magnetic field.