In mathematics, a projection is a mapping of a set (or other mathematical structure) into a subset (or sub-structure), which is equal to its square for mapping composition (or, in other words, which is idempotent). The restriction to a subspace of a projection is also called a projection, even if the idempotence property is lost. An everyday example of a projection is the casting of shadows onto a plane (paper sheet). The projection of a point is its shadow on the paper sheet. The shadow of a point on the paper sheet is this point itself (idempotence). The shadow of a three-dimensional sphere is a circle. Originally, the notion of projection was introduced in Euclidean geometry to denote the projection of the Euclidean space of three dimensions onto a plane in it, like the shadow example. The two main projections of this kind are:

The concept of projection in mathematics is a very old one, most likely having its roots in the phenomenon of the shadows cast by real world objects on the ground. This rudimentary idea was refined and abstracted, first in a geometric context and later in other branches of mathematics. Over time differing versions of the concept developed, but today, in a sufficiently abstract setting, we can unify these variations.

In cartography, a map projection is a map of a part of the surface of the Earth onto a plane, which, in some cases, but not always, is the restriction of a projection in the above meaning. The 3D projections are also at the basis of the theory of perspective. 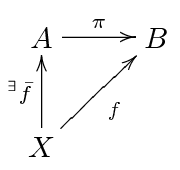 Commutativity of this diagram is the universality of projection π, for any map f and set X.

In an abstract setting we can generally say that a projection is a mapping of a set (or of a mathematical structure) which is idempotent, which means that a projection is equal to its composition with itself. A projection may also refer to a mapping which has a left inverse. Both notions are strongly related, as follows. Let p be an idempotent map from a set E into itself (thus p∘p = p) and F = p(E) be the image of p. If we denote by π the map p viewed as a map from E onto F and by i the injection of F into E, then we have i∘π = IdF. Conversely, i∘π = IdF implies that π∘i is idempotent.

The original notion of projection has been extended or generalized to various mathematical situations, frequently, but not always, related to geometry, for example: