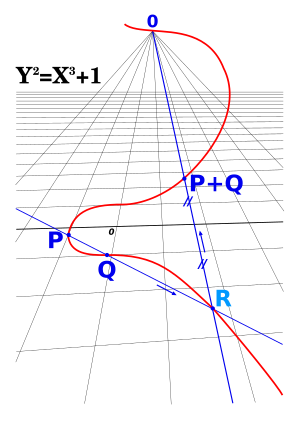 An elliptic curve is a smooth projective curve of genus one.

If X is a projective variety defined by a homogeneous prime ideal I, then the quotient ring

is called the homogeneous coordinate ring of X. The ring comes with the Hilbert polynomial P, an important invariant (depending on embedding) of X. The degree of P is the topological dimension r of X and its leading coefficient times r! is the degree of the variety X. The arithmetic genus of X is (−1)r (P(0) − 1) when X is smooth. For example, the homogeneous coordinate ring of Pn is

and its Hilbert polynomial is

; its arithmetic genus is zero.

of X, the set of isomorphism classes of line bundles on X. It is isomorphic to

. It is an intrinsic notion (independent of embedding). For example, the Picard group of Pn is isomorphic to Z via the degree map. The kernel of

is called the Jacobian variety of X. The Jacobian of a (smooth) curve plays an important role in the study of the curve.

The classification program, classical and modern, naturally leads to the construction of moduli of projective varieties.[1] A Hilbert scheme, which is a projective scheme, is used to parametrize closed subschemes of Pn with the prescribed Hilbert polynomial. For example, a Grassmannian

is a Hilbert scheme with the specific Hilbert polynomial. The geometric invariant theory offers another approach. The classical approaches include the Teichmüller space and Chow varieties.

For complex projective varieties, there is a marriage of algebraic and complex-analytic approaches. Chow's theorem says that a subset of the projective space is the zero-locus of a family of holomorphic functions if and only if it is the zero-locus of homogeneous polynomials. (A corollary of this is that a "compact" complex space admits at most one variety structure.) The GAGA says that the theory of holomorphic vector bundles (more generally coherent analytic sheaves) on X coincide with that of algebraic vector bundles.

It follows from this that the fibered product of projective varieties is also projective.

is more complicated; it is a matter of polarization. (cf. Lefschetz's embedding theorem.) By the p-adic uniformization, the case

has a p-adic analog.

Let k be an algebraically closed field. Given a homogeneous prime ideal P of

, let X be a subset of Pn(k) consisting of all roots of polynomials in P.[6] Here we show X admits a structure of variety by showing locally it is an affine variety.[7] Let

i.e., R is the homogeneous coordinate ring of X. The localization of R with respect to nonzero homogeneous elements is graded; let k(X) denote its zeroth piece. It is the function field of X. Explicitly, k(X) consists of zero and f/g, with f, g homogeneous of the same degree, inside the field of fractions of R. For each x in X, let

be the subring consisting of zero and f/g with g(x) ≠ 0; it is a local ring.

on X by: for each Zariski open subset U,

at x in X is then

.[8] We have thus constructed the locally ringed space

. We shall show it is locally an affine variety. For that, it is enough to show:

are affine varieties. For simplicity, we consider only the case i = 0. Let P′ be the kernel of

and let X′ be the zero-locus of P′ in kn. X′ is an affine variety. We then verify

is an isomorphism of ringed spaces. More specifically, we check:

(i) φ is a homeomorphism (by looking at closed subsets.)
(ii)

The discussion in the preceding section applies in particular to the projective space Pn(k); i.e., it is a union of (n + 1) copies of the affine n-space kn in such a way ringed space structures are compatible. This motivates the following definition:[9] for any ring A we let

be the scheme that is the union of

in such a way the variables match up as expected. The set of closed points of

is then the projective space Pn(k) in the usual sense.

An equivalent but streamlined construction is given by the Proj construction, which is an analog of the spectrum of a ring, denoted "Spec", which defines an affine scheme. For example, if A is a ring, then

If R is a quotient of

by a homogeneous ideal, then the canonical surjection induces the closed immersion

In fact, one has the following: every closed subscheme of

corresponds bijectively to a homogeneous ideal I of

that is saturated; i.e.,

.[10] This fact may be considered as a refined version of projective Nullstellensatz.

We can give a coordinate-free analog of the above. Namely, given a finite-dimensional vector space V over k, we let

is the symmetric algebra of

.[11] It is the projectivization of V; i.e., it parametrizes lines in V. There is a canonical surjective map

, which is defined using the chart described above.[12] One important use of the construction is this (for more of this see below). A divisor D on a projective variety X corresponds to a line bundle L. One then set

it is called the complete linear system of D.

For any noetherian scheme S, we let

is the twisting sheaf of Serre on

denote the pullback of

for the canonical map

followed by the projection to S.

In general, a line bundle (or invertible sheaf)

for some n so that

under the closed immersion of X into a projective space is very ample. That "projective" implies "proper" is more difficult: the main theorem of elimination theory.

In general, a line bundle is called ample if some power of it is very ample. Thus, a variety is projective if and only if it is complete and it admis an ample line bundle. An issue of an embedding of a variety into a projective space is discussed in greater details in the following section.

We begin with a preliminary on a morphism into a projective space.[14] Let X be a scheme over a ring A. Suppose there is a morphism

Then, along this map,

pulls-back to a line bundle L on X. L is then generated by the global sections

. They define a morphism

be the complements of

are the standard open affine chart described above.) Let

. It is then immediate that L is isomorphic to

is a closed immersion if and only if

be the sheaf on X associated with

the total ring of fractions of

. A global section of

(* means multiplicative group) is called a Cartier divisor on X. The notion actually adds nothing new: there is the canonical bijection

be a coherent sheaf on it. Let

be the closed immersion. Then the cohomology of X can be computed from that of the projective space:

where in the right-hand side

is viewed as a sheaf on the projective space by extension by zero.[16] One can then deduce the following results due to Serre: let

Indeed, we can assume X is the projective space by the early discussion. Then this can be seen by a direct computation for

n any integer, and the general case reduces to this case without much difficulty.[17]

is coherent. This is a special case of a more general case: f proper. But the general case follows from the projective case with the aid of Chow's lemma.

It is a feature of sheaf cohomology on a noetherian topological space that Hi vanishes for i strictly greater than the dimension of the space. Thus, in view of the above discussion, the quantity

is a well-defined integer. It is called the Euler characteristic of

all vanish for sufficiently large n. One can then show

for some polynomial P over rational numbers.[18] Applying this procedure to the structure sheaf

, one recovers the Hilbert polynomial of X. In particular, if X is irreducible and has dimension r, the arithmetic genus of X is given by

which is manifestly intrinsic; i.e., independent of the embedding.

Let X be a smooth projective variety where all of its irreducible components have dimension n. Then one has the following version of the Serre duality: for any locally free sheaf

where the superscript prime refers to the dual space, ωX is the canonical sheaf and

is the dual sheaf of

Now, assume X is a curve (but still projective and nonsingular). Then H2 and higher vanish for dimensional reason and the space of the global sections of the structure sheaf is one-dimensional. Thus the arithmetic genus of X is the dimension of

The Serre duality is also a key ingredient in the proof of the Riemann–Roch theorem. Since X is smooth, there is an isomorphism of groups

from the group of (Weil) divisors modulo principal divisors to the group of isomorphism classes of line bundles. A divisor corresponding to ωX is called the canonical divisor and is denoted by K. Let l(D) be the dimension of

. Then the Riemann–Roch theorem states: if g is a genus of X,

for any divisor D on X. By the Serre duality, this is the same as:

which can be readily proved.[19]

For complex smooth projecive varieties, one of fundamental results is the Kodaira vanishing theorem, which states the following:[20]

an ample line bundle. Then

The Kodaira vanishing in general fails for a smooth projective variety in positive characteristic.

over S such that, for any S-scheme T,

to give a T-point of

is the same as to give a closed subscheme of

that corresponds to the identity map

is called the universal family.

One of the fundamental results here is Chow's theorem, which states that every analytic subvariety of a complex projective space is algebraic. The theorem may be interpreted to saying that a holomorphic function satisfying certain growth condition is necessarily algebraic: "projective" provides this growth condition. One can deduce from the theorem the following:

Chow's theorem is an instance of GAGA. Its main theorem due to Serre states:

are isomorphisms for all i and all coherent sheaves

In particular, the theorem gives a proof of Chow's theorem.