In relativity, proper time is the elapsed time between two events as measured by a clock that passes through both events. The proper time depends not only on the events but also on the motion of the clock between the events. An accelerated clock will measure a smaller elapsed time between two events than that measured by a non-accelerated (inertial) clock between the same two events. The twin paradox is an example of this effect. 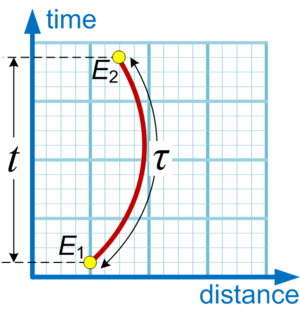 By contrast, coordinate time is the time between two events as measured by a distant observer using that observer's own method of assigning a time to an event. In the special case of an inertial observer in special relativity, the time is measured using the observer's clock and the observer's definition of simultaneity.

The concept of proper time was introduced by Hermann Minkowski in 1908,[1] and is a feature of Minkowski diagrams.

The formal definition of proper time involves describing the path through spacetime that represents a clock, observer, or test particle, and the metric structure of that spacetime. Proper time is the pseudo-Riemannian arc length of world lines in four-dimensional spacetime.

In special relativity, proper time can be defined as

where v(t) is the coordinate speed at coordinate time t, and x, y, and z are Cartesian spatial coordinates.

If t, x, y, and z are all parameterised by a parameter λ, this can be written as

In differential form it can be written as the line integral

where P is the path of the clock in spacetime.

To make things even easier, inertial motion in special relativity is where the spatial coordinates change at a constant rate with respect to the temporal coordinate. This further simplifies the proper time equation to

where Δ means "the change in" between two events.

The special relativity equations are special cases of the general case that follows.

Using tensor calculus, proper time is more rigorously defined in general relativity as follows: Given a pseudo-Riemannian manifold with a coordinate system

and equipped with a metric tensor

(Note: The Einstein summation convention is used in the above. The expression AμBμ denotes A0B0 + A1B1 + A2B2 + A3B3, and the μ in Bμ denotes an index, not a power.)

This is referred to as the line element of the spacetime. s may be spacelike, lightlike, or timelike. Spacelike paths cannot be physically traveled (as they require moving faster than light). Lightlike paths can only be followed by light beams, for which there is no passage of proper time. Only timelike paths can be traveled by massive objects, in which case the invariant interval becomes the proper time

. So for our purposes

. After that, take the line integral of each side to get

as described by the first equation.

This spacetime and mapping are described with the Minkowski metric:

(Note: The +--- metric signature is used in this article so that

will always be positive definite for timelike paths.)

for 10 years of coordinate time. The proper time for A is then

So we find that being "at rest" in a special relativity coordinate system means that proper time and coordinate time are the same.

, the proper time experienced is

which is the SR time dilation formula.

An observer rotating around another inertial observer is in an accelerated frame of reference. For such an observer, the incremental (

) form of the proper time equation is needed, along with a parameterized description of the path being taken, as shown below.

is the current coordinate time. When r and

, the proper time experienced will be

As v=rω for a rotating observer, this result is as expected given the time dilation formula above, and shows the general application of the integral form of the proper time formula.

The difference between SR and general relativity (GR) is that in GR you can use any metric which is a solution of the Einstein field equations, not just the Minkowski metric. Because inertial motion in curved spacetimes lacks the simple expression it has in SR, the line integral form of the proper time equation must always be used.

An appropriate coordinate conversion done against the Minkowski metric creates coordinates where an object on a rotating disk stays in the same spatial coordinate position. The new coordinates are

The t and z coordinates remain unchanged. In this new coordinate system, the incremental proper time equation is

With r, θ, and z being constant over time, this simplifies to

which is the same as in Example 2.

Now let there be an object off of the rotating disk and at inertial rest with respect to the center of the disk and at a distance of R from it. This object has a coordinate motion described by dθ = -ω dt, which describes the inertially at-rest object of counter-rotating in the view of the rotating observer. Now the proper time equation becomes

So for the inertial at-rest observer, coordinate time and proper time are once again found to pass at the same rate, as expected and required for the internal self-consistency of relativity theory.[2]

Example 4: The Schwarzschild solution — time on the Earth

The Schwarzschild solution has an incremental proper time equation of

M is the mass of the Earth,
G is the gravitational constant.

To demonstrate the use of the proper time relationship, several sub-examples involving the Earth will be used here. The use of the Schwarzschild solution for the Earth is not entirely correct for the following reasons:

(meaning that we are neither moving up or down or along the surface of the Earth). In this case, the Schwarzschild solution proper time equation becomes

. Then using the polar radius of the Earth as the radial coordinate (or

meters), we find that

At the equator, the radius of the Earth is r = 6,378,137 meters. In addition, the rotation of the Earth needs to be taken into account. This imparts on an observer an angular velocity of

. The proper time equation then produces

This should have been the same as the previous result, but as noted above the Earth is not spherical as assumed by the Schwarzschild solution. Even so this demonstrates how the proper time equation is used.