In mathematics and theoretical physics, a pseudo-Euclidean space is a finite-dimensional [[real coordinate space|real Template:Mvar-space]] together with a non-degenerate indefinite quadratic form, called the magnitude of a vector. Such a quadratic form can, after a suitable change of coordinates, be written as

As with the term Euclidean space, pseudo-Euclidean space may refer to either an affine space or a vector space (see point–vector distinction) over real numbers.

The geometry of a pseudo-Euclidean space is consistent in spite of a breakdown of the some properties of Euclidean space; most notably that it is not a metric space as explained below. Though, its affine structure provides that concepts of line, plane and, generally, of an affine subspace (flat), can be used without modifications, as well as line segments.

The magnitude Template:Mvar corresponds to the square of a vector (or its norm) in Euclidean case. To define the vector norm (and distance) in an invariant manner, one has to get square roots of magnitudes, which leads to possibly imaginary distances; see square root of negative numbers. But even for a triangle with positive magnitudes of all three sides (whose square roots are real and positive), the triangle inequality is not necessarily true.

That's why terms norm and distance are avoided in pseudo-Euclidean geometry, replaced with magnitude and interval respectively.

Though, for a curve whose tangent vectors all have the same sign of magnitude, the arc length is defined. It has important applications: see proper time, for example. 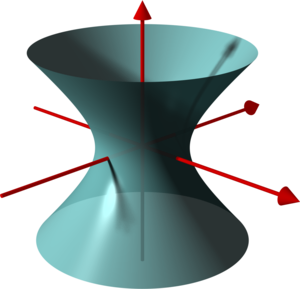 The rotations group of such space is indefinite orthogonal group O(q), also denoted as O(k, n − k) without a reference to particular quadratic form.[2] Such "rotations" preserve the form Template:Mvar and, hence, the magnitude of each vector whether is it positive, zero, or negative.

The quadratic form can be expressed in terms of the bilinear form:

{{safesubst:#invoke:anchor|main}}The standard basis of the real Template:Mvar-space is orthogonal. There are no orthonormal bases in a pseudo-Euclidean space because there is no vector norm.

{{safesubst:#invoke:anchor|main}} One of most jarring properties (for a Euclidean intuition) of pseudo-Euclidean vectors and flats is their orthogonality. When two non-zero Euclidean vectors are perpendicular, they are certainly not collinear. Any Euclidean linear subspace intersects with its orthogonal complement only by the {0} subspace. But the definition from the previous subsection immediately implies that any vector ν of zero magnitude is perpendicular to itself. Hence, for the 1-subspace N = [[linear span|Template:Langle ν Template:Rangle]] generated by such non-zero vector, its orthogonal complement N⊥ will be a superspace of Template:Mvar.

The formal definition of the orthogonal complement of a vector subspace in a pseudo-Euclidean space gives a perfectly well-defined result which satisfies the equality dim U + dim U⊥ = n due to the magnitude form's non-degeneracy. It is just the condition

which can be broken if the subspace Template:Mvar contains a null direction.[5] While subspaces form a distributive lattice, as in any vector space, they do not form a Boolean algebra with this ⊥ operation, as in inner product spaces.

Such subspaces can have up to min(k, n − k) dimensions.

For a (positive) Euclidean Template:Mvar-subspace its orthogonal complement is a (n − k)-dimensional negative "Euclidean" subspace, and vice versa. Generally, for a (d+ + d− + d0)-dimensional subspace Template:Mvar consisting of d+ positive and d− negative dimensions (see Sylvester's law of inertia for clarification), its orthogonal "complement" U⊥ has (k − d+ − d0) positive and (n − k − d− − d0) negative dimensions, while the rest d0 ones are degenerate and form the U ∩ U⊥ intersection.

The parallelogram law takes the form

Using the square of the sum identity, for an arbitrary triangle one can express the magnitude of the third side from magnitudes of two sides and their bilinear form product:

This demonstrates that, for perpendicular vectors, a pseudo-Euclidean analog of the Pythagorean theorem holds: 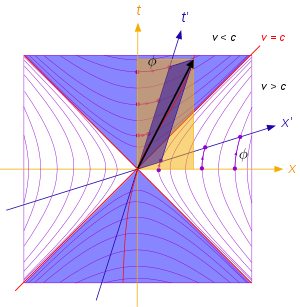 Generally, absolute value |Template:Langlex, yTemplate:Rangle| of the bilinear form on two vectors may be greater than Template:Sqrt, equal to it, or less. This causes similar problems with definition of angle (see dot product#Geometric definition) as appeared above for distances. If k = 1 (only one positive term in Template:Mvar), then for positive-magnitude vectors:

which permits to define hyperbolic angle, an analog of angle between these vectors through inverse hyperbolic cosine:

It corresponds to the distance on a (n − 1)-dimensional hyperbolic space. This is known as rapidity in the context of theory of relativity discussed below. Unlike Euclidean angle, it takes values from Template:Closed-open and equals to 0 for antiparallel vectors.

There is no reasonable definition of the angle between a null vector and another vector (either null or non-null).

Like Euclidean spaces, a pseudo-Euclidean space possesses geometric algebra. Unlike properties above, where replacement of Template:Mvar to −q changed numbers but not geometry, the sign reversal of the magnitude form actually alters Cℓ, so for example Cℓ1,2(R) and Cℓ2,1(R) are not isomorphic.

Just like over any vector space, there are pseudo-Euclidean tensors. Like with a Euclidean structure, there are raising and lowering indices operators but, unlike the case with Euclidean tensors, there is no bases where these operations do not change values of components. If there is a vector Template:Mvar, the corresponding covariant vector is:

and with the standard-form

A very important pseudo-Euclidean space is Minkowski space, which is the mathematical setting in which Albert Einstein's theory of special relativity is conveniently formulated. For Minkowski space, n = 4 and k = 3[7] so that

The geometry associated with this pseudo-metric was investigated by Poincaré. Its rotation group is the Lorentz group. The Poincaré group includes also translations and plays the same role as Euclidean groups of ordinary Euclidean spaces.

Another pseudo-Euclidean space is the plane z = x + y j consisting of split-complex numbers, equipped with the quadratic form

This is the simplest case of a pseudo-Euclidean space (n = 2, k = 1) and the only one where the null cone dissects the space to four open sets. The group SO+(1, 1) consists of so named hyperbolic rotations.