The general quadratic equation is

Derivation of the formula

Once a student understands how to complete the square, they can then derive the quadratic formula.[1][2] For that reason, the derivation is sometimes left as an exercise for the student, who can thereby experience rediscovery of this important formula.[3][4] The explicit derivation will now be carried out.

Divide the quadratic equation by a, which is allowed because a is non-zero:

Subtract c/a from both sides of the equation, transforming it into the form

The quadratic equation is now in a form to which the method of completing the square can be applied. Thus, add a constant to both sides of the equation such that the left hand side becomes a complete square:

Accordingly, after rearranging the terms on the right hand side to have a common denominator, we obtain this:

The square has thus been completed. Taking the square root of both sides yields the following equation:

The plus-minus symbol "±" indicates that both

are solutions of the quadratic equation.[5] There are many alternatives of this derivation with minor differences, mostly concerning the manipulation of

Some sources, particularly older ones, use alternative parameterizations of the quadratic equation such as

,[7] where b has a magnitude one half of the more common one. These result in slightly different forms for the solution, but are otherwise equivalent. 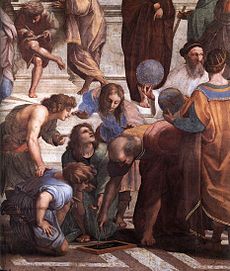 Euclid in Raphael's School of Athens

The Indian mathematician Brahmagupta (597–668 AD) explicitly described the quadratic formula in his treatise Brāhmasphuṭasiddhānta published in 628 AD,[14] but written in words instead of symbols.[15] His solution of the quadratic equation

The 9th century Persian mathematician al-Khwārizmī, influenced by earlier Greek and Indian mathematicians, solved quadratic equations algebraically.[17] The quadratic formula covering all cases was first obtained by Simon Stevin in 1594.[18] In 1637 René Descartes published La Géométrie containing the quadratic formula in the form we know today. The first appearance of the general solution in the modern mathematical literature appeared in an 1896 paper by Henry Heaton.[19]

Importance of this solution

Completing the square also allows for the solution of all quadratics, as it is mathematically equivalent, but the quadratic formula gives a result without the need for so much algebraic manipulation. As such, it is generally considered more practical to use the formula.[23][27][28][29] Completing the square is very useful for other purposes, such as putting the equations for conic sections into standard form.[30]

A number of alternative derivations of the quadratic formula can be found in the literature. These derivations either (a) are simpler than the standard completing the square method, (b) represent interesting applications of other frequently used techniques in algebra, or (c) offer insight into other areas of mathematics.

Alternate method of completing the square

The great majority of algebra texts published over the last several decades teach completing the square using the sequence presented earlier: (1) divide each side by a, (2) rearrange, (3) then add the square of one-half of b/a.

As pointed out by Larry Hoehn in 1975, completing the square can be accomplished by a different sequence that leads to a simpler sequence of intermediate terms: (1) multiply each side by 4a, (2) rearrange, (3) then add

In other words, the quadratic formula can be derived as follows:

This actually represents an ancient derivation of the quadratic formula, and was known to the Hindus at least as far back as 1025 AD.[32] Compared with the derivation in standard usage, this alternate derivation is shorter, involves fewer computations with literal coefficients, avoids fractions until the last step, has simpler expressions, and uses simpler math. As Hoehn states, "it is easier 'to add the square of b' than it is 'to add the square of half the coefficient of the x term'".[31]

Another technique is solution by substitution. In this technique, we substitute

into the quadratic to get:

Expanding the result and then collecting the powers of

We have not yet imposed a second condition on

, so we now choose m so that the middle term vanishes. That is,

. Subtracting the constant term from both sides of the equation (to move it to the right hand side) and then dividing by a gives:

Let the roots of the standard quadratic equation be

. At this point, we recall the identity:

Taking square root on both sides, we get

Since the coefficient a ≠ 0, we can divide the standard equation by a to obtain a quadratic polynomial having the same roots. Namely,

, and the product of those roots is given by

Hence the identity can be rewritten as:

and if we instead take

then we calculate that

Combining these results by using the standard shorthand, we have that the solutions of the quadratic equation are given by:

Template:Rellink An alternative way of deriving the quadratic formula is via the method of Lagrange resolvents, which is an early part of Galois theory.[33] This method can be generalized to give the roots of cubic polynomials and quartic polynomials, and leads to Galois theory, which allows one to understand the solution of algebraic equations of any degree in terms of the symmetry group of their roots, the Galois group.

This approach focuses on the roots more than on rearranging the original equation. Given a monic quadratic polynomial

assume that it factors as

Since the order of multiplication does not matter, one can switch

and the values of p and q will not change: one says that p and q are symmetric polynomials in

The Galois theory approach to analyzing and solving polynomials is: given the coefficients of a polynomial, which are symmetric functions in the roots, can one "break the symmetry" and recover the roots? Thus solving a polynomial of degree n is related to the ways of rearranging ("permuting") n terms, which is called the symmetric group on n letters, and denoted

To find the roots

consider their sum and difference:

These are called the Lagrange resolvents of the polynomial; notice that one of these depends on the order of the roots, which is the key point. One can recover the roots from the resolvents by inverting the above equations:

Thus, solving for the resolvents gives the original roots.

Formally, the resolvents are called the discrete Fourier transform (DFT) of order 2, and the transform can be expressed by the matrix

The transform matrix is also called the DFT matrix or Vandermonde matrix.

is a symmetric function in

so it can be expressed in terms of p and q, and in fact

as noted above. But

is not symmetric, since switching

(formally, this is termed a group action of the symmetric group of the roots). Since

is not symmetric, it cannot be expressed in terms of the polynomials p and q, as these are symmetric in the roots and thus so is any polynomial expression involving them. Changing the order of the roots only changes

by a factor of

and thus the square

is symmetric in the roots, and thus expressible in terms of p and q. Using the equation

If one takes the positive root, breaking symmetry, one obtains:

Thus the roots are

which is the quadratic formula. Substituting

yields the usual form for when a quadratic is not monic. The resolvents can be recognized as

being the vertex, and

is the discriminant (of a monic polynomial).

A similar but more complicated method works for cubic equations, where one has three resolvents and a quadratic equation (the "resolving polynomial") relating

which one can solve by the quadratic equation, and similarly for a quartic (degree 4) equation, whose resolving polynomial is a cubic, which can in turn be solved. The same method for a quintic equation yields a polynomial of degree 24, which does not simplify the problem, and in fact solutions to quintic equations in general cannot be expressed using only roots.