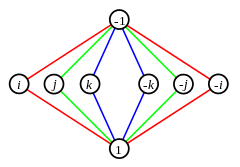 In group theory, the quaternion group is a non-abelian group of order eight, isomorphic to a certain eight-element subset of the quaternions under multiplication. It is often denoted by Q or Q8, and is given by the group presentation

where 1 is the identity element and −1 commutes with the other elements of the group.

The Q8 group has the same order as the Dihedral group, D4, but a different structure, as shown by their Cayley graphs:

The Cayley table (multiplication table) for Q is given by:[1]

The multiplication of pairs of elements from the subset {±i, ±j, ±k} works like the cross product of unit vectors in three-dimensional Euclidean space.

The quaternion group has the unusual property of being Hamiltonian: every subgroup of Q is a normal subgroup, but the group is non-abelian.[2] Every Hamiltonian group contains a copy of Q.[3]

In abstract algebra, one can construct a real four-dimensional vector space with basis {1, i, j, k} and turn it into an associative algebra by using the above multiplication table and distributivity. The result is a skew field called the quaternions. Note that this is not quite the same as the group algebra on Q (which would be eight-dimensional). Conversely, one can start with the quaternions and define the quaternion group as the multiplicative subgroup consisting of the eight elements {1, −1, i, −i, j, −j, k, −k}. The complex four-dimensional vector space on the same basis is called the algebra of biquaternions.

Note that i, j, and k all have order four in Q and any two of them generate the entire group. Another presentation of Q[4] demonstrating this is: 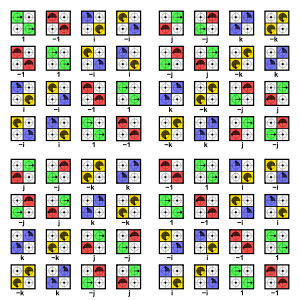 The quaternion group can be represented as a subgroup of the general linear group GL2(C). A representation

Since all of the above matrices have unit determinant, this is a representation of Q in the special linear group SL2(C). The standard identities for quaternion multiplication can be verified using the usual laws of matrix multiplication in GL2(C).[5]

There is also an important action of Q on the eight nonzero elements of the 2-dimensional vector space over the finite field F3. A representation

As Richard Dean showed in 1981, the quaternion group can be presented as the Galois group Gal(T/Q) where Q is the field of rational numbers and T is the splitting field, over Q, of the polynomial

The development uses the fundamental theorem of Galois theory in specifying four intermediate fields between Q and T and their Galois groups, as well as two theorems on cyclic extension of degree four over a field.[6]

The Brauer–Suzuki theorem shows that groups whose Sylow 2-subgroups are generalized quaternion cannot be simple.