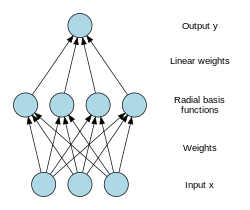 Radial basis function (RBF) networks typically have three layers: an input layer, a hidden layer with a non-linear RBF activation function and a linear output layer. The input can be modeled as a vector of real numbers

. The output of the network is then a scalar function of the input vector,

, and is given by

is the number of neurons in the hidden layer,

is the center vector for neuron

is the weight of neuron

in the linear output neuron. Functions that depend only on the distance from a center vector are radially symmetric about that vector, hence the name radial basis function. In the basic form all inputs are connected to each hidden neuron. The norm is typically taken to be the Euclidean distance (although the Mahalanobis distance appears to perform better in general{{ safesubst:#invoke:Unsubst||date=__DATE__ |$B= {{#invoke:Category handler|main}}{{#invoke:Category handler|main}}[citation needed] }}) and the radial basis function is commonly taken to be Gaussian

i.e. changing parameters of one neuron has only a small effect for input values that are far away from the center of that neuron.

Given certain mild conditions on the shape of the activation function, RBF networks are universal approximators on a compact subset of

. [4] This means that an RBF network with enough hidden neurons can approximate any continuous function with arbitrary precision.

are determined in a manner that optimizes the fit between 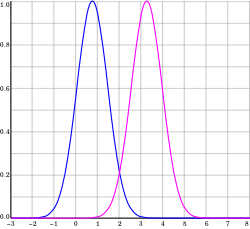 In addition to the above unnormalized architecture, RBF networks can be normalized. In this case the mapping is

is known as a "normalized radial basis function".

There is theoretical justification for this architecture in the case of stochastic data flow. Assume a stochastic kernel approximation for the joint probability density

The probability densities in the input and output spaces are

The expectation of y given an input

is the conditional probability of y given

when the integrations are performed.

in the unnormalized and normalized cases, respectively. Here

are weights to be determined. Higher order linear terms are also possible.

This result can be written

in the normalized case.

is a Kronecker delta function defined as

RBF networks are typically trained by a two-step algorithm. In the first step, the center vectors

of the RBF functions in the hidden layer are chosen. This step can be performed in several ways; centers can be randomly sampled from some set of examples, or they can be determined using k-means clustering. Note that this step is unsupervised. A third backpropagation step can be performed to fine-tune all of the RBF net's parameters.[3]

The second step simply fits a linear model with coefficients

We have explicitly included the dependence on the weights. Minimization of the least squares objective function by optimal choice of weights optimizes accuracy of fit.

There are occasions in which multiple objectives, such as smoothness as well as accuracy, must be optimized. In that case it is useful to optimize a regularized objective function such as

where optimization of S maximizes smoothness and

is known as a regularization parameter.

RBF networks can be used to interpolate a function

when the values of that function are known on finite number of points:

the weights can be solved from the equation

It can be shown that the interpolation matrix in the above equation is non-singular, if the points

are distinct, and thus the weights

can be solved by simple linear algebra:

If the purpose is not to perform strict interpolation but instead more general function approximation or classification the optimization is somewhat more complex because there is no obvious choice for the centers. The training is typically done in two phases first fixing the width and centers and then the weights. This can be justified by considering the different nature of the non-linear hidden neurons versus the linear output neuron.

Basis function centers can be randomly sampled among the input instances or obtained by Orthogonal Least Square Learning Algorithm or found by clustering the samples and choosing the cluster means as the centers.

The RBF widths are usually all fixed to same value which is proportional to the maximum distance between the chosen centers.

Pseudoinverse solution for the linear weights

have been fixed, the weights that minimize the error at the output are computed with a linear pseudoinverse solution:

The existence of this linear solution means that unlike multi-layer perceptron (MLP) networks, RBF networks have a unique local minimum (when the centers are fixed).

is a "learning parameter."

For the case of training the linear weights,

in the normalized case.

For the case of training the linear weights,

in the normalized case and

Figure 6: Logistic map time series. Repeated iteration of the logistic map generates a chaotic time series. The values lie between zero and one. Displayed here are the 100 training points used to train the examples in this section. The weights c are the first five points from this time series.

The basic properties of radial basis functions can be illustrated with a simple mathematical map, the logistic map, which maps the unit interval onto itself. It can be used to generate a convenient prototype data stream. The logistic map can be used to explore function approximation, time series prediction, and control theory. The map originated from the field of population dynamics and became the prototype for chaotic time series. The map, in the fully chaotic regime, is given by

where t is a time index. The value of x at time t+1 is a parabolic function of x at time t. This equation represents the underlying geometry of the chaotic time series generated by the logistic map.

Figure 7: Unnormalized basis functions. The Logistic map (blue) and the approximation to the logistic map (red) after one pass through the training set.

Since the input is a scalar rather than a vector, the input dimension is one. We choose the number of basis functions as N=5 and the size of the training set to be 100 exemplars generated by the chaotic time series. The weight

is taken to be a constant equal to 5. The weights

are five exemplars from the time series. The weights

are trained with projection operator training:

where the learning rate

is taken to be 0.3. The training is performed with one pass through the 100 training points. The rms error is 0.15. 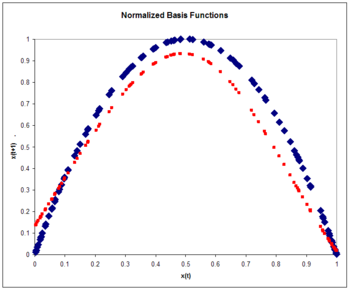 Figure 8: Normalized basis functions. The Logistic map (blue) and the approximation to the logistic map (red) after one pass through the training set. Note the improvement over the unnormalized case.

The normalized RBF architecture is

Again, we choose the number of basis functions as five and the size of the training set to be 100 exemplars generated by the chaotic time series. The weight

is taken to be a constant equal to 6. The weights

are five exemplars from the time series. The weights

are trained with projection operator training:

where the learning rate

is again taken to be 0.3. The training is performed with one pass through the 100 training points. The rms error on a test set of 100 exemplars is 0.084, smaller than the unnormalized error. Normalization yields accuracy improvement. Typically accuracy with normalized basis functions increases even more over unnormalized functions as input dimensionality increases. 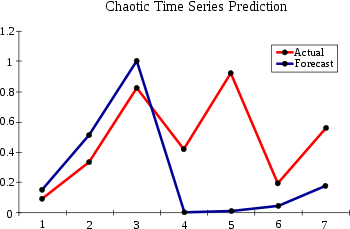 Control of a chaotic time series

. This can be done if we choose the control paramer to be

is an approximation to the underlying natural dynamics of the system.

The learning algorithm is given by