Radiosity is a convenient quantity in optics and heat transfer that represents the total radiant flux density (i.e. power per area) of the radiation leaving a surface.[1] Sometimes it is defined differently as the total radiant intensity leaving the surface,[2] which has different units. In many other fields it is instead called radiant exitance. Radiosity accounts for two components: the radiation being emitted by the surface, and the radiation being reflected from the surface. In heat transfer, combining these two factors into one radiosity term helps in determining the net energy exchange between multiple surfaces.

Realistically, the radiances from emitted radiation 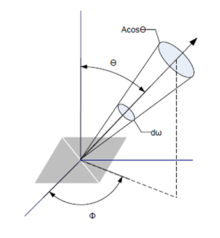 is the surface area, and

is the solid angle. The

term accounts for the projected area of the surface at an angle. Now, to find the radiosity, the radiance is integrated over a hemispherical surface enclosing the surface patch for all angles.

Assuming a diffuse emitter and reflector,

. Furthermore, for a blackbody,

and the radiosity reduces to

To generalize further, the radiosity can also be expressed as a function of the wavelength of the radiation – the spectral radiosity. 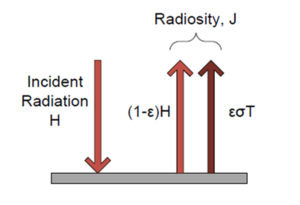 , for a gray, diffuse surface, is the sum of the reflected and emitted irradiances. Or,

is the gray body radiation due to temperature

is the incident radiation. Normally,

is the unknown variable and will depend on the surrounding surfaces. So, if some surface

is being hit by radiation from some other surface

, then the radiation energy incident on surface

. So, the incident irradiance is the sum of radiation from all other surfaces per unit surface of area

is the view factor, or shape factor, from surface

and substituting the incident irradiance into the original equation for radiosity, produces

surface enclosure, this summation for each surface will generate

unknown temperatures. For an enclosure with only a few surfaces, this can be done by hand. But, for a room with many surfaces, linear algebra and a computer are necessary.

Once the radiosities have been calculated, the net heat transfer at a surface can be determined by finding the difference between the incoming and outgoing energy.

Using the equation for radiosity,

, can be eliminated from the above to obtain

For an enclosure consisting of only a few surfaces, it is often easier to represent the system with an analogous circuit rather than solve the set of linear radiosity equations. To do this, the heat transfer at each surface,

is known as the surface resistance. Likewise,

is the blackbody radiation minus the radiosity and serves as the 'potential difference.' These quantities are formulated to resemble those from an electrical circuit

Now performing a similar analysis for the heat transfer from surface

Because the above is between surfaces,

is known as the space resistance and

serves as the potential difference.

Combining the surface elements and space elements, a circuit is formed. The heat transfer is found by using the appropriate potential difference and equivalent resistances, similar to the process used in analyzing electrical circuits.[4]

In the radiosity method and circuit analogy, several assumptions were made to simplify the model. The most significant is that the surface is a diffuse emitter. In such a case, the radiosity does not depend on the angle of incidence of reflecting radiation and this information is lost on a diffuse surface. In reality, however, the radiosity will have a specular component from the reflected radiation . So, the heat transfer between two surfaces relies on both the view factor and the angle of reflected radiation.

Yet another assumption is that the surfaces are isothermal. If they are not, then the radiosity will vary as a function of position along the surface. However, this problem is solved by simply subdividing the surface into smaller elements until the desired accuracy is obtained.[5]