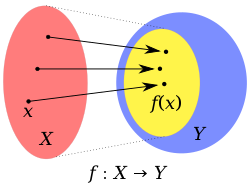 is a function from domain X to codomain Y. The smaller oval inside Y is the image of

. Sometimes "range" refers to the image and sometimes to the codomain.

In mathematics, and more specifically in naive set theory, the range of a function refers to either the codomain or the image of the function, depending upon usage. Modern usage almost always uses range to mean image.

The image of a function is the set of all outputs of the function. The image is always a subset of the codomain.

Distinguishing between the two uses

As the term "range" can have different meanings, it is considered a good practice to define it the first time it is used in a textbook or article.

As an example of the two different usages, consider the function

as it is used in real analysis, that is, as a function that inputs a real number and outputs its square. In this case, its codomain is the set of real numbers

, but its image is the set of non-negative real numbers

is never negative if

is real. For this function, if we use "range" to mean codomain, it refers to

. When we use "range" to mean image, it refers to

As an example where the range equals the codomain, consider the function

, which inputs a real number and outputs its double. For this function, the codomain and the image are the same (the function is a surjection), so the word range is unambiguous; it is the set of all real numbers.

When "range" is used to mean "codomain", the range of a function must be specified. It is often assumed to be the set of all real numbers, and {y | there exists an x in the domain of f such that y = f(x)} is called the image of f.

When "range" is used to mean "image", the range of a function f is {y | there exists an x in the domain of f such that y = f(x)}. In this case, the codomain of f must be specified, but is often assumed to be the set of all real numbers.

In both cases, image f ⊆ range f ⊆ codomain f, with at least one of the containments being equality.