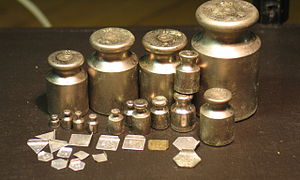 Mass measured in grams is a function from this collection of weights to positive real numbers. The term "weight function", an allusion to this example, is used in pure and applied mathematics.

Template:Functions In mathematics, a real-valued function or real function is a function whose values are real numbers. In other words, it is a function that assigns a real number to each member of its domain.

Real functions are not especially interesting in general, but many important function spaces are defined to consist of real functions.

to denote the set of all functions from Template:Mvar to real numbers R. Because R is a field,

is a vector space and a commutative algebra (structure) over reals:

Also, since R is an ordered set, there is a partial order on

is a partially ordered ring.

Continuous functions also form a vector space and an algebra as explained above, and are a subclass of measurable functions because any topological space has the σ-algebra generated by open (or closed) sets.

{{#invoke:main|main}} Real numbers are used as the codomain to define smooth functions. A domain of a real smooth function can be the real coordinate space (which yields a real multivariable function), a topological vector space,[1] an open subset of them, or a smooth manifold.

Spaces of smooth functions also are vector spaces and algebras as explained above, and are a subclass of continuous functions.

A measure on a set is a non-negative real-valued functional on a σ-algebra of subsets.[2] Lp spaces on sets with a measure are defined from aforementioned real-valued measurable functions, although they are actually quotient spaces. More precisely, whereas a function satisfying an appropriate summability condition defines an element of Lp space, in the opposite direction for any f ∈ Lp(X) and x ∈ X which is not an atom, the value f(x) is undefined. Though, real-valued Lp spaces still have some of the structure explicated above. Each of Lp spaces is a vector space and have a partial order, and there exists a pointwise multiplication of "functions" which changes Template:Mvar, namely