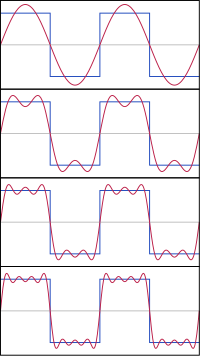 Construction of the real numbers

{{#invoke:main|main}} There are several ways of defining the real number system as an ordered field. The synthetic approach gives a list of axioms for the real numbers as a complete ordered field. Under the usual axioms of set theory, one can show that these axioms are categorical, in the sense that there is a model for the axioms, and any two such models are isomorphic. Any one of these models must be explicitly constructed, and most of these models are built using the basic properties of the rational number system as an ordered field. These constructions are described in more detail in the main article.

Order properties of the real numbers

However, while the results in real analysis are stated for real numbers, many of these results can be generalized to other mathematical objects. In particular, many ideas in functional analysis and operator theory generalize properties of the real numbers – such generalizations include the theories of Riesz spaces and positive operators. Also, mathematicians consider real and imaginary parts of complex sequences, or by pointwise evaluation of operator sequences.

{{#invoke:main|main}} A limit is the value that a function or sequence "approaches" as the input or index approaches some value.[2] Limits are essential to calculus (and mathematical analysis in general) and are used to define continuity, derivatives, and integrals.

{{#invoke:main|main}} A function from the set of real numbers to the real numbers can be represented by a graph in the Cartesian plane; such a function is continuous if, roughly speaking, the graph is a single unbroken curve with no "holes" or "jumps".

There are several ways to make this intuition mathematically rigorous. These definitions are equivalent to one another, so the most convenient definition can be used to determine whether a given function is continuous or not. In the definitions below,

is a function defined on a subset I of the set R of real numbers. This subset I is referred to as the domain of f. Some possible choices include I=R, the whole set of real numbers, an open interval

or a closed interval

Here, a and b are real numbers.

The difference between being uniformly continuous, and being simply continuous at every point, is that in uniform continuity the value of δ depends only on ε and not on the point in the domain.

be an interval in the real line R. A function

is absolutely continuous on

if for every positive number

, there is a positive number

such that whenever a finite sequence of pairwise disjoint sub-intervals

The collection of all absolutely continuous functions on I is denoted AC(I).

The following conditions on a real-valued function f on a compact interval [a,b] are equivalent:[4]

(2) f has a derivative f ′ almost everywhere, the derivative is Lebesgue integrable, and

(3) there exists a Lebesgue integrable function g on [a,b] such that

If these equivalent conditions are satisfied then necessarily g = f ′ almost everywhere.

Equivalence between (1) and (3) is known as the fundamental theorem of Lebesgue integral calculus, due to Lebesgue.[5]

{{#invoke:main|main}} Given an infinite sequence of numbers { an }, a series is informally the result of adding all those terms together: a1 + a2 + a3 + · · ·. These can be written more compactly using the summation symbol ∑. An example is the famous series from Zeno's dichotomy and its mathematical representation:

The terms of the series are often produced according to a certain rule, such as by a formula, or by an algorithm.

which can be written in the more compact sigma notation as

A Fourier series decomposes periodic functions or periodic signals into the sum of a (possibly infinite) set of simple oscillating functions, namely sines and cosines (or complex exponentials). The study of Fourier series is a branch of Fourier analysis.

{{#invoke:main|main}} Formally, the derivative of the function f at a is the limit

If the derivative exists everywhere, the function is differentiable. One can take higher derivatives as well, by iterating this process.

{{#invoke:main|main}} The Riemann integral is defined in terms of Riemann sums of functions with respect to tagged partitions of an interval. Let [a,b] be a closed interval of the real line; then a tagged partition of [a,b] is a finite sequence

This partitions the interval [a,b] into n sub-intervals [xi−1, xi] indexed by i, each of which is "tagged" with a distinguished point ti ∈ [xi−1, xi]. A Riemann sum of a function f with respect to such a tagged partition is defined as

thus each term of the sum is the area of a rectangle with height equal to the function value at the distinguished point of the given sub-interval, and width the same as the sub-interval width. Let Δi = xi−xi−1 be the width of sub-interval i; then the mesh of such a tagged partition is the width of the largest sub-interval formed by the partition, maxi=1…n Δi. The Riemann integral of a function f over the interval [a,b] is equal to S if:

When the chosen tags give the maximum (respectively, minimum) value of each interval, the Riemann sum becomes an upper (respectively, lower) Darboux sum, suggesting the close connection between the Riemann integral and the Darboux integral.

{{#invoke:main|main}} Lebesgue integration is a mathematical construction that extends the integral to a larger class of functions; it also extends the domains on which these functions can be defined.

{{#invoke:main|main}} Distributions (or generalized functions) are objects that generalize functions. Distributions make it possible to differentiate functions whose derivatives do not exist in the classical sense. In particular, any locally integrable function has a distributional derivative.

Real analysis is an area of analysis that studies concepts such as sequences and their limits, continuity, differentiation, integration and sequences of functions. By definition, real analysis focuses on the real numbers, often including positive and negative infinity to form the extended real line. Real analysis is closely related to complex analysis, which studies broadly the same properties of complex numbers. In complex analysis, it is natural to define differentiation via holomorphic functions, which have a number of useful properties, such as repeated differentiability, expressability as power series, and satisfying the Cauchy integral formula.

In real analysis, it is usually more natural to consider differentiable, smooth, or harmonic functions, which are more widely applicable, but may lack some more powerful properties of holomorphic functions. However, results such as the fundamental theorem of algebra are simpler when expressed in terms of complex numbers.

Techniques from the theory of analytic functions of a complex variable are often used in real analysis – such as evaluation of real integrals by residue calculus.

Important results include the Bolzano–Weierstrass and Heine–Borel theorems, the intermediate value theorem and mean value theorem, the fundamental theorem of calculus, and the monotone convergence theorem.

Various ideas from real analysis can be generalized from real space to general metric spaces, as well as to measure spaces, Banach spaces, and Hilbert spaces.