In mathematics, real coordinate space of Template:Mvar dimensions, written RTemplate:Mvar (Template:IPAc-en Template:Respell) (R with superscript n, also written ℝn with blackboard bold R) is a coordinate space that allows several ([[placeholder variable|Template:Mvar]]) real variables to be treated as a single variable. With various numbers of dimensions (sometimes unspecified), Rn is used in many areas of pure and applied mathematics, as well as in physics. It is the prototypical real vector space and a frequently used [[#Euclidean space|representation of Euclidean Template:Mvar-space]]. Due to the latter fact, geometric metaphors are widely used for Rn, namely a plane for R2 and three-dimensional space for R3.

For any natural number Template:Mvar, the set Rn consists of all Template:Mvar-tuples of real numbers (R). It is called (the) "Template:Mvar-dimensional real space". Depending on its construction from Template:Mvar instances of the set R, it inherits some of the latter's structure, notably:

An element of Rn is written

where each xi is a real number.

Purely mathematical uses of Rn can be roughly classified as follows, although these uses overlap. First, linear algebra studies its own properties under vector addition and linear transformations and uses it as a model of any Template:Mvar-dimensional real vector space. Second, it is used in mathematical analysis to represent the domain of a function of Template:Mvar real variables in a uniform way, as well as a space to which the graph of a real-valued function of n − 1 real variables is a subset. The third use parametrizes geometric points with elements of Rn; it is common in analytic, differential and algebraic geometries.

Rn, together with supplemental structures on it, is also extensively used in mathematical physics, dynamical systems theory, mathematical statistics and probability theory.

In applied mathematics, numerical analysis, and so on, arrays, sequences, and other collections of numbers in applications can be seen as the use of Rn too.

The domain of a function of several variables

{{#invoke:main|main}} Any function f(x1, x2, … , xn) of Template:Mvar real variables can be considered as a function on Rn (that is, with Rn as its domain). The use of the real Template:Mvar-space, instead of several variables considered separately, can simplify notation and suggest reasonable definitions. Consider, for n = 2, a function composition of the following form:

where functions g1 and g2 are continuous. If

The coordinate space Rn forms an Template:Mvar-dimensional vector space over the field of real numbers with the addition of the structure of linearity, and is often still denoted Rn. The operations on Rn as a vector space are typically defined by

The zero vector is given by

and the additive inverse of the vector x is given by

This structure is important because any Template:Mvar-dimensional real vector space is isomorphic to the vector space Rn.

{{#invoke:main|main}} In standard matrix notation, each element of Rn is typically written as a column vector

and sometimes as a row vector:

The coordinate space Rn may then be interpreted as the space of all n × 1 column vectors, or all 1 × n row vectors with the ordinary matrix operations of addition and scalar multiplication.

{{safesubst:#invoke:anchor|main}}Any linear transformation is a continuous function (see below). Also, a matrix define an open map from Rn to Rm if and only if the rank of the matrix equals to Template:Mvar.

{{#invoke:main|main}} The coordinate space Rn comes with a standard basis:

To see that this is a basis, note that an arbitrary vector in Rn can be written uniquely in the form

The fact that real numbers, unlike many other fields, constitute an ordered field yields an orientation structure on Rn. Any full-rank linear map of Rn to itself either preserves or reverses orientation of the space depending on the sign of the determinant of its matrix. If one permutes coordinates (or, in other words, elements of the basis), the resulting orientation will depend on the parity of the permutation.

Diffeomorphisms of Rn or domains in it, by their virtue to avoid zero Jacobian, are also classified to orientation-preserving and orientation-reversing. It has important consequences for the theory of differential forms, whose applications include electrodynamics.

Another manifestation of this structure is that the point reflection in Rn has different properties depending on [[even and odd numbers|evenness of Template:Mvar]]. For even Template:Mvar it preserves orientation, while for odd Template:Mvar it is reversed (see also improper rotation).

Template:Rellink Rn understood as an affine space is the same space, where Rn as a vector space acts by translations. Conversely, a vector has to be understood as a "difference between two points", usually illustrated by a directed line segment connecting two points. The distinction says that there is no canonical choice of where the origin should go in an affine Template:Mvar-space, because it can be translated anywhere. 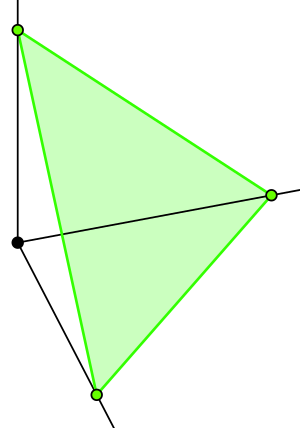 Another concept from convex analysis is a convex function from Rn to real numbers, which is defined through an inequality between its value on a convex combination of points and sum of values in those points with the same coefficients.

defines the norm | x | =Template:Sqrt on the vector space Rn. If every vector has its Euclidean norm, then for any pair of points the distance

is defined, providing a metric space structure on Rn in addition to its affine structure.

Conversely, the above formula for the Euclidean metric defines the standard Euclidean structure on Rn, but it is not the only possible one. Actually, any positive-definite quadratic form Template:Mvar defines its own "distance" Template:Sqrt, but it is not very different from the Euclidean one in the sense that

Such a change of the metric preserves some of its properties, for example the property of being a complete metric space. This also implies that any full-rank linear transformation of Rn, or its affine transformation, does not magnify distances more than by some fixed C2, and does not make distances smaller than 1 ∕ C1 times, a fixed finite number times smaller.Template:Clarification needed

The aforementioned equivalence of metric functions remains valid if Template:Sqrt is replaced with M(x − y), where Template:Mvar is any convex positive homogeneous function of degree 1, i.e. a vector norm (see Minkowski distance for useful examples). Because of this fact that any "natural" metric on Rn is not especially different from the Euclidean metric,Rn is not always distinguished from a Euclidean Template:Mvar-space even in professional mathematical works.

In algebraic and differential geometry

Although the definition of a manifold does not require that its model space should be Rn, this choice is the most common, and almost exclusive one in differential geometry.

On the other hand, Whitney embedding theorems state that any real [[differentiable manifold|differentiable Template:Mvar-dimensional manifold]] can be embedded into R2m. Template:Expand section

Other structures considered on Rn include the one of a pseudo-Euclidean space, symplectic structure (even Template:Mvar), and contact structure (odd Template:Mvar). All these structures, although can be defined in a coordinate-free manner, admit standard (and reasonably simple) forms in coordinates.

Rn is also a real vector subspace of Cn which is invariant to complex conjugation; see also complexification.

{{#invoke:see also|seealso}} There are three families of polytopes which have simple representations in Rn spaces, for any Template:Mvar, and can be used to visualize any affine coordinate system in a real Template:Mvar-space. Vertices of a hypercube have coordinates (x1, x2, … , xn) where each Template:Mvar takes on one of only two values, typically 0 or 1. However, any two numbers can be chosen instead of 0 and 1, for example −1 and 1. An Template:Mvar-hypercube can be thought of as the Cartesian product of Template:Mvar identical intervals (such as the unit interval Template:Closed-closed) on the real line. As an Template:Mvar-dimensional subset it can be described with a system of 2n inequalities:

but this can be expressed with a system of 2n linear inequalities as well.

The third polytope with simply enumerable coordinates is the standard simplex, whose vertices are Template:Mvar standard basis vectors and the origin (0, 0, … , 0). As an Template:Mvar-dimensional subset it is described with a system of n + 1 linear inequalities:

Replacement of all "≤" with "<" gives interiors of these polytopes.

The topological structure of Rn (called standard topology, Euclidean topology, or usual topology) can be obtained not only from Cartesian product. It is also identical to the natural topology induced by Euclidean metric discussed above: a set is open in the Euclidean topology if and only if it contains an open ball around each of its points. Also, Rn is a linear topological space (see continuity of linear maps above), and there is only one possible (non-trivial) topology compatible with its linear structure. As there are many open linear maps from Rn to itself which are not isometries, there can be many Euclidean structures on Rn which correspond to the same topology. Actually, it does not depend much even on the linear structure: there are many non-linear diffeomorphisms (and other homeomorphisms) of Rn onto itself, or its parts such as a Euclidean open ball or the interior of a hypercube).

Rn has the topological dimension Template:Mvar. An important result on the topology of Rn, that is far from superficial, is Brouwer's invariance of domain. Any subset of Rn (with its subspace topology) that is homeomorphic to another open subset of Rn is itself open. An immediate consequence of this is that Rm is not homeomorphic to Rn if m ≠ n – an intuitively "obvious" result which is nonetheless difficult to prove.

Despite the difference in topological dimension, and contrary to a naïve perception, it is possible to map a lesser-dimensional real space continuously and surjectively onto Rn. A continuous (although not smooth) space-filling curve (an image of R1) is possible.

Cases of 0 ≤ n ≤ 1 do not offer anything new: R1 is the real line, whereas R0 (the space of empty vectors) is a singleton, understood as a zero vector space. However, it is useful to include these as trivial cases of theories which are appropriate for different Template:Mvar. 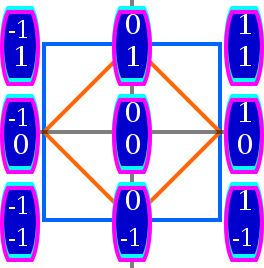 Both hypercube and cross-polytope in R2 are squares, but coordinates of vertices are arranged differently

Cube (the hypercube) and octahedron (the cross-polytope) of R3. Coordinates are not shown

Template:Rellink R4 can be imagined using the fact that 16 points (x1, x2, x3, x4), where each Template:Mvar is either 0 or 1, are vertices of a tesseract (pictured), the 4-hypercube (see above).

The first major use of R4 is a spacetime model: three spacial coordinates plus one temporal. This is usually associated with theory of relativity, although four dimensions were continuously used for such models since Galilei. The choice of theory leads to different structure, though: in Galilean relativity the Template:Mvar coordinate is privileged, but in Einsteinian relativity it is not. Special relativity is set in Minkowski space. General relativity uses curved spaces, which may be thought of as R4 with a curved metric for most practical purposes, though. Any of these structures does not provide a (positive) metric on R4.

Euclidean R4 also attracts the attention of mathematicians, for example due to its relation to quaternions, a 4-dimensional real algebra themselves. See rotations in 4-dimensional Euclidean space for some information.

In differential geometry, n = 4 is the only case where Rn admits a non-standard differential structure: see exotic R4.