Refractoriness is the fundamental property of any object of autowave nature (especially excitable medium) not to respond on stimuli, if the object stays in the specific refractory state. In common sense, refractory period is the characteristic recovery time, a period of time that is associated with the motion of the image point on the left branch of the isocline 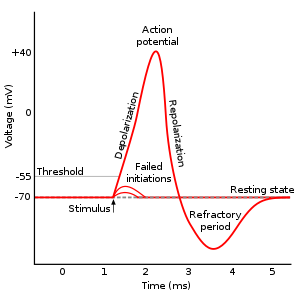 Schematic of an electrophysiological recording of an action potential showing the various phases that occur as the wave passes a point on a cell membrane.

{{#invoke:see also|seealso}} After initiation of an action potential, the refractory period is defined two ways:

The absolute refractory period coincides with nearly the entire duration of the action potential. In neurons, it is caused by the inactivation of the Na+ channels that originally opened to depolarize the membrane. These channels remain inactivated until the membrane hyperpolarizes. The channels then close, de-inactivate, and regain their ability to open in response to stimulus.

The relative refractory period immediately follows the absolute. As voltage-gated potassium channels open to terminate the action potential by repolarizing the membrane, the potassium conductance of the membrane increases dramatically. K+ ions moving out of the cell bring the membrane potential closer to the equilibrium potential for potassium. This causes brief hyperpolarization of the membrane, that is, the membrane potential becomes transiently more negative than the normal resting potential. Until the potassium conductance returns to the resting value, a greater stimulus will be required to reach the initiation threshold for a second depolarization. The return to the equilibrium resting potential marks the end of the relative refractory period. 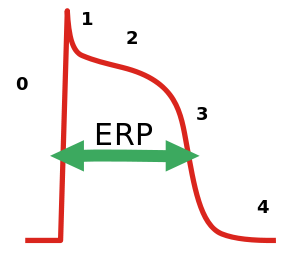 The cardiac refractory period can result in different forms of re-entry, which are a cause of tachycardia.[A: 1][B: 3] Vortices of excitation in the myocardium (autowave vortices) are a form of re-entry. Such vortices can be a mechanism of life-threatening cardiac arrhythmias. In particular, the autowave reverberator, more commonly referred to as spiral waves or rotors, can be found within the atria and may be a cause of atrial fibrillation.

Phase one is depolarization. During depolarization, voltage-gated sodium ion channels open, increasing the neuron's membrane conductance for sodium ions and depolarizing the cell's membrane potential (from typically -70 mV toward a positive potential). In other words, the membrane is made less negative. After the potential reaches the activation threshold (-55 mV), the depolarization is actively driven by the neuron and overshoots the equilibrium potential of an activated membrane (+30 mV).