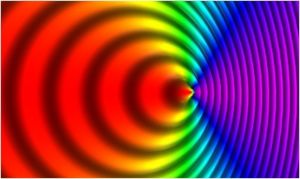 The relativistic Doppler effect is the change in frequency (and wavelength) of light, caused by the relative motion of the source and the observer (as in the classical Doppler effect), when taking into account effects described by the special theory of relativity.

Diagram 2. Demonstration of aberration of light and relativistic Doppler effect.

Diagram 3. The grey ellipse is a sphere moving relativistically at a constant velocity relative to an observer (blue dot); its oblate shape, as seen from our perspective, is due to Lorentz contraction. The colored ellipse is the sphere as seen by the observer. The background curves represent a grid (in xy coordinates) that is rigidly linked to the sphere; it is shown only at one moment in time.

Diagram 3 illustrates that the grid distortion is a relativistic optical effect, separate from the underlying Lorentz contraction which is the same for an object moving toward an observer or away.

Motion along the line of sight

is negative if the observer and the source are moving toward each other). Considering the problem in the reference frame of the source, suppose one wavefront arrives at the observer. The next wavefront is then at a distance

away from him (where

is the frequency of the wave the source emitted, and

is the speed of light). Since the wavefront moves with velocity

and the observer escapes with velocity

, the time (as measured in the reference frame of the source) between crest arrivals at the observer is

is the velocity of the observer in terms of the speed of light (see beta (velocity)).

Due to the relativistic time dilation, the observer will measure this time to be

is the Lorentz factor. The corresponding observed frequency is

is called the Doppler factor of the source relative to the observer. (This terminology is particularly prevalent in the subject of astrophysics: see relativistic beaming.) The corresponding wavelengths are related by

and the resulting redshift

In the non-relativistic limit (when

) this redshift can be approximated by

corresponding to the classical Doppler effect.

Let us repeat the derivation more systematically in order to show how the Lorentz equations can be used explicitly to derive a relativistic Doppler shift equation for waves that themselves are not relativistic.

Let there be two inertial frames of reference,

, constructed so that the axes of

is the time as measured in

is the time as measured in

be in motion relative to

; without loss of generality, we will take this motion to be directed only along the x-axis. Thus, the Lorentz transformation equations take the form 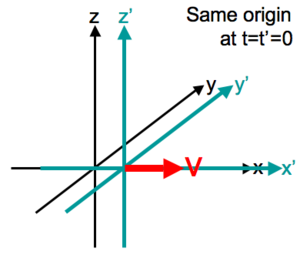 The system set up here is the standard one used in most physics text books (e.g. Landau and Lifshitz, The Classical Theory of Fields, Course of Theoretical Physics: Volume 2). The

is the speed of light in a vacuum.

The derivation begins with what the observer in

trivially sees. We imagine a signal source is positioned stationary at the origin,

system. We will take this signal source to produce its first pulse at time

(this is event 1) and its second pulse at time

is the frequency of the signal source as the observer in

sees it. We then simply use the Lorentz transformation equations to see when and where the observer in

sees these two events as occurring:

The period between the pulses as measured by the

observer is not, however,

. Note that this complication is not relativistic in nature: this is the ultimate cause of the Doppler effect and is also present in the classical treatment. This transit time is equal to the difference

divided by the speed of the pulse as the

observer sees it. If the pulse moves at speed

(negative because it moves in the negative x-direction, towards the

), then the speed of the pulse moving towards the observer at

using the Lorentz equation for the velocities, above. Thus, the period between the pulses that the observer in

and simplifying, we get the required result that gives the relativistic Doppler shift of any moving wave in terms of the stationary frequency,

Ignoring the relativistic effects by taking

For electromagnetic radiation where

is the wavelength of the source at the origin

as the observer in

For electromagnetic radiation, the limit to classical mechanics,

. This is the correct result for classical mechanics, although it is clearly in disagreement with experiment. It is correct since classical mechanics regards the maximum speed of interaction[note 1] — for electrodynamics, the speed of light — to be infinite. The Doppler effect, classical or relativistic, occurs because the wave source has time to move by the time that previous waves encounter the observer. This means that the subsequent waves are emitted further away (or closer) to the observer than they otherwise would be if the source were not in motion. The effect of this is to stretch (or compress) the wavelength of the wave as the observer encounters them. If however the waves travel instantaneously, the fact that the source is further away (or closer) makes no difference because the waves arrive at the observer no later or earlier than they would anyway since they arrive instantaneously. Thus, classical mechanics predicts that there should be no Doppler effect for light waves, whereas the relativistic theory gives the correct answer, as confirmed by experiment.[1]

Assuming the objects are not accelerated, light emitted when the objects are closest together will be received some time later. At reception, the amount of redshift will be

If the light is received when the objects are closest together, then it was emitted some time earlier. At reception, the amount of blueshift will be

Classical theory does not make a specific prediction for either of these two cases, as the shift depends on the motions relative to the medium.

In the frame of the receiver, θ0 represents the angle between the direction of the emitter at emission, and the observed direction of the light at reception. In the case when θ0 = π/2, the light was emitted at the moment of closest approach, and one obtains the transverse redshift

Sometimes the question arises as to how the transverse Doppler effect can lead to a redshift as seen by the "observer" whilst another observer moving with the emitter would also see a redshift of light sent (perhaps accidentally) from the receiver.

It is essential to understand that the concept "transverse" is not reciprocal. Each participant understands that when the light reaches him transversely as measured in terms of that person's rest frame, the other had emitted the light afterward as measured in the other person's rest frame. In addition, each participant measures the other's frequency as reduced ("time dilation"). These effects combined make the observations fully reciprocal, thus obeying the principle of relativity.

{{#invoke:main|main}} In practice, experimental verification of the transverse effect usually involves looking at the longitudinal changes in frequency or wavelength due to motion for approach and recession: by comparing these two ratios together we can rule out the relationships of "classical theory" and prove that the real relationships are "redder" than those predictions. The transverse Doppler shift is central to the interpretation of the peculiar astrophysical object SS 433.

The first longitudinal experiments were carried out by Herbert E. Ives and Stilwell in (1938), and many other longitudinal tests have been performed since with much higher precision.[2] Also a direct transverse experiment has verified the redshift effect for a detector actually aimed at 90 degrees to the object.[3]

Motion in an arbitrary direction

If, in the reference frame of the observer, the source is moving away with velocity

relative to the direction from the observer to the source (at the time when the light is emitted), the frequency changes as

In the particular case when

one obtains the transverse Doppler effect:

Due to the finite speed of light, the light ray (or photon, if you like) perceived by the observer as coming at angle

, was, in the reference frame of the source, emitted at a different angle

are tied to each other via the relativistic aberration formula:

Therefore, Eq. (1) can be rewritten as

For example, a photon emitted at the right angle in the reference frame of the emitter (

) would be seen blue-shifted by the observer:

In the non-relativistic limit, both formulæ (1) and (2) give

The Doppler effect (with arbitrary direction) also modifies the perceived source intensity: this can be expressed concisely by the fact that source strength divided by the cube of the frequency is a Lorentz invariant[4] (here, "source strength" refers to spectral intensity in frequency, i.e., power per unit solid angle and per unit frequency, expressed in watts per steradian per hertz; for spectral intensity in wavelength, the cube should be replaced by a fifth power). This implies that the total radiant intensity (summing over all frequencies) is multiplied by the fourth power of the Doppler factor for frequency.

As a consequence, since Planck's law describes the black body radiation as having a spectral intensity in frequency proportional to

For general accelerated motion, or when the motions of the source and receiver are analyzed in an arbitrary inertial frame, the distinction between source and emitter motion must again be taken into account.

The Doppler shift when observed from an arbitrary inertial frame:[5]

is the velocity of the source at the time of emission

is the velocity of the receiver at the time of reception

is the light velocity vector

, which causes the frequency measured by the receiver

to increase relative to the frequency emitted at the source

, which causes the frequency measured by the receiver

to decrease relative to the frequency emitted at the source

This is the classical Doppler effect multiplied by the ratio of the receiver and source Lorentz factors.

The transverse Doppler effect can be analyzed from a reference frame where the source and receiver have equal and opposite velocities. In such a frame the ratio of the Lorentz factors is always 1, and all Doppler shifts appear to be classical in origin. In general, the observed frequency shift is an invariant, but the relative contributions of time dilation and the Doppler effect are frame dependent.

|CitationClass=journal }} English translation: ‘On the Electrodynamics of Moving Bodies’